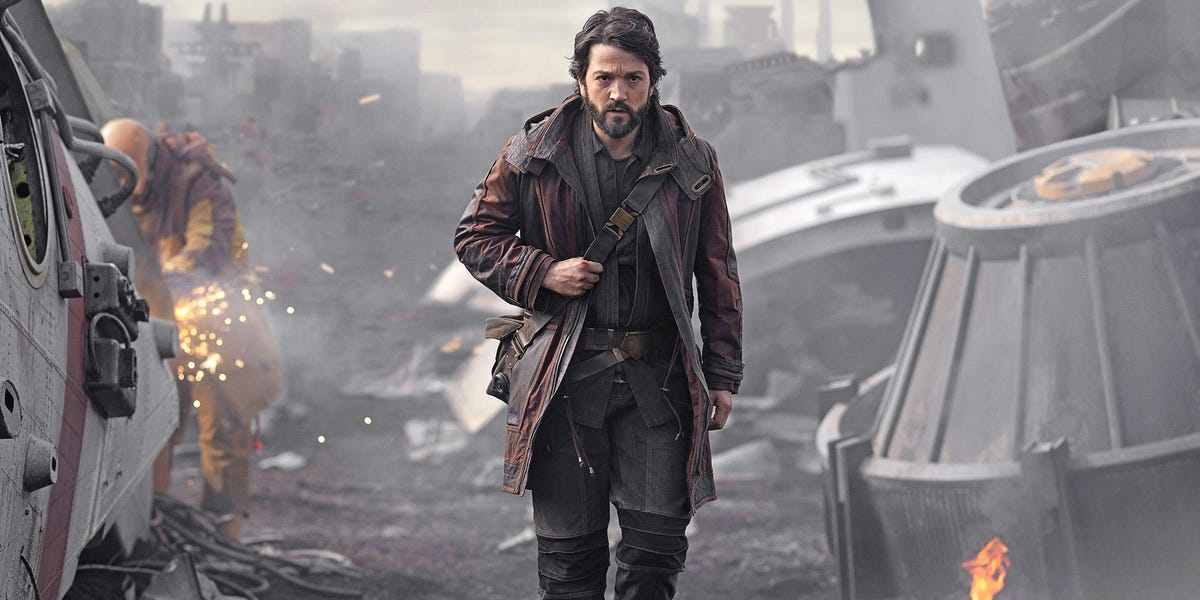 The series is set after the Galactic Empire formed in the prequel series.

“Andor” is set after the final movie of the “Star Wars” prequel trilogy, “Revenge of the Sith.”

At this point in the story, the Sith, an evil power-hungry group of space wizards, have formed a Galactic Empire.

The empire’s leaders, Darth Sidious and Darth Vader, have taken over the universe, killing their political opponents and wiping out their supernatural rivals, the Jedi.

“Star Wars” fans know that eventually, in the original trilogy, the Rebel Alliance is formed to defeat the Empire.

However, “Andor” sits between the two trilogies and will show how the rebellion is formed.

Cassian Andor is a spy for the Rebel Alliance, which is still forming at this point.

The character was first introduced in “Rogue One: A Star Wars Story” as a spy for the Rebel Alliance.

With a ragtag group of rebels, including the film’s lead Jyn Erso (Felicity Jones), he led a suicide mission on the planet Scarif to get plans for a secret Empire weapon.

That weapon turned out to be the Death Star, which was first introduced in the original trilogy.

“Andor” is set before “Rogue One,” because the character dies in that film, and will show how the character became involved with the rebellion and how he meets his allies such as his fan-favorite sidekick droid, K-2SO (Alan Tudyk).

“Andor” is a grounded story compared to the previous “Star Wars” series.

“Rogue One” was praised at the time of its release for its grounded story within the “Star Wars” universe.

Unlike previous films, it did not revolve around the Jedi and presented the story that everyone had a part to play in the rebellion, rather than focusing on a group of special individuals.

According to reviews of the new series, “Andor” appears to be grounded like “Rogue One.”

Mon Mothma is a key figure in the Rebel Alliance.

Mon Mothma first appeared in “Return of the Jedi” (played by Caroline Blakiston) as the Chancellor of the Rebel Alliance who leads the final attack against the Empire.

The character was meant to make another appearance in the prequel movie “Revenge of the Sith,” played by Genevieve O’Reilly, but the scene was later cut.

However, O’Reilly got a second chance to play the character in “Rogue One.”

“Rogue One” depicts Mothma after she is elected as the leader of the Rebel Alliance and tries to stop the mission to Scarif at the end of the movie.

“Andor” will show what Mothma was like before she became the leader of the rebellion as a double agent within the Empire’s capital, Coruscant. There she worked as a senator trying to gain the Empire’s secrets.

We have seen Saw Gerrera in “Rogue One” and “Star Wars: The Clone Wars.”

The Onderonian rebel was first introduced in the “Star Wars: The Clone Wars” series, where he was fighting in a civil war on his home planet to free his people from the Separatists led by Sith leader, Count Dooku.

During his mission, Gerrera worked with the Republic, a democratic galactic organization that was later corrupted by the Sith to form the Empire. When Gerrera makes his live-action debut (played by Forest Whitaker), he is a terrorist leader in order to combat the Empire’s new rule.

He was also killed by the Death Star in “Rogue One” but the new “Star Wars” series will show how his tactics caused a divide between the militant and peaceful sides of the rebellion.

“Andor” will be set in the same time period as “Star Wars Rebels.”

“Andor” is not the first “Star Wars” series to be set at the start of the rebellion.

The animated series “Star Wars Rebels” begins in 5 BBY in the universe’s timeline, the same year when “Andor” begins.

The hit series focused on a group of rebellious people who end up joining up with the wider rebellion against the Empire. Mothma even makes an appearance in season three when she is on the run from the Empire due to her association with the rebellion.

“Andor” may show key elements of the “Rebels” story in live action, such as Mothma’s escape from the Empire or the involvement of Ahsoka, Vader’s former apprentice, in the rebellion.

“Andor” premieres with three episodes on Disney+ on Wednesday.