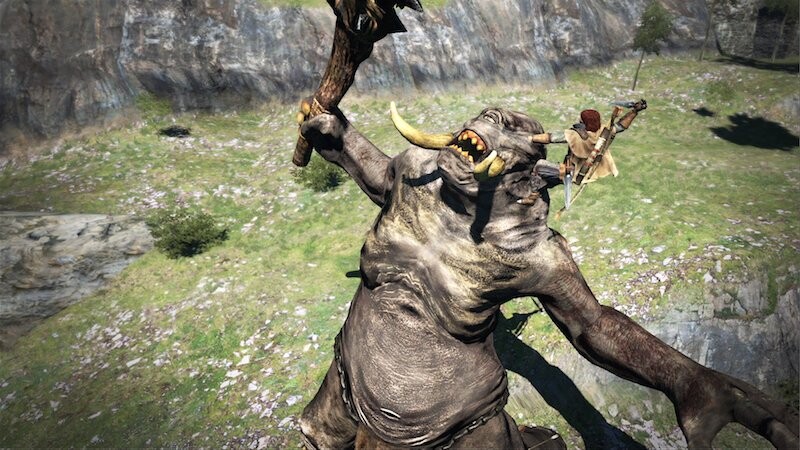 In the ‘2010s, Capcom earned the moniker of “Crapcom” in response to the company’s apparent decision to focus on making only awful games. That’s unfair because even though they managed to severely harm all of their legendary series with awful sequels, that’s also when Capcom released Dragon’s Dogma, a glorious breath of fresh air for the RPG genre. Dragon’s Dogma masterfully introduced climbing mechanics to solve combat problems that plague even recent masterpieces such as Elden Ring. Yeah, Elden Ring rocks, but we’ve all grown tired of battles against giant enemies that consist of stabbing them in the foot until we assume the wound grows infected and they die. The developers of Dragon’s Dogma were like “but what if the main character is just deranged to the point of climbing these giants and stabbing them in the face?” and guess what: it rules. But, more importantly, they also revolutionized romancing in games by (accidentally) making it the most hilarious thing.

Dragon’s Dogma features a romance system, but unlike series like Mass Effect and The Witcher, it doesn’t feel the need to go around boasting about it. Dragon’s Dogma plays romance so close to its chest that not even the main character (and player) knows they’re madly in love until the game tells them that they are. The mechanic works by secretly adding “love” points to the NPCs whenever we talk to them, and at some point, the game will warn players that the evil dragon has kidnapped their soulmate, and this soulmate is the NPC that the player has had more conversations with. This would probably work just great if only story-important characters were taken into account, but the game doesn’t play favorites, so most NPCs are up for the taking. That’s a problem because whereas players will usually only talk to the village’s hottest lady/gentleman a few times, chances are they’ll need to get a lot of goods from the merchant, an NPC whose heart is also available. This naturally has most of the first-time players falling in love with this middle-aged man: