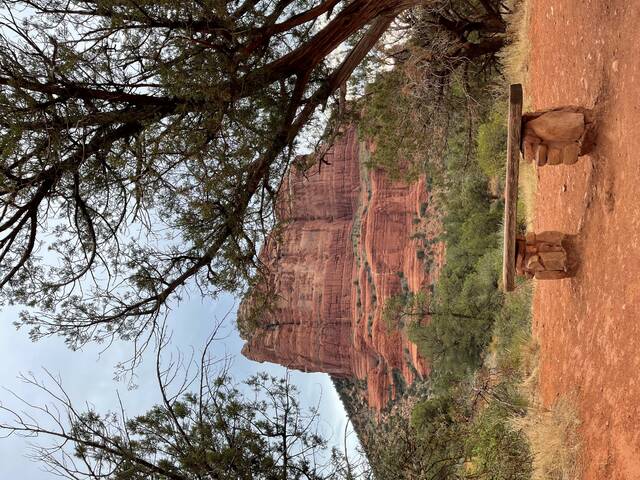 Under overcast skies, we entered the Bell Rock Trailhead in Sedona, Arizona. An incredible reddish-brown carpet of gravel covered the ground before us. Neatly outlined with wooden posts and knee-high walls of green shrubs, the path stretched out toward the trail’s namesake. Indeed, the butte did resemble a bell, I thought.

But I wouldn’t express that aloud. Not yet, anyway.

Engaging only in necessary conversation, such as a brief discussion to determine in which direction we should travel, my husband, middle son and I proceeded clockwise along the wide, well-marked trail. It was still early, before 7 a.m., and we’d spoken little since leaving Phoenix just after 4:30 a.m.

We have a well-established understanding in our family: early-morning conversations are discouraged. Unwelcome. And any of us, mostly me, who attempt to engage are duly met with growls or aggravated huffs. Or, we are lovingly, I’m sure, ignored.

So with just the sound of nature and an occasional passing car, our trio continued in relative silence along the trail that featured a gradual, but perceptible, incline.

While Bell Rock remained on our right, other significant rock formations adorned the remarkable red-rock landscape. Castle Rock and Courthouse Butte to name a few. Along with splashes of green, pale horizontal lines cut through the dominant red, providing texture and the illusion of layers to the formation’s appearance.

We easily navigated the path, as wire netting enclosed neatly stacked large stones, providing the base for wooden signs clearly marking the way. By the time we reached the rear of the formation, the sky had cleared and the sun had emerged from behind the clouds. Here, we met the option of climbing Bell Rock, of continuing on the trail or of turning back in the direction from which we had traveled.

And just as clearly as the first part of the trail was marked, so was this. My husband scaled the rocks a little further, and our son continued on around. But I was content, after finding a smooth place to rest on the open stone, to sit still and absorb the beauty.

Part of our plan to hike early involved beating the heat, and the 90-degree Sedona temperatures felt refreshing compared to the 114-degree heat we’d left behind in the Valley of the Sun.

Additionally, we’d hoped to beat the crowds. And up until that point, we’d only passed a few other hikers. But now, other families and some individuals had made it to where we were. So, I got up, and my son, who had returned, and I moved underneath a small tree and its modest shade until my husband rejoined us.

Together, we made our way back to the start of the trail, returning in the direction from which we began. As we continued to honor the silence, I couldn’t help but to become reflective. And, with each step we took, gratitude for our rare time spent together became as tangible an element as our stunning surroundings.

“So, you guys both agree the butte looks like a bell, right?” I finally dared to ask.

(Note: Marjorie Appelman is an English, communications and journalism teacher at Mason County High School and co-founder of the travel blog, Tales from the Trip, which is on Twitter, Instagram and Facebook. She can be reached at [email protected].)