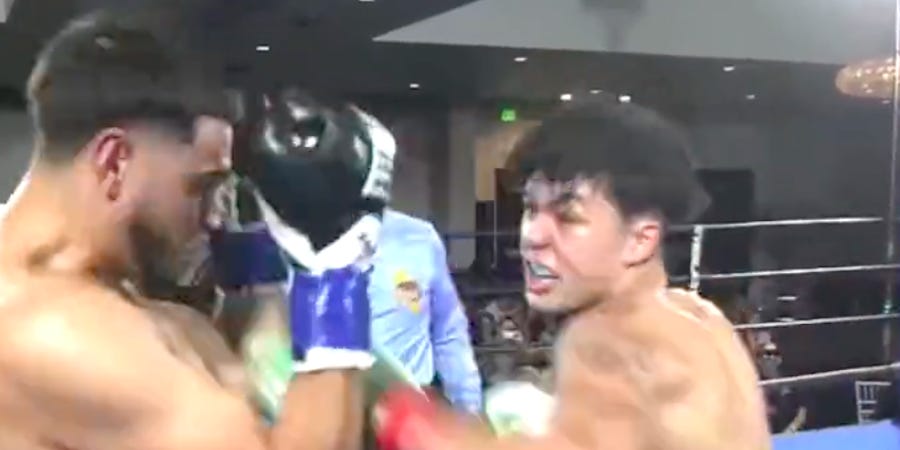 Insider was ringside for the brutal action at Quiet Cannon Country Club in Montebello, California.

We parked while the sun was still shining on golfers returning to their cars from the finely-manicured fairways, to put their clubs in their trunks.

Approximately 1,500 people assembled into the Banquet Hall, with drinks flowing and a grand spread of street food inviting hungry revelers to the fairy-light deck to enjoy unspoiled views of tricky golf holes.

After the sun went down, and a DJ spun loud Ramones records from his decks, the second fight of the night was a painful reminder that boxing, unlike golf, is a blood-and-guts sport.

The fight game is not one you play.

And Priest, a local kid from Los Angeles, was not in the mood to play around. He wanted to put on a show, and boy, did he deliver.

Within seconds of the opening bell, he had David Lopez from Pomona, California, on the ropes, wishing he was anywhere but a ring. All he could do was try to cover up while Priest delivered a good old fashioned, bludgeoning.

Priest threw slug after slug, mostly hooks and straight shots for good measure. All were powerful, and thrown with the worst of intentions.

One of the shots knocked Varela’s head back so violently it was clear he was dazed and confused.

The referee had no choice but to intervene.

It had barely even begun but it was already over.

Elsewhere on the card, Hollywood’s Marco Deckmann showed his intimidating finishing ability by putting Victor Fonseca Calderas away after two minutes and 42 seconds of the fourth round.

Earlier in the evening, Omar Cande Trinidad — buoyed by the support of the crowd —scored a thumping win over Ivan Varela.

After opening a bloody cut on Varela’s face in the opening round, Trinidad kept the pressure up to earn three scores of 59-55 and take home a unanimous decision win.