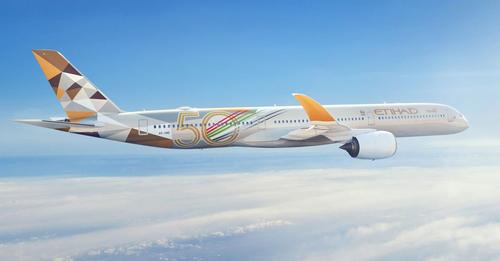 Formed as a partnership between Etihad, Airbus and Rolls Royce in 2021, the Sustainable50 programme will use Etihad’s A350s as flying testbeds for new initiatives, procedures and technologies to reduce carbon emissions. The programme drives operational efficiencies and supports Etihad’s decarbonisation efforts and builds on the learnings derived from Etihad’s similar Greenliner programme for the Boeing 787 aircraft type.

The aircraft, which accommodates 371 passengers, is one of five new Airbus A350s to join Etihad’s fleet this year. Following this, Etihad said all its flights servicing New York and Chicago O’Hare International Airport will be operated by the A350, joining Mumbai and Delhi routes that began flying in April this year.

“We are proud to bring the Airbus A350 into service in the US. This is an incredible aircraft with highly efficient fuel consumption and CO2 savings, enabling us to support our goals to reduce carbon emissions and deliver an unmatched flight experience for our guests,” remarked Martin Drew, Senior Vice President of Global Sales and Cargo, Etihad Airways.

This allows passengers bound for the US to process all immigration, customs and agriculture inspections in Abu Dhabi before they board their flight, avoiding immigration and queues on arrival, he added.