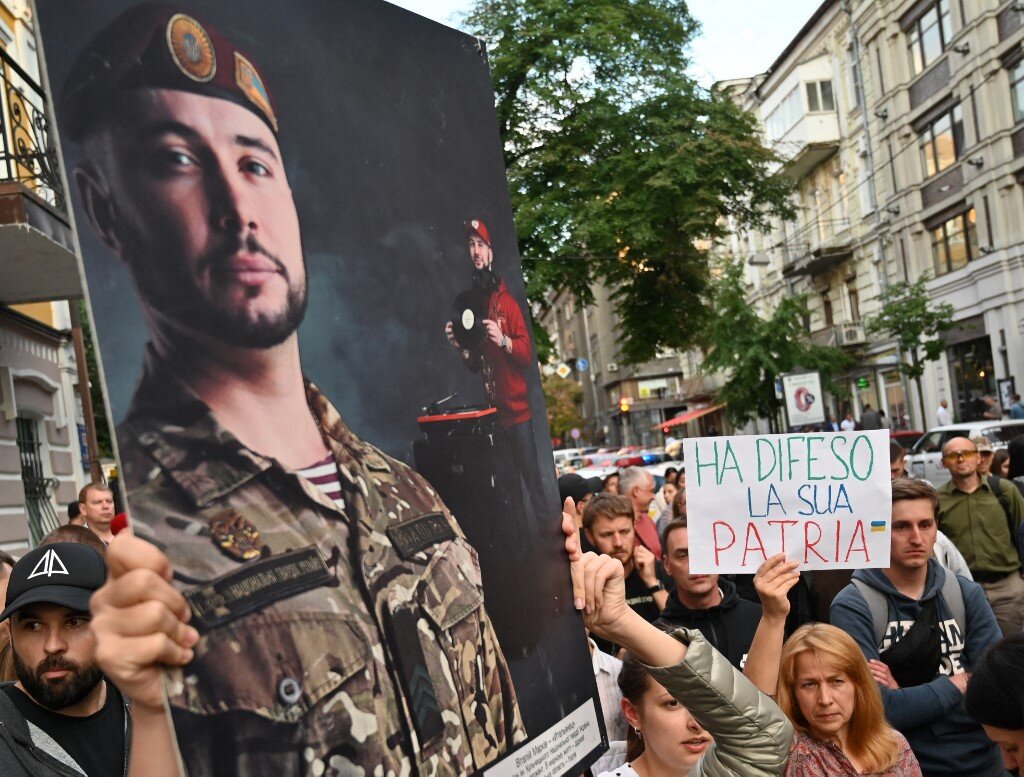 On Dec. 10, the Italian Corte di Cassazione, the highest court in the Italian judicial system, confirmed the acquittal of Vitaly Markiv, a former soldier of the Ukrainian National Guard, over the case of the reporter Andy Rocchelli and his interpreter Andrey Mironov, killed in Sloviansk, Ukrainian Donbas region, on May 24, 2014.

Markiv, which holds both Ukrainian and Italian citizenship, was detained in 2017 and sentenced after a long trial in 2019 to 24 years by the Court of Pavia, the city of the Rocchelli family.

Absolved and released on Appeal in 2020, Markiv’s case has been re-examined yet again at the request of the Appeal Prosecutor General. The Cassazione confirmed yesterday Markiv’s acqittal for “not having committed the fact”.

Andrea “Andy” Rocchelli was a 30 year-old Italian photo reporter, the author of several projects in war-torn areas, and co-founder of the photo collective “Cesura”, whose reportage had been published by “Le Monde” and “Wall Street Journal”, among others.

In, he took his last photos.

Andy was accompanied by the interpreter and long-time dissident Andrey Mironov. Arrested in 1985 for exfiltrating Samizdat publications, Mironov was among the founders of “Memorial” in 1987, and continued to be active in the human rights field through the ‘90s. In 2003, he was attacked in the streets of Moscow by a former police officer, which left him unconscious and wounded. Due to his closeness to the positions of the Italian “Partito Radicale”, Mironov was taken to Italy for recovery, and he continued criticizing Putin’s power vertical and denouncing human rights violations in Chechnya.

Along with Rocchelli and Mironov, the French reporter William Roguelon, who had joined the two in their May 24 working trip after meeting them in the Sloviansk hotel where they lived. Roguelon recalls the group exiting from the taxi that was taking them to a village bombed by the pro-Russian militias, in order to take pictures of a train used as a barricade to block the route. Small arms fire and then light artillery were aimed at them and their car. Rocchelli and Mironov were killed; Roguelon was wounded but managed to escape, after having noted the GPS coordinates where his colleagues’ deaths took place and informing the authorities. The killing of Rocchelli and Mironov was a difficult case. As noted by  Italy’s “Il Post” in this long and detailed article, the inquiries into what first appeared as an accident had to deal with several major obstacles: the state of war in Ukraine; lack of news from the Ukrainian side as “the Ukrainian government did not respond easily […] out of reticence or because it simply was not able to do it”; the place was difficult to reach and the crime scene could not be kept untouched; it was impossible to interview combatants from both sides, and, in any case, if suspect were to be identified, how to prosecute them in Italy?

But the family and the community needed an answer.

In this context, the identification of Vitaly Markiv, an Italian citizen, seems a remarkable coincidence and somehow fortuitous, given the few details on Markiv’s identification provided by the 2019 sentence (that you can fully read here).

Here, the “smoking gun” was a small article which appeared in “Corriere della Sera” on May 25. It was an interview with an anonymous Ukrainian officer, quoted as saying “we do not usually shoot towards cities and civilians, but when we see some motion we charge the heavy artillery. It happened this way with the two journalists and the interpreter’s car.”

In Pavia, the article was taken as a confession by the anonymous source, later easily identified as Vitaly Markiv, which, due to his Italian language skills became a reference for the Italian journalists covering Donbas war.

But the reliability of the article as a “smoking gun” has been widely disputed. It later turned out that the “anonymous source” never directly spoke to the article’s author, and that his verbatim quotes were instead paraphrased. As a result, the Markiv trial became a highly controversial issue from the start, creating opposing factions among investigators and the public opinion, and ending up as a diplomatic hot potato for Italy and Ukraine.

In Italy, the Markiv case gave room to a harsh political debate, with the opposing factions in large part ascribable to the usual divides among generally pro-Russian vs pro-European parties and politicians. The “Ukrainian crisis” was ongoing, and Markiv’s case became yet another piece of the battle at large. Along with politically engaged participants, though, the debate included independent voices, including the Rocchelli family and the FNSI (National Federation of the Italian Press), convinced of Markiv’s guilt, on one side; and  FIDU (Italian Federation for Human Rights) and the “International Study Group for an Independent Analysis” (founded ad hoc by Russia’s “Memorial” and Ukraine’s “Center for Civil Liberties”), denouncing the trial as marred by misconceptions and prejudices.

In the media environment, the case of two articles, published by reputable sources and particularly harsh towards Markiv, stirred criticism from other journalists and from the Ukrainian community.

The long shadow of Russian propaganda.

Italy is used to heightened and polarizing debates over public issues. But the Markiv case was not business as usual. In December 2019, Anna Momigliano wrote in the New York Times “How Propaganda Showed Up in an Italian Murder Trial”. The article pointed out how material from known sources of Russian propaganda, like “Russkaja Vesna” or “Russia Today”, was included – as pillars – in the body of evidence against Markiv.

Olha Tokariuk, a journalist covering the trial for Hromadske.tv, has published a detailed study explaining why Russian propaganda occupied an invisible seat in the Court judging Markiv.

The invisible attendee’s shadow was well visible, not only in the trial proceedings themselves. The whole prosecution seemed to be constructed on wrong conceptions about the Russo-Ukrainian conflict in general, that resulted in a distorted vision of the specific case. You can read the details in her study.

Ukraine does not often make the news in Italy, but when it does, it’s usually controversial. A cemented pro-Russian universe remains constantly active in depicting what happens in the former Soviet-dominated in a foggy, Cold War style revisionist manner when it comes to local protests and struggle against Russian aggression. This kind of propaganda is often conveyed – if unwittingly – even in the mainstream media, but those regular outlets are more often than not laconic about this part of the world..

The case of Markiv, who was used as a scapegoat to provide an answer to the tragic deaths of Rocchelli and Mironov, has now been brought to an end. Before being released in 2020, the 30-year-old Markiv had already served three years in jail. During the trial, no part of the investigation was devoted to inquiring whether the journalist victim may have been killed by pro-Russian separatist fire. The area, at that time, was under Strelkov’s (Igor Girkin) command.