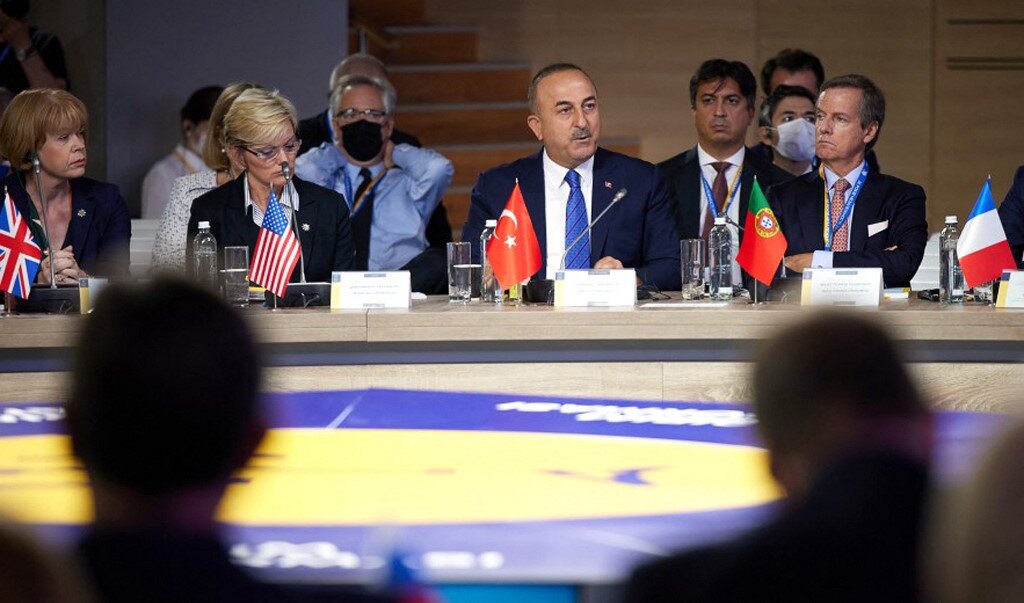 The greatest achievement of Ukraine’s foreign policy in 2021 was the creation of the Crimea Platform.
This is one of the results of the annual expert survey of the Foreign Policy Council “Ukrainian Prism”, conducted on Dec. 8-15. A total of 103 representatives of think tanks, academics, and media commentators participated in the study.

The majority of respondents – 52% – rated the implementation of Ukraine’s foreign policy in terms of ensuring national interests in 2021 at 3 out of 5. This is slightly higher than last year: in 2020, 48% of the surveyed experts gave 3 points to the external actions of the Ukrainian state. At the same time, increasing the number of more favorable assessments is worth mentioning. If last year 29% of respondents voted for 4 points, this year it is 38%. Thus, in 2020, 23% of participants of research gave 2 points, and in 2021 – only 7%.

The main obstacles to the implementation of a more effective foreign policy of the Ukrainian state, the surveyed experts saw in Russia’s aggression against Ukraine, personnel problems, and lack of coordination between the different state bodies.

These answers were chosen by 60%, 58%, and 52% of respondents, respectively. It should be noted that the result of the last year’s study showed other top 3 limitations for the effective work of Ukrainian diplomacy. At that time all of them were related to internal challenges. Those were the lack of a strategic vision of foreign policy, lack of coordination between the different state bodies and personnel problems (options are listed in order from more to less popular).

Speaking about the results of Ukraine’s foreign policy, experts called the creation of the Crimea Platform the greatest achievement of 2021. This option was chosen by 46% of respondents – and it left far behind other points. Another significant success of Ukrainian diplomacy was keeping international support in countering Russia’s aggression – 17% of the survey participants mentioned it. The development of relations between Ukraine and the United States, in particular as a result of the signing of the Charter on Strategic Partnership, was named by 9% of experts as the main achievement. Last year, respondents highlighted Ukraine’s status as NATO’s Enhanced Opportunity Partner, the signing of the Strategic Partnership Agreement with the United Kingdom, and sanctions against the Russian Federation within the key success of Ukrainian diplomacy.

The main failure of Ukraine’s foreign policy in 2021, in experts’ view, was the completion of the Nord Stream 2 gas pipeline.

This option was chosen by 20% of respondents. The next most popular answer is interesting, as it is related to the events of 2020 and is also connected to the domestic political processes in Ukraine. Thus, 10% of surveyed experts called the events around “Wagnergate” the main failure in 2021 in the external actions of the Ukrainian state. The list of the top three failures with the largest number of votes was closed by the option “Weakening of positions among international partners.” It was chosen by 7% of respondents. In 2020, experts mentioned the deterioration of relations with Hungary, the stagnation of the Normandy format and the lack of progress in the Donbas as the main failures of foreign policy. All three options appeared in the answers this year as well. But they did not have such strong support.

The set of five countries that the surveyed experts consider to be the friendliest to Ukraine has not changed in the 2021 study, compared to 2020. However, their location in the rankings has changed. Lithuania took the first position again – it was chosen by 68% of respondents. For the first time in several years, the United Kingdom was in second place: 52% of the participants of the research defined it. The third and the fourth place are shared by the United States and Poland, which have been chosen by 47% of respondents. Last year, the American partners in this list were also in the third place, and the Polish – in the fifth. Canada closes the ranking of the top 5 states most friendly to Ukraine. For several years in a row, this country had been occupying the second position. 35% of the polled experts voted for it.

96% of experts named Russia as the most hostile state to Ukraine.

The first position in this list remains unchanged throughout the years of the survey. But the second position changed for the first time in four years. This year, 70% of respondents named Belarus one of the most hostile states to Ukraine. Previously, this place remained behind Hungary, which in 2021 moved to the third place. In general, 36% of respondents consider it an opponent of Ukraine in foreign policy. Last year, the figure was 54%. China and Germany ranked the fourth and the fifth position in the list for the first time, with 12% and 4% of experts calling them hostile to official Kyiv.

Most of the surveyed experts – 82% – called countering Russia’s aggression the main priority of Ukraine’s foreign policy for 2022. Euro-Atlantic integration is in the second position on the list of key tasks. This answer was chosen by 56% of respondents. Attracting foreign investment to Ukraine closes the top three priorities for Ukrainian diplomacy for the next year – 29%. In 2020, participants of the research also identified countering Russia’s aggression and Euro-Atlantic integration as the main objectives of the external actions. But the third place at that time went to the implementation of the Association Agreement with the EU. This year, 24% of respondents mentioned this, giving it the fourth place.