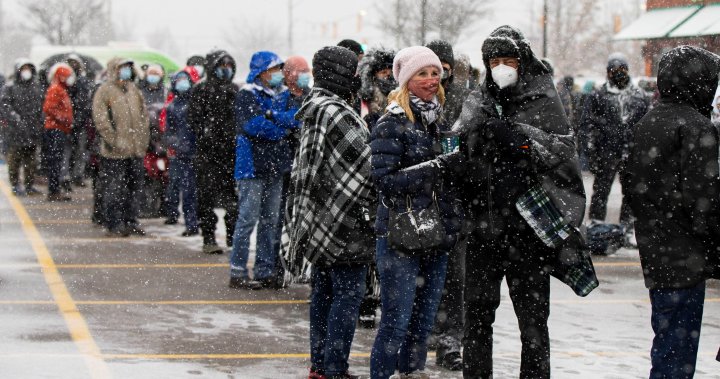 The discrepancies in rapid testing availability between Canadian provinces have been met with frustration as Omicron cases surge and Christmas plans hang in the balance.

While residents of Ontario, B.C., Alberta and Quebec scramble to get their hands on rapid tests, those in Saskatchewan, Nova Scotia and New Brunswick boast of easy access with systems already in place.

“This is a huge misstep on the part of multiple jurisdictions,” Dr. Alex Wong, infectious disease physician and clinician-researcher with the Saskatchewan Health Authority, told Global News.

“[Governments] had millions of tests literally sitting in warehouses, and for whatever reason, didn’t decide to make this an important priority.”

Rapid antigen tests, which use a shallow nasal swab, are typically less reliable than the polymerase chain reaction (PCR) test, but can deliver results in less than 15 minutes. They can be performed at home and used before a family gathering or large public events to help control transmission.

This is why they have been rolled out in certain provinces in schools and other public settings, as calls for them to be distributed for free Canada-wide grew louder.

Last week, the Ontario government heeded that call, with the announcement of a “holiday testing blitz,” which pledged two million free rapid tests to be distributed through pop-up locations such as malls, retail settings, holiday markets, public libraries, transit hubs and LCBO stores.

However, many of the provincial rollouts have been met with long queues and inadequate supply.

By Friday evening, the day Ontario’s campaign began, LCBO’s test supply had already run out. An LCBO spokesperson said they distributed 200,000 tests over the course of the day and had not received any more.

Our supply of COVID-19 rapid test kits has run out. Thanks for your patience & understanding. We’ll post if we receive more. Visit https://t.co/fYKqUymQya for info on screening & take-home kits at pop-ups across the province.

On Monday, Torontonians reported line-ups hundreds of people long at the pop-up testing site at Union Station, which opened at 7 a.m. and was out of tests about half an hour later.

Went to the union station rapid antigen test pickup at 8:30. It opened at 7 and was out by 7:20 because they were only given 1,000 tests. Then went to Shoppers & Rexall and neither sell the tests. How does this make any sense?

A spokesperson for the province said Ontario has “a limited supply of rapid tests” and had recently learned that “millions of tests expected to be received from the federal government have been delayed.”

“Every single test the province has received from the federal government is out the door to thousands of workplaces, hospitals, home and community care settings, long-term care homes, schools and child care centres on top of the many pop-up sites across the province,” the spokesperson said.

“Ontario is directly procuring additional rapid tests where possible, and we continue to urge the federal government to make more rapid tests available to provinces as quickly as possible.”

But Ontarians weren’t alone in their frustrations.

Quebec began its rapid-test rollout plan on Monday with people waiting in long lines at pharmacies throughout the province. Quebec has shipped the tests to pharmacies, who are responsible for giving them out. There are five tests in each kit, with one kit made available to each person aged 14-and-older every month.

In Alberta, the government on Friday distributed more than 157,000 rapid test kits, amid huge demand.

There were long lines at several sites Friday, with some Albertans reporting they were not able to get a kit, despite visiting multiple sites.

Alberta Health said there are two million more rapid tests on hand that will be distributed in the coming days, and another one million additional tests are set to be shipped later this month.

The rollout of rapid antigen test kits was announced by Premier Jason Kenney last week, as the province also announced eased COVID-19 public health restrictions ahead of the holidays.

In B.C., rapid tests are being prioritized for areas with higher transmission and outbreaks, rather than for the general population.

About 700,000 rapid tests are available for home use, but provincial health officer Dr. Bonnie Henry has said it’s challenging to break down the large packages of testing fluid into smaller kits. She said B.C. hopes single-dose bottles of the testing solution arrive by the end of December.

Nova Scotia vows not to ‘keep tests on a shelf’

Meanwhile, frustrated residents unable to get their hands on testing kits have looked to other provinces with envy.

Nova Scotia has been handing out tests in public settings since early December. On Dec. 13, that was extended to public libraries across the province, with 400,000 kits available. However, as of Monday, all locations of Halifax Public Libraries had run out.

This is how we get rapid tests in Nova Scotia. No frills, free from the province, two bags per person and two tests per bag. Speed speed speed. pic.twitter.com/3g5BV7ocU0

Incoming travellers at the airports in Sydney and Halifax airports are also being provided tests, and about 2,000 businesses and organizations in the province are providing rapid tests for employees.

Free rapid tests available for everyone in Nova Scotia. You can even pick ’em up at the liquor store! #cdnpoli pic.twitter.com/PTJxoq2Kbt

More tests are also being handed out to children aged three to 11 through public and private schools, licensed and unlicensed child-care centres and family resource centres.

Dr. Lisa Barrett, an infectious disease specialist and a clinician at Dalhousie University in Halifax, who helped spearhead the early adoption of widespread rapid test use in the province, said Nova Scotia had focused on testing people who did not have COVID-19 symptoms.

“We have a no symptom testing stream, in addition to all of our other testing, that uses rapid tests to make sure we can identify people who might be infectious early,” Barrett said.

“The idea is that we do not keep rapid tests on a shelf that we make sure that we’re getting them out into the hands of Nova Scotians in various different ways to use for early diagnosis.”

2:10
COVID-19: N.S. doctor on the success of their rapid testing program amid Omicron variant spread

COVID-19: N.S. doctor on the success of their rapid testing program amid Omicron variant spread

Barrett said the province had been constantly asking the federal government for more tests to ensure they had enough in stock to keep up their supply. But as stocks inevitably dried up, they would need to reassess how they were distributed.

“Every well has a bottom. And as people get more and more worried about Omicron, and about COVID, we do come to a point now where we’re going to have to figure out with the supply that we have, which is not infinite, how we manage the next piece.”

Eventually, it could mean those in high-risk settings are prioritized and people who are symptomatic should simply isolate and identify their contacts on the assumption that they are positive, rather than having to seek out a test.

While Barrett insisted rapid testing should be a priority for provincial governments, people should know that they “have other tools in the toolbox to keep them safe,” such as social distancing and being vaccinated, and “tests are just an additional layer of protection.”

‘No meaningful role for PCR tests’

Wong said the province had successfully implemented the scheme after “a lot of initial hiccups.”

The province introduced the free testing in October as a way to avoid tougher restrictions in the face of the Delta variant, Wong said. While they were initially available at 18 chambers of commerce across the province, they were later distributed to a number of other public settings, such as libraries, police stations, co-ops and fire halls.

“So it’s really disappointing to see people waiting three, four hours for one box of five tests when I was able to go to the library yesterday with my family and get a couple of boxes,” he said.

Wong said the “philosophy around rapid testing has gradually shifted,” as PCR testing was prioritized as the more effective testing method. However, due to the current lack of PCR testing availability amid overwhelming demand, there was “no meaningful role for PCR tests for the general public.”

“We’re in a situation now … with the sheer number of cases of Omicron, the sheer number of contacts, that lab capacity just simply can’t keep up. People are waiting days to access PCR testing, which essentially makes it pretty much useless from a public health perspective for managing outbreaks,” he said.

“And the inability then for people to be able to identify their own situation using rapid tests is a huge downfall.”

New Brunswick has also continued its rollout of COVID-19 rapid test kits since they were first distributed across the province in October.

Public health set up 20 distribution centres around the province with kits available.

The province hasn’t said how many rapid test kits have been distributed in total since October, and Vitalité Health Network says the number of tests at each of the centres is limited and that some locations could be out of stock.