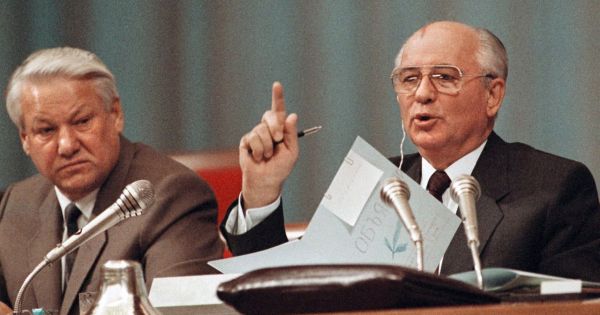 By James Rodgers (*) – The Soviet anthem hailed the socialist union that it celebrated as “indestructible”. Yet 30 years ago this week, the then Russian president, Boris Yeltsin, together with the leaders of Ukraine and Belarus, signed the agreement that created the Commonwealth of Independent States. It was the end for the Union of Soviet Socialist Republics (USSR).

Events unfolded in a deliberately discreet location: a hunting lodge for the Soviet elite tucked away in a forest in Belarus. As historian Vladislav Zubok writes in his new book Collapse: The Fall of the Soviet Union, previous guests had included Cuban president Fidel Castro and the East German communist leader Erich Honecker. By Sunday December 8, he wrote: “Some 160 journalists had arrived, intrigued by the proceedings.”

Their presence was more than appropriate. This was one of those occasions when journalism had truly written the first draft of history. Since the launch of the perestroika reforms in the mid-1980s, Soviet and international correspondents had been allowed unprecedented freedom to write about the USSR. They were not to be denied a front row seat in the audience for this final act.

Perestroika, meaning “reconstruction” was the policy that the Soviet leader, Mikhail Gorbachev, had intended should reinvigorate the moribund Soviet system. Instead it led to its downfall, finally confirmed that cold weekend in late 1991.

Gorbachev had not expected the path ahead to be easy. Still, as Zubok argues, he could have prepared himself better. Instead, as he recounts, Gorbachev “willingly overlooked history lessons apparent to those who had read widely on world and Russian history”. Many conservative elements in the Soviet political elite were wary of change. So along with perestroika came glasnost – meaning “openness” – license for unprecedented public discussion of the problems that beset the Soviet system.

Journalists could cover stories that had previously been taboo. In effect, Gorbachev enlisted them to promote his cause. They willingly took on the role. As journalist and academic Ivan Zassoursky put it in his 2004 book Media and Power in Post-Soviet Russia:“with the sanction of the general secretary, journalists also attacked the party establishment”.

Optimism characterized both the Soviet and international reporting of that period. This was the era of the end of history – in Francis Fukuyama’s phrase – a time when he and many others hailed what they believed they saw coming: “an unabashed victory of economic and political liberalism”.

Even those who might not have shared this great enthusiasm for the triumph of western liberalism remember an era more exciting than any other. “You could practically talk to anybody, fear dissipated, it was an extraordinary time,” remembered Moscow-based Canadian journalist Fred Weir in an interview for my 2020 book: Assignment Moscow: Reporting on Russia from Lenin to Putin.

Weir first arrived in Moscow in 1986, the year after Gorbachev came to power. He came to the Soviet Union as the correspondent for a communist newspaper, The Canadian Tribune. So he was not a natural ally of those who enthusiastically embraced the collapse of Soviet socialism. Still he remembers, “an amazing time”.

The end of communism was the start of my own career reporting international news. I went to Moscow as a producer for the TV news agency Visnews (later Reuters Television). I was just in time to see the world that I had grown up in change forever. The Cold War, in which the rival power blocs of Soviet communism and American capitalism, faced off against each other was ending.

Three decades later, I have been reflecting a lot on the relationship between journalism and history. I have been remembering how quickly those feelings of excitement and optimism in Russia’s relations with the west fizzled out. The consequences of the Soviet collapse are still felt today in the conflict in Ukraine, and the confrontation between the Kremlin and the west that has resulted from that conflict.

Part of that confrontation has arisen from differing interpretations of the second world war. If you have not read it, I recommend the excellent 2020 paper by Andrei Kolesnikov, an expert on Russian domestic politics at the Carnegie Endowment for International Peace on the subject: Our Dark Pat is our Bright Future.

I would argue that we are now in an era when journalists need more than ever to understand the way that history is used to promote political narratives in current events. History influences both contemporary political and journalistic discourse both within the west and between the west and Russia. That’s why we at City, University of London, where I teach in the Department of Journalism are starting a new degree in Journalism, Politics and History.

Think of Black Lives Matter and the discussion it has led to over the legacy of empire and slavery. Or of how both sides in the Brexit debate co-opted Britain’s role in the second world war. Think too of Vladimir Putin’s broadside against the west on the 75th anniversary of the end of that conflict when he warned, in an article for the National Interest: “Historical revisionism, the manifestations of which we now observe in the west, primarily with regard to the subject of the second world war and its outcome, is dangerous.”

Now, 30 years after the end of the Soviet Union, Russia’s relations with the west are worse than at any time since the end of the Cold War. In June 2021 – referring to the current focus of greatest tension between Russia and the west, Ukraine – Putin insisted, that “Russians and Ukrainians were one people, a single whole”. More recently, UK and US foreign policy chiefs have been keen to stress their support for Ukraine’s sovereignty.

Here are two vastly differing interpretations of distant and recent history casting a shadow over current events. Anyone seeking to write the first draft of history, therefore, needs to know history themselves.