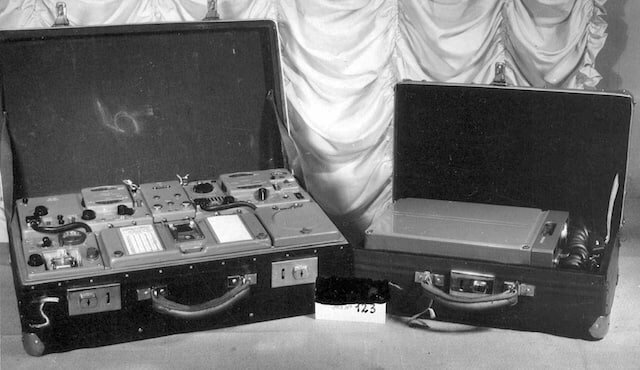 In 1948, the CIA’s Office of Policy Coordination (OPC) selected the émigré organization Ukrainian Supreme Liberation Council (ZP/UHVR) as the “most reliable, best organized and operationally most experienced group for use in exploiting anti-Communist activity of the Ukrainian resistance group then active in Ukraine.”

For the next five years, the CIA and ZP/UHVR conducted extensive joint foreign intelligence operations using the cryptonyms AEACRE and CARTEL and the political and psychological warfare operation AERODYNAMIC: propaganda leaflets and materials were smuggled into Ukraine or dropped by balloons. The CIA infiltrated agents into Ukraine, but most were killed or captured by the Soviet forces.

Then there was Project PBCRUET, on June 17, 1950. The objectives of this project were: “The exploitation and expansion of the Ukrainian resistance movement. To establish a “black” radio transmitter outside (and possibly eventually inside) the USSR for broadcasts to Ukraine.” The immediate objective of PBCRUET was:

To provide the ZPUHVR with sufficient funds, printing presses, and printing paper to assist this organization in carrying on psychological warfare activities directed against the Soviet regime and the Soviet forces of occupation. (Such operations, for instance, would include publication of a Ukrainian newspaper and leaflets, with overt distribution outside Ukraine and covert within.)

The CIA approval request, dated April 30, 1953, ‘Justification for S.R. (Soviet Russia) Division of Athens Radio Facilities for Clandestine Broadcasting to the USSR,’ listed the following as reasons for creating a new radio station:

There are no clandestine psychological warfare assets presently available through which we can reach the audience in these strategic areas. The people in these areas will be receptive targets for black broadcasts. Anti-Soviet nationalism is a potent force in both regions and can be exploited. It was precisely in theme areas that anti-Soviet resistance forces arose during World War II. The population has suffered since the end of the war from the KGB-MVD campaign to eradicate the remnants of these forces. Mass deportations have occurred in these areas since the war and have added to the hatred of the Soviet regime.

The same memorandum listed the aim of the “black” radio broadcasts:

[S]timulate and intensify discontent and disaffection to the Soviet regime and provide the target audiences with hope of ultimate liberation. This will be accomplished through broadcasts in the native language of the target audience, based on factual events and national and cultural history. These broadcasts will stimulate national consciousness among the minority groups addressed and will urge them to maintain pride in the individuality of their various national cultures. Concurrently the proposed broadcasts will encourage passive resistance, warning against premature uprisings but urging organized passive resistance, which can develop into something more active when conditions permit.

The objectives of the clandestine radio project with the cryptonym RANTER were listed in a July 21, 1953 project outline:

The objective of this project is to utilize the broadcast time available on the KUBARK (CIA) radio installation PYREX at Athens, Greece, for the broadcast of a series of programs to be directed to:

The tasks of the project were to:

The presentation of clandestine broadcasts, specifically tailored to the target audience’s needs delivered on a close and friendly basis, will augment the existing inadequate PBPRIME and KUBARK efforts.

The July 1953 project outline also listed the method of preparing the broadcasts:

It is proposed that the S.R. Division be authorized to plan a psychological warfare campaign to be implemented initially over the PYREX radio station located in Athens, Greece.

It is proposed that programs in the Ukrainian language be produced and recorded on magnetic tape in New York and flown to Athens for broadcast by personnel attached to PYREX. It is realized that programming from this distance is not as efficient and timely as it would be if located nearer the transmitter. However, this is the only means where immediate advantage can be taken of the PYREX facility. This project’s program activities will be transferred accordingly when future operation conditions permit the programming to be prepared closer to the transmitter site. At first three tapes a week for fifteen minutes each broadcast time will be prepared. With the increase in script output and availability of air time, the broadcasts can be expanded.

Scripts and tapes were to be prepared by a CIA covert operation in New York City called Prolog Research and Publishing Association, Inc (CIA Cryptonyms QRTENURE and AETENURE) for:

During the fiscal year 1954, the clandestine radio operation had been approved as a sup-project (AERANTER) of Project AERODYNAMIC and necessitated separate funding and CIA administration. It had the primary purpose of furthering “the PP efforts by inauguration of black radio transmissions directed at the Ukrainian SSR.” It would “Share transmitter time with similar type broadcasts presently made from the Athens base station.”

Subproject RANTER had the following advantages:

The project had the following requirements:

The Study Group panel was supervised by one staff employee who was experienced in psychological warfare activities. It had the following duties:

Mykola Lebed, President of Prolog and CIA Principal Agent, (CIA cryptonym AECASSOWARY-2) sent a “Ukrainian Broadcasting Policy Paper” in December 1954 that apparently for the first time mentioned the name “Nova Ukraina” (New Ukraine) for the proposed radio station. An officer of the SR PP Division commented on Lebed’s paper on January 15, 1954, with these comments:

The program is Ukrainian, replete with national symbols and allusions. We especially like the idea of brief features dealing with the gnomic sayings of classical authors well-known in Ukraine and assume that the writer intends to select phrases with political implications. Because of the fact of jamming, a scheme dividing the fifteen-minute program into brief and self-sufficient sections is sound. There would be no point in building the program around long-involved themes, the issue of which would be evident only at the end, just as the jammer might be zeroing in. Brief and self-sufficient items would take advantage of gaps in the jamming and fading of the jamming signals.

The undersigned sees no reason why “New Ukraine”
is not appropriate. It is submitted that we should take maximum advantage of the symbolic impact embodied in a voice that presumably speaks from the Ukraine and in the name and interest of the Ukrainian people themselves by identifying the station as frequently as possible, provided that it is consistent with jamming evasion techniques.