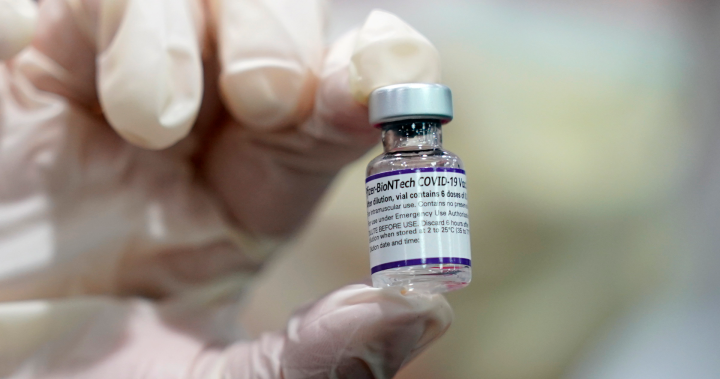 As provinces continue to ramp up booster doses of the COVID-19 vaccine, questions are arising over whether the booster could be considered as part of the full series of vaccines — and necessary for a Canadian to be considered “fully vaccinated.”

The consideration to add a third dose to the “primary series” in mRNA vaccines could potentially cause widespread changes to public health measures — including vaccine admissions to restaurants and other businesses. It also comes amid the spread of a possibly more infectious Omicron COVID-19 variant.

Speculation on whether the primary series could be expanded to three doses of the vaccine comes amid comments from the National Advisory Committee on Immunization (NACI) and Public Health Agency of Canada last Friday.

Asked whether the booster would eventually be considered part of the primary series of vaccines, chief public health officer Dr. Theresa Tam said that the booster dose would only remain “strongly suggested,” but did not discount the possibility for it to be added once more data on the vaccines comes to light.

“So it is a little bit complicated. But the bottom line is that if there is waning immunity over time, then an additional dose or a boost to your immune system helps, at least in the short term, boost your antibody levels and increase the quality of your overall immune response and the durability of the response,” said Tam.

“But I think part of it is because we’re doing clinical trials and observational studies as the pandemic is progressing.”

Tam said that due to time constraints set by the pandemic, researchers still haven’t been able to observe the efficacy of the doses over long periods for the general public, but added that NACI as of now considers additional doses for people with underlying immune conditions as part of the “primary series.”

In a statement sent to Global News Friday, Health Canada said that the government would continue to monitor the available data on booster shots for the general population and to “make additional recommendations, as necessary.”

“The need to administer booster shots to the general population is eventually likely, but not at this time,” read the statement.

Currently, the mRNA vaccines offered by Pfizer and Moderna are to be taken in a series of two jabs in order for a person to receive full protection and vaccination status.

The lab study from Pfizer and BioNTech still showed that a third shot was effective at fighting the variant, though its two-dose series — while still offering protection against serious disease — had dropped significantly to protect against contracting the new strain.

On the other hand, experts like Dr. Gerald Evans, Queen’s University’s chair of infectious diseases, have voiced support for a third dose to be part of the full series, though he was more skeptical on who could make the final decision on what constituted a full series.

“My general belief, my opinion at this point is that this vaccine is probably a three-dose vaccine,” said Evans.

The decision to fully make it a three-dose regimen would ultimately depend on a province and territorial basis, as the administration of health care remained within those jurisdictions, he said.

While Health Canada is the governing body in charge of approving vaccines, NACI could only make recommendations “based on current scientific evidence and expert opinion” — with neither having a say should provinces decide to implement a three-dose series.

“In Canada, provincial and territorial jurisdictions may choose to offer an additional vaccine dose to specific populations to enhance their protection against COVID-19,” read Health Canada’s statement.

“This would be considered off-label use since Health Canada has not authorized a three-dose regimen for any of the vaccines authorized in Canada.”

While none have officially added the booster to the current vaccine series, several provinces have started to aggressively roll out campaigns on booster doses. Most recently, Ontario announced Friday that fully vaccinated people 18 and older would be eligible to get booster shot starting Jan. 4.

According to Evans, having three or even four vaccine doses could still be considered as part of a “typical schedule,” and is common in other shots.

Vaccine schedules such as the ones for human papillomavirus (HPV) and hepatitis B include three doses given at specific intervals.

Do we need booster shots to fight Omicron? Experts divided

Evans said that preliminary research points to the current mRNA vaccines has having to be administered in a three-dose regimen.

“Even our Canadian data, to some degree, is showing a little bit of waning now — it take about eight months or longer for that to happen when you have an eight- to 12-week interval between first and second doses,” he said.

And while Tam and Health Canada’s strong recommendation for people, especially immunocompromised groups, remains, the country’s health agency said that any such “widespread” waning of protection against severe disease in the general population still has not been observed.

On how many vaccines could be added to the series, or boosters for people to take in the future, however, Evans said that we could be looking at bi-annual shots akin to influenza if it was anything beyond four doses.

“I think we’re looking at a three-dose series and then with the potential, you know, with emergence potentially of other variants, especially if they move out an Omicron variant vaccine, then that would be the answer,” he said.

“You might need one more vaccine with the variant, but it would only be one shot at that point, and it would be to cover off an extremely mutated variant like you see with Omicron.”