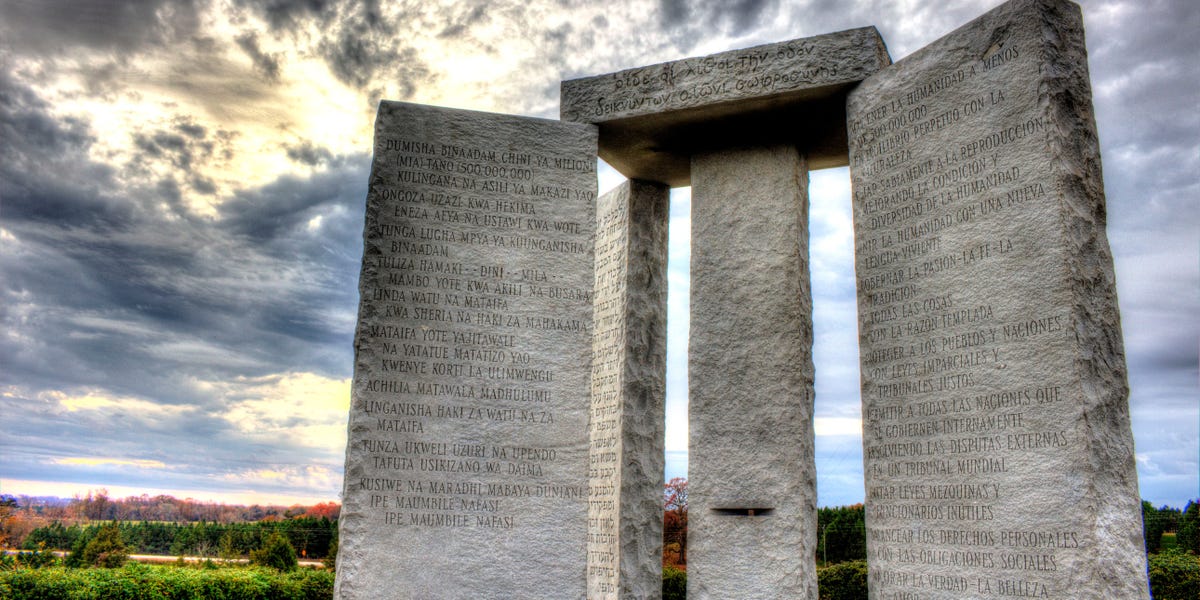 A Georgia monument that was shrouded in mystery was demolished after being partially destroyed in an explosion on Wednesday morning, according to authorities.

The monument, known as the Georgia Guidestones, was erected in 1979 in Elberton County, Georgia. Known as “America’s Stonehenge” for its mysterious origins and prophetic etchings, the structure later became the target of vandals and conspiracy theorists, who believed it had satanic roots.

A preliminary investigation revealed that “unknown individuals detonated an explosive device” around 4 a.m. Wednesday, the Georgia Bureau of Investigation said in a statement.

Surveillance footage posted by the agency on Twitter showed a silver sedan leaving the site shortly after the explosion.

No one was injured, but the rest of the structure was destroyed for safety reasons, the department said.

A video posted by one Twitter user appears to show an excavator knocking down the rest of the slabs.

Who exactly paid for the work and organized its construction remains a mystery, according to Smithsonian Magazine.

One man, Wyatt Martin, claimed in a 2013 interview with The New York Times to know the identity of the individual who commissioned the monument but refused to provide more details.

“I made an oath to that man, and I can’t break that,” he told the newspaper.

The structure is made up of five granite slabs with a capstone laid on top. Engraved into a few of the slabs are inscriptions in eight modern languages and four dead ones, according to Smithsonian.

The Georgia Department of Economic Development describes the inscription as “a 10-part message espousing the conservation of mankind and future generations in 12 languages.” It also serves as an “astronomical calendar,” the department writes.

Some of the messages say to “maintain humanity under 500,000,000 in perpetual balance with nature” and “unite humanity with a living new language.”

These inscriptions have led some conspiracy theorists to believe that the monument is proof of an elite plot to depopulate the world.

Alex Jones, the far-right conspiracy theorist and host of Info Wars, claimed that the structure was a “calling for forced depopulation of the planet” in a video that has since been taken off his website.

As part of her campaign for governor of Georgia, Republican candidate Kandiss Taylor recently promised to “demolish” the Georgia Guidestones which she suggested in a tweet is connected to the “Satanic Regime.”

In her campaign video, Taylor narrates that a “new world order” is here over shots of the slab’s inscriptions.

She later tweeted on Wednesday that “God is God all by Himself. He can do ANYTHING He wants to do. That includes striking down Satanic Guidestones.”

The monument was also previously vandalized several times. In one case, vandals spray-painted the stones with messages like “Jesus will beat u satanist,” according to Wired magazine.

Not everyone may be celebrating the destruction of the monument, which has also been called America’s Stonehenge.

In an interview with The Times, Matt Clamp, a local businessman who helped his father engrave the stones, said he was “heartbroken” by the destruction and hopes that it can be rebuilt if allowed.

“People were always coming up with some kind of crazy whackadoodle story about them,” he said in the interview.