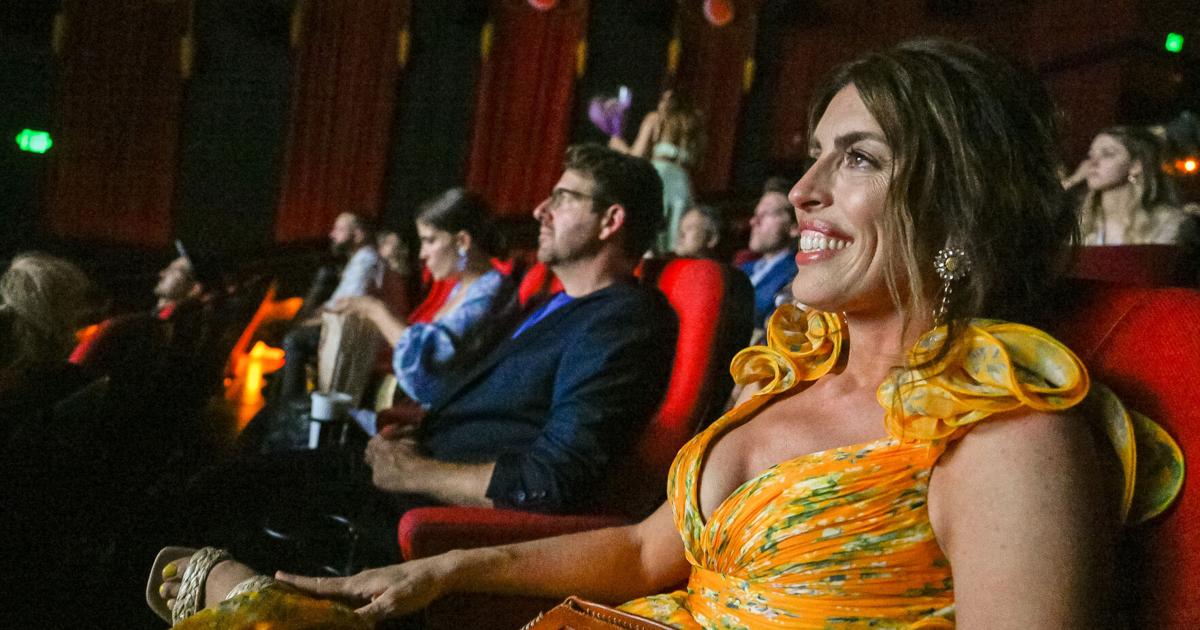 Earlier this summer, the Baton Rouge filmmaker and her hometown entourage took their seats at LA’s famed TCL Chinese Theatre (formerly Mann’s) with an audience of 80 to watch the premiere of Hogan’s labor of love, “Days of Daisy.”

Wearing a full-length gold gown with a muted floral print, sparkling earrings and hair upswept, Hogan and husband, executive producer Aaron Hogan, walked a green rather than red carpet for their Dancing with Films festival debut.

“A lot of people from Louisiana who were involved with the movie were there just to see the movie on the big screen, which was so cool,” she said.

Dancing with Films, a second-tier festival, seemed to Hogan to be an optimal outlet to seek exposure and distribution opportunities for “Days of Daisy,” a comedy about a school librarian (played by Hogan) questioning her life as her possible child-bearing years dwindle and 40 stares her in the face.

“I had heard about it but didn’t know if we could get in, so when we got in, I knew it was a perfect premiere for us,” Hogan said. “It’s really neat, it’s in the Chinese Mann Theatre, just quite the glamorous experience.”

It was the first Hollywood premiere for the producer/actress, as well as for many involved in the mostly Baton Rouge-shot project.

The actress herself spent eight years living and working in Los Angeles in her 20s, but it was when she moved back home that she found more acting opportunities.

“That’s when I got ‘Dallas Buyers Club,’ ‘Inside Out’ with Bruce Dern, a recurring role on ‘Claws’ and a guest-star on ‘Scream Queens.'”

For “Daisy,” Hogan was able to cast several of her Love Acting studio students.

“Maddie Nichols, who is making a big splash in Hollywood right now, she is the lead kid in the movie,” she said.

Credits for Nichols, 22, of Denham Springs, include this year’s Bruce Willis-starring action-thriller “Vendetta,” a starring role in Lifetime’s “A Murder to Remember” and guest-starring spots on TV’s “The Outsider,” “Hawaii Five-O” and “The Resident,” among others.

“Toby Nichols is also doing quite well,” she said. “They’re not related, but they play opposite each other in the movie. They bring some weight to the movie, because they’re actually in some great movies themselves.”

Toby Nichols, 20, grew up in St. Francisville and has acted in this year’s feature “Where the Crawdads Sing,” 2015’s “Trumbo” and TV’s “Amazing Stories” in 2020, along with numerous other film and TV roles.

Other students Hogan said she’s taught since they were ages 10 and 11 filled out “Daisy’s” high school age actors.

“Those kids have been like our kids. We’ve been making films with them and teaching them, and he (Aaron Hogan) teaches photography (and runs Eye Wander Photo), so it’s an unconventional kind of parenting,” she said. “We’re mothering and fathering the community in a way.”

Finding a “Jack” to star opposite Hogan’s character required a wider search, however.

“This movie is very personal, so we were looking for someone who looked like or acted like Aaron a little bit,” she explained. “And we were on the hunt, we couldn’t find anybody so we ended up doing a casting call in LA for the lead male actor and he (Bryan Langlitz) actually does resemble my husband quite well.”

So how similar are the Hogans’ lives to the Daisy and Jack characters?

“We say loosely based, because I’m not a librarian, but that was kind of like a Hollywood move to create this drama around her life,” she said. “But, yes, basically you know how they say write what you know — this is one of those things.

“I knew with my first feature I wanted it to be very personal, and my husband and I had gone through this ourselves, where we had made this decision not to have children when we first got married, and as I was getting closer to 40 (she’s 43 now) I was feeling really kind of heartsick about not having kids. And so they say turn your pain into art and so I decided to tackle that and see what came of it, so we made a short film.”

Hogan thinks a lot of her friends share similar feelings.

“Like, oops, all of a sudden I’m too old. How did that happen? It’s a very sensitive topic, but we took it and created this light-hearted, kind of encouraging and inspiring type story that wouldn’t leave you with a bad taste in your mouth about it. It was actually funny and quirky and offbeat,” she said.

Due to Canadian-born director Alexander Jeffery’s schedule, the film’s ending was shot in Shreveport.

“We had access to his (Jeffery’s) house to finish the movie, that little house at the very end,” Hogan said. “We needed a cute little house and we only had two or three scenes left.”

The Hogans had previous worked with Jeffery on various Louisiana Film Prize projects. That film festival is based in Shreveport.

“Jency and I have been working together for many years; we call each other film brother and sister,” Jeffery said. “Working with her on ‘Days of Daisy’ was a blast. I loved seeing her create this opportunity for herself and her friends, and I was proud to help shape that experience in some way.”

“We brought a lot of people from Film Prize (to ‘Daisy’), a filmmaking crew to write it and edit it and act in it — people I’ve seen in the Film Prize for many years,” Hogan said.

Back in Baton Rouge, she classified “Days of Daisy” a very mom-and-pop project, specifically supported by her parents, longtime Baton Rouge residents Don and Kate Griffin.

“Mom worked on background sets with the art team, worked on props, brought food to the set, housed people during the movie’s filming,” she said. “I think the whole community rallied around the movie.”

And that included Nicole Calle’s students at The Dunham School, who made artwork for an exhibit depicted in the film; and LSU adjunct professor Carrie Brantley Wimberley and her colleague, Jerome Ford, who created a large sculpture also seen in the movie.

Support from the Louisiana Film Commission and securing film tax credits as a Louisiana filmmaker, couple with the chance to film at home was a win-win for Hogan and her team.

“I really want to continue to make movies that give the Louisiana community a lot of opportunity — young filmmakers, young actors, people that need experience,” she said. “That’s kind of my dream, right, is to help launch people’s careers right out of Baton Rouge and create a hub for filmmaking right here. I think it’s possible to use the great Louisiana talent and create great movies.”