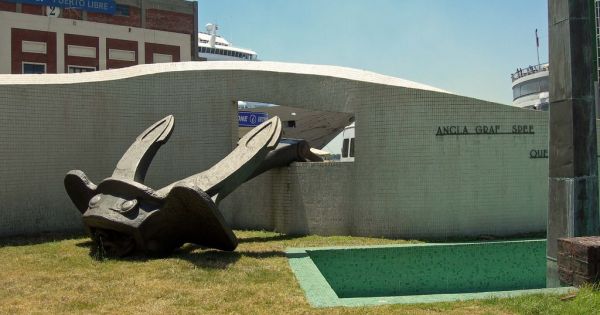 The 7-ton anchor which once belonged to the Reichsmarine’s Panzerschiff Admiral Graf Spee sank off the coast of Montevideo in December 1939, marking the end to the Battle of the River Plate against British Commonwealth forces at the beginning of World War II, has been ferried by lorry to Punta del Este to be a part of the Memorial site to be opened before the end of the year.

It was the only WWII event in these parts of the world. The heavily armored German boat had left the port of Wilhemshaven in August 1939 to act as a privateer in the South Atlantic with orders to sink British merchant ships.

After being ambushed by the fleet headed by Commodore Henry Harwood, the Graf Spee engaged in combat with three British units (technically the Achilles belonged to the Royal New Zealand Navy), after which Captain Hans Langsdorff decided to dock in Montevideo on Dec. 13 for repairs and also to bury his dead and treat his wounded.

Langsdorff was given just 72 hours by Uruguayan authorities to leave or face internment, which meant the high-tech piece of warfare would have changed flags to that of Uruguay. After making arrangements with the Government of Argentina to welcome the members of his crew who had not been allowed to go ashore in Montevideo for not being wounded, Langsdorff blew up his own ship Dec. 17 and eventually committed suicide in Buenos Aires.

The Graf Spee’s wreckage has for decades been an attraction off the coast of Montevideo when downspouts made it visible.

In 2006 the Graf Spee’s , bronze eagle with the Nazi swastika underneath was resurfaced thus triggering a series of controversies with international repercussions as it is feared to become a cult fetish of neo-Nazi movements.