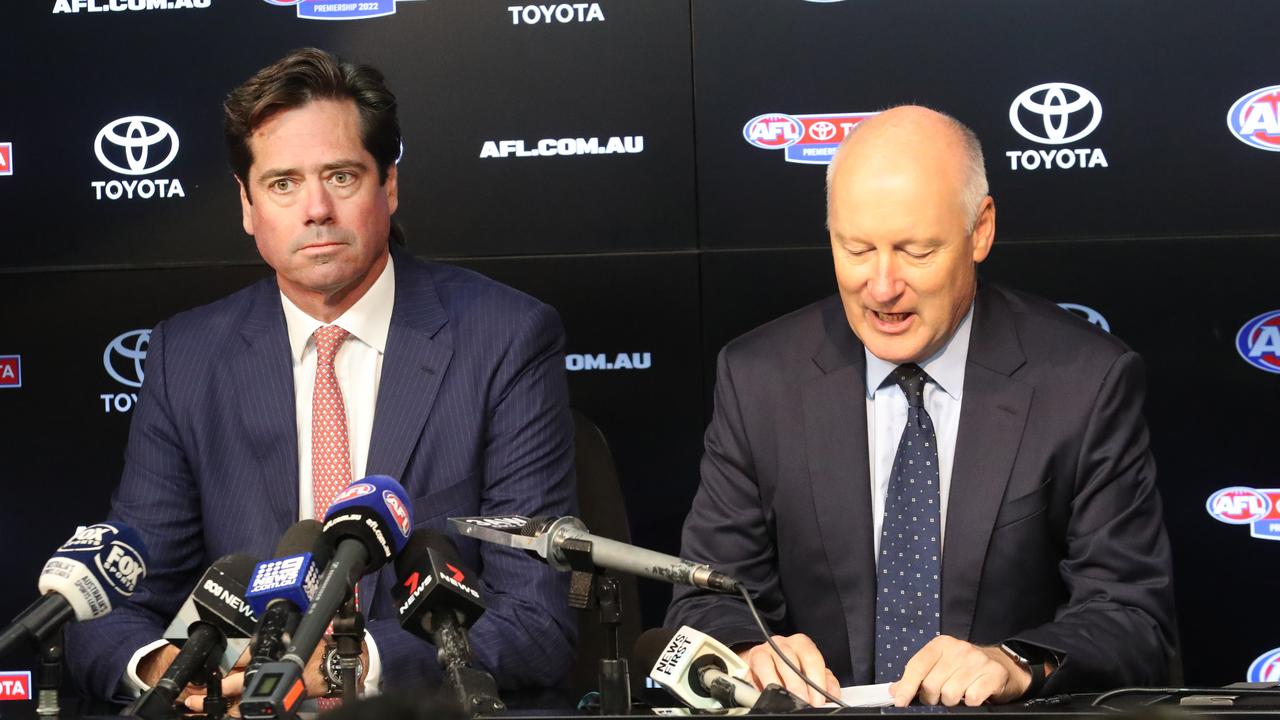 AFL boss Gillon McLachlan says the league will not be releasing the bombshell report detailing allegations of mistreatment of Indigenous players at the Hawthorn Football Club.

The shocking report, commissioned by the Hawks, was given to the AFL integrity department two weeks ago, the league has confirmed.

McLachlan was an hour late in fronting the press for a scheduled media opportunity on Wednesday morning as the league continues to reel from the allegations.

The outgoing boss said the league is now establishing a four-person independent panel to further investigate the allegations included in the report.

He said the make up of the panel will include a King’s Counsel and will represent people of a culturally diverse background.

Among the revelations included in McLachlan’s press conference, it was suggested the immediate futures of North Melbourne coach Alastair Clarkson and Brisbane Lions coach Chris Fagan will be announced later on Wednesday.

McLachlan said the report and a follow-up investigation from ABC Sport was a “challenging, harrowing and disturbing read”.

He said the wellbeing of the women and players mentioned in the report were the league’s top priority.

Football commentators on Wednesday morning reacted with widespread calls for former Hawthorn coach Clarkson to stand aside following the release of a bombshell report surrounding allegations of shocking mistreatment of Indigenous players.

The external review alleges four-time premiership coach Clarkson and former assistant Chris Fagan, who is now the coach of the Brisbane Lions, were involved in some of the cases.

Football journalist Jay Clark told Triple M on Wednesday the report was commissioned as a result of complaints previously made by former Hawks star Cyril Rioli before he left the club and retired prematurely in 2018.

The report that came to light on Wednesday now alleges senior staff at Hawthorn demanded the separation of First Nations players from their partners and pressured one player and his partner to terminate a pregnancy for the sake of his career.

Other players allege they were made to remove SIM cards from their phones and replace them with new ones in an attempt to cut them off from their partners and make them focus on their football careers.

Names have been changed in the report to protect the identities of the players and their partners.

The most troubling allegation centres around one case mentioned in the report which details how one player claims Clarkson and Fagan were present at a meeting where he was told to get rid of his partner and unborn baby — and then move to live with a member of the club’s staff.

“Clarkson just leaned over me and demanded that I needed to get rid of my unborn child and my partner,” the player says.

The player went on to say: “He told me to kill my unborn kid.”

Former Hawthorn captain Luke Hodge has been left deeply “shocked” and “uncomfortable” by the allegations of “disturbing historical allegations”.

He told SEN radio on Wednesday: “What we went through as a group, we had a lot of success over the years, but at this stage, that’s irrelevant because what young blokes were told or put through.

“When you get drafted to a football club, it is supposed to be an exciting time … it should be that ‘my life has changed, I now have a pathway for the next 10 years hopefully’. But that’s not what happened with these young kids.

The AFL Players’ Association is extremely concerned about the details of the report relating to player and partner experiences while at the Hawthorn Football Club.

We have spoken to the AFL and communicated our expectations that an independent investigation must be conducted. It should also be well-resourced and wide-ranging in scope.

In the meantime, the affected players and partners will continue to have the full support of the AFLPA through our various programs and services. These services will also be reinforced to all members of the AFLPA.

“Clearly there’s so much more that needs to be done. It just should never have gotten to a level like this,” he said.

“You put so much trust in people in a football club when you get to it that they’re going to help you and put you on a path that is supported and you can fulfil your dream, it isn’t something you finish up with having had a terrible experience and quite clearly this is that.

“There’s a lot of work to get to to get to the bottom of that in my view and first and foremost I think people should look to those who have been directly impacted by this and that is the players and their partners.”

Hawthorn responded to the allegations on Wednesday morning.

In a statement, the football club said: “Earlier this year the Hawthorn Football Club engaged external First Nations consultants to liaise with current and former First Nations players and staff to learn more about their experience at the club.

“This important work has raised disturbing historical allegations that require further investigation. Upon learning of these allegations, the club immediately engaged AFL Integrity as is appropriate.

“The club will continue to provide support to those who have participated in this process, and their wellbeing remains our priority.

“While the process indicated the current environment at the club is culturally safe, it also recommended that some of the club’s current First Nations training and development programs should continue to be strengthened.

“The club places the best interests and welfare of our players and staff as our number one priority.

“Given the matters raised are confidential, the club will not provide any further comment at this time.”

“The AFL is committed to providing a safe, welcoming and culturally appropriate environment for all players and staff throughout the industry, ensuring that physical, mental and emotional welfare is a key priority for all in our sport,” it said.

“The AFL takes extremely seriously all matters where people report experiencing harm, discrimination or mistreatment in our industry. We recently received a document from the Hawthorn Football Club outlining very serious allegations gathered during the recently completed review by an external consultant who interviewed current and former Aboriginal and Torres Strait Islander players

“The experiences outlined in the document are extremely serious and require further and full examination.

“The AFL is finalising a process to investigate the allegations and has sought further details of those who shared their experiences in order to progress its investigation.

“The AFL is committed to ensuring all who shared their experiences are fully supported through this process. The AFL will liaise with the parties to ensure appropriate support and cultural safety are in place in accordance with the wishes of those involved.

“We are committed to the welfare of all involved. Once we have spoken to those who have shared their experiences, we will be able to provide an update on the next steps in the investigation.”