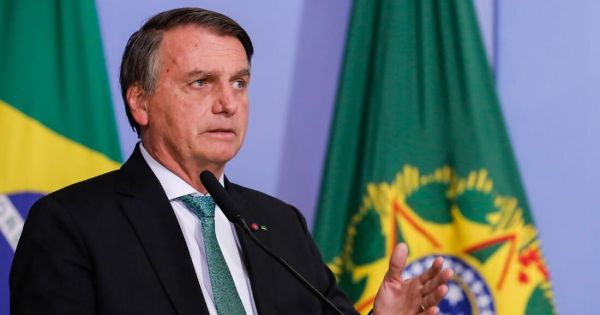 Increase in fuel price, a crime against Brazilians, says Bolsonaro

Brazil’s oil company Petrobras came under heavy criticism Wednesday from President Jair Bolsonaro, who claimed the decision to raise the price of fuel at pumps was both absurd and a crime against the population.

Petrobras committed this crime against the population, this absurd increase in the price of fuel, Bolsonaro said in a TV interview, thus deepening his feud with Petrobras CEO Joaquim Silva e Luna.

A 24.9% increase in the price of diesel in addition to other adjustments in gasoline and gas for family consumption was announced last week after the oil barrel surpassed US$130 due to the Ukraine war.

Bolsonaro admitted he had tried to persuade Petrobras to postpone the increments at least until Congress passed a reduction to a tax on the circulation of goods, with which he seeks to lessen the impact of the diesel hike. Fuel is expensive all over the world, it could be a little bit cheaper here, he pointed out. Whatever I can do, I do, Bolsonaro also told a group of supporters at his official residence in Brasília.

Petrobras is a state-owned company with open capital, with shares listed on the New York and São Paulo stock exchanges, whose head is appointed by the President of the Republic.

The retired General Luna e Silva said he would not resign from the position he has held for less than a year. I have military training, one dies in battle and does not leave the troops alone, he told GloboNews. My appointment is from the President of the Republic, with whom I have a relationship of loyalty and trust, said the oil company chief, acknowledging that his continuity ultimately depends on the will of the Planalto Palace.

Vice President Hamilton Mourão, also a retired general, has supported Silva e Luna, saying he had the strength of character to resist pressures to change his pricing policy. We have to understand that the price of fuel will not return to the levels we would like, we will never again pay 4 reais per liter of gasoline, it will be difficult for that to happen, said Mourão, who also spoke of a lot of hysteria stemming from the conflict between Russia and Ukraine.

While Bolsonaro has praised Russian President Vladimir Putin and expressed neutrality between Moscow and Kyiv, Mourão has been in favor of armed action by the West in defense of Ukraine.

Members of the military wing of the government, informally represented by Mourão, support the continuity of Silva e Luna against Bolsonaro and the political wing, which is rather concerned about the negative impact of the price increase in view of the upcoming October elections.

According to Folha de São Paulo, if Silva e Luna falls, his position would remain in the hands of someone linked to Minister Ciro Nogueira, head of the Civil House, and main representative of the group of pro-government parties known as Centrão.