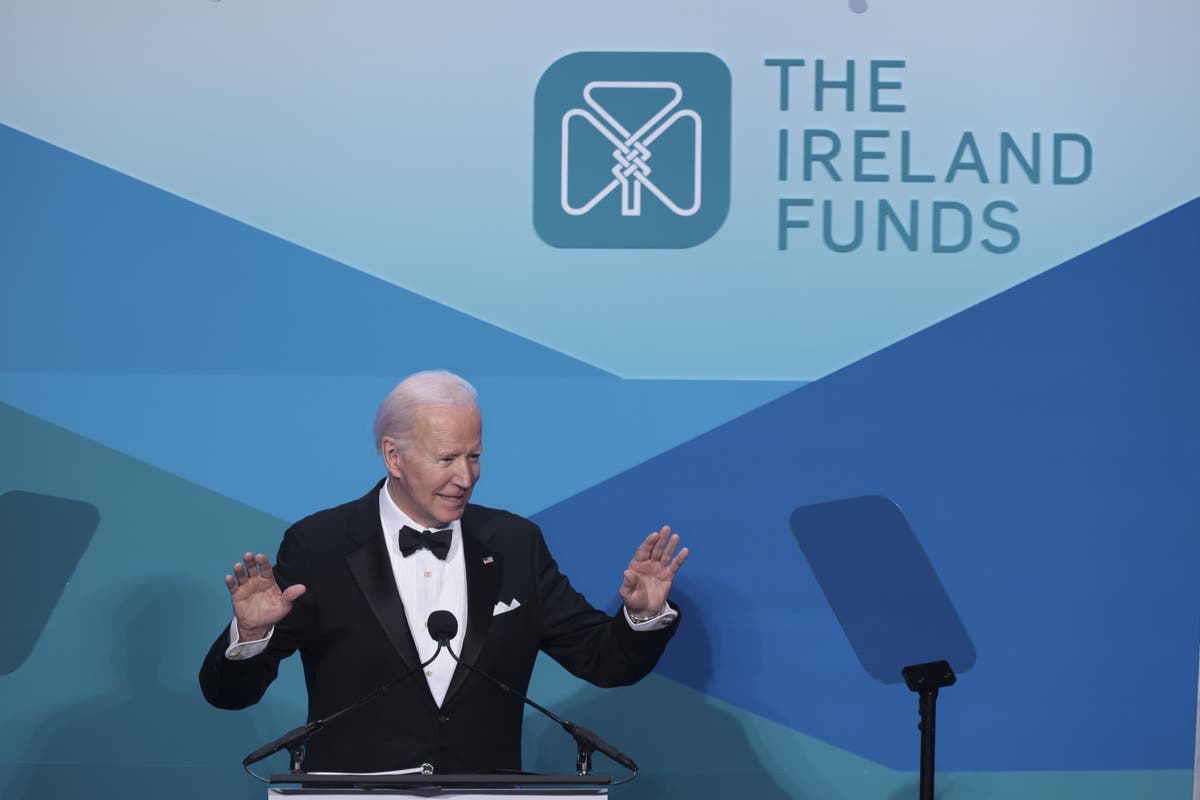 The US President has said the world should remember how Ireland “stepped up” to respond to the war in Ukraine.

Joe Biden, who has always taken pride in his Irish roots, hailed the country’s efforts to help defend the war-torn country from Russian aggression.

“Everybody talks about Germany having stepped up and changed,” he said, in reference to that country’s abrupt about-turn on defence spending in the wake of the attack on Ukraine.

“A neutral country. Ireland has stepped up and taken a hit for it.”

The Republic of Ireland, a member of the UN Security Council and an EU member state, has already taken in more than 7,0000 refugees from Ukraine while also taking part in imposing sanctions on Russia.

Political leaders in the country have stressed in recent weeks that while the Republic is militarily neutral, it is not politically neutral.

The US President was speaking during an appearance at the traditional St Patrick’s Day Friends of Ireland luncheon in Washington.

Celebrations had been dampened slightly by the revelation, late on Wednesday, that Taoiseach Micheal Martin had tested positive for Covid-19.

Earlier, the Irish and American leaders had held a virtual bi-lateral meeting for the second year in a row and Mr Biden hailed the Irish leadership for its handling of the Ukrainian crisis.

The US President noted the absence of Mr Martin, but said he was “looking well, he is feeling well”.

“He is really sorry he can’t be here. He was really looking forward to it, as was his wife.”

“Today, I think we can add a fifth item at least to my unity agenda – support of our relationship between Ireland and the United States.”

He also took a moment to praise the bipartisan nature of the gathering.

“We should have more times like this, when Democrats and Republicans get together,” he told the room, to applause.

“Remind ourselves we actually like each other, that’s a useful thing.”

For Mr Biden, the celebration of Ireland’s patron saint in Washington took on a distinctly personal hue.

The luncheon began with an introduction from the speaker of the House of Representatives, Democrat Nancy Pelosi.

“We are especially grateful to be celebrating the feast of St Patrick with an Irish-American president,” she told the room.

She spoke passionately about how Irish and American people have united in the name of “peace”.

Referencing the Good Friday Agreement, she spoke about visiting the border in Northern Ireland in the 1990s, adding that it has been transformed today and during her last visit she saw “a completely different thing at the border. Just a yellow line turning into a white line”.

But her kindest words were for Mr Biden, whose Irish immigrant heritage, Ms Pelosi said, had imbued him with a special appreciation of American diversity.

“We could see how this great president came to be, as a person who understands the beautiful diversity of this country.”

“He understands the dignity and worth of all people, because his Irish heritage in his case was accompanied by a deep Catholic faith.”

Joe Biden himself spoke about the values of immigrants into the US, referencing his own family’s journey from Ireland to America.

“It is all about striving for a better future.

“You can do it while you cherish the past. You don’t have to forget the past or disassociate yourself from it.

“There is an indelible part of it that is American, because the values are the same.”

Not for the first time, Mr Biden also re-affirmed his commitment to peace in Northern Ireland.

He referenced his relationship with Prime Minister Boris Johnson and said: “The Good Friday Agreements are firmly, firmly, firmly supported in the United States.

Amid applause, Mr Biden said: “The people of Northern Ireland have made significant changes as well.”

But in the context of Ukraine, he said the Republic of Ireland and the UK were “standing together against a murderous dictator”.