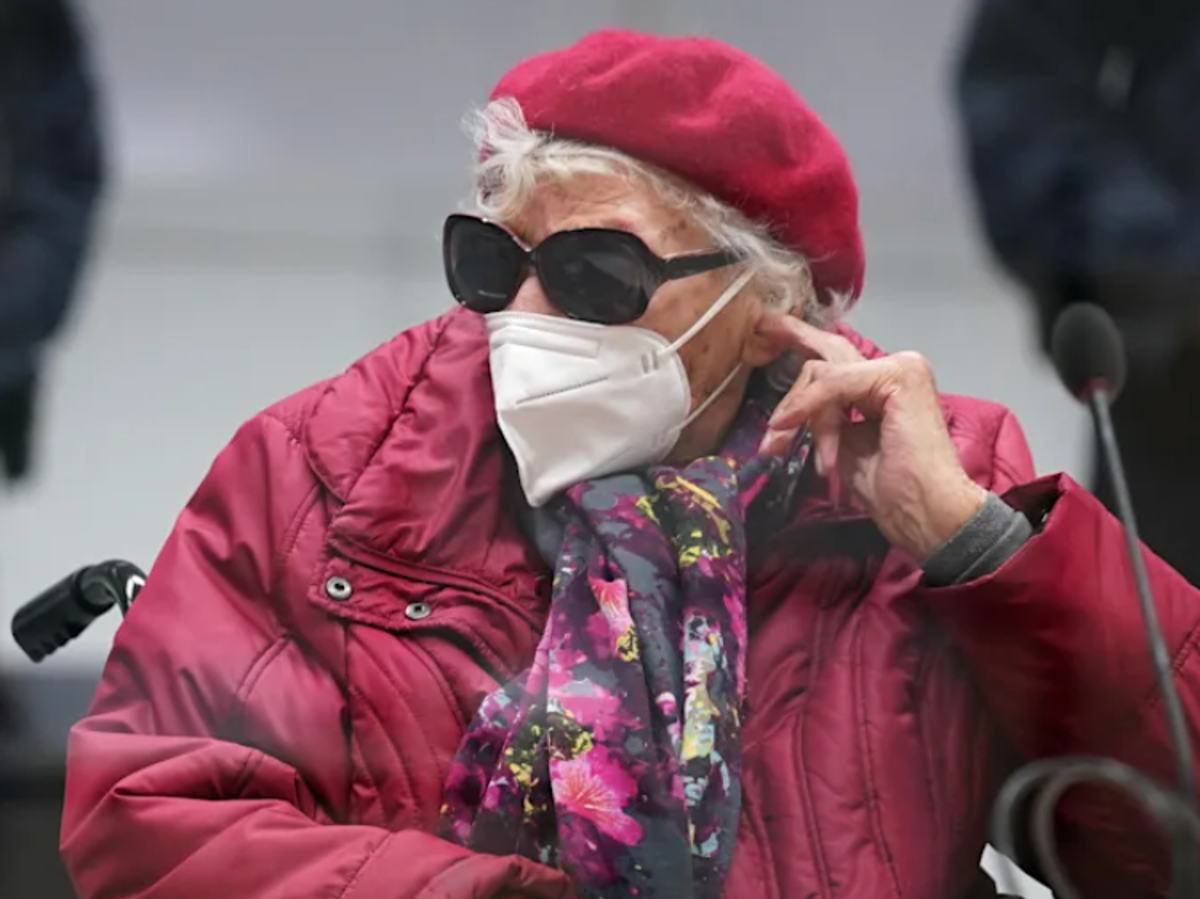 Irmgard Furchner, the 96-year-old woman currently on trial in Germany for alleged Nazi war crimes committed during the Second World War, made headlines around the world on 30 September when she attempted to flee justice despite her advanced years and frail condition.

Subsequently recaptured and appearing before a court on the outskirts of Itzehoe, Schleswig-Holstein, on 19 and 26 October, Ms Furchner is accused of contributing to the murder of more than 11,412 people through her work at the Stutthof concentration camp between 1943 and 1945.

Despite her advanced years, the defendant is being tried in an adolescent court as she was still a teenager of 18 when she began work at Stutthof, a camp near Gdansk in what was then Nazi-occupied Poland and the first to be built on foreign soil.

Ms Furchner – who was born Irmgard Dirksen on 19 May 1925 – worked as a secretary, stenographer and typist to SS commandant Paul Werner Hoppe and would have had a hand in transport lists of detainees due to be sent to Auschwitz for execution, the dictation of Hoppe’s orders, radio messages and his correspondence, according to the prosecution.

But her attorney, Wolf Molkentin, insists she was not aware of the true nature of what went on at Stutthof during her employment there.

“My client worked in the midst of SS men who were experienced in violence – however, does that mean she shared their state of knowledge? That is not necessarily obvious,” he has said.

Her former boss, Commandant Hoppe, was convicted for his role at the camp and sentenced to nine years in prison by a West German court in 1957. He died in 1974.

An estimated 65,000 people died in the gas chamber or of starvation, dehydration and prevalent diseases like typhus at his notorious prison on the Baltic coast between 2 September 1939 and 9 May 1945 when it was finally liberated by the Allies.

Ms Furchner – who appeared in court in a wheelchair in the wake of her dramatic escape attempt, which saw her apprehended in Hamburg after a few hours on the run from her care home in Quickborn – is said by her attorneys to have rejected any suggestion of personal guilt and is refusing to comment.

“Irmgard Furchner does not deny the crimes of the Shoah,” Mr Molkentin told the court. “Neither does she deny the terrible acts that took place as has once again been made clear to us all in the indictment. She simply rejects the charge around which this trial ultimately revolves, that she was personally guilty of a crime.”

He said the proceedings against her were “unreasonable” given her advanced age, because of which hearings have been limited to two hours a day.

Unmoved, prosecutor Maxi Wantzen said the defendant’s clerical work at Stutthof had “assured the smooth running of the camp” and gave her “knowledge of all occurrences and events at Stutthof,” including the mass killings of its captives.

The court heard the suffering of victims sent to the camp’s gas chambers, including cries and jostling at its bolted doors, would have been “clearly audible” to all in the vicinity and that there was simply no way Ms Furchner could have remained oblivious to what was taking place there.

“A visual inspection of the Stutthof by the trial participants would allow them to see that the defendant would have – both on her daily route to work and from her view from the building of the commander, where she had her office… had to observe the existence of a gas chamber, a crematorium, a gallows and the omnipresent daily inhumane treatment of the detainees… both acoustically and visually,” said lawyer Christoph Rueckel.

Irmgard Furchner, who was first interviewed about her past in February 2017 and has since been dubbed the “secretary of evil” by the tabloids, is the latest nonagenarian to be charged with crimes connected to the Nazis.

The prosecution is being seen by some as a rush to seize the final opportunity to ensure that at least a degree of justice is served on behalf of victims of the Holocaust, one of the worst mass killings in human history.

However, the threat of neo-Nazi agitators arriving outside the court to cheer a woman some have reverred online as the “rebel from Itzehoe” reveals precisely why prosecuting the wrongs of the past remains so vital, as Dr Efrain Zuroff from the Simon Wiesenthal Center has said.