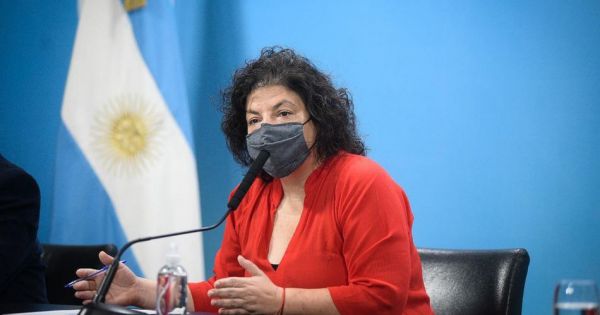 Argentine Health Minister Carla Vizzotti Wednesday announced people who have taken a full COVID-19 vaccination treatment will be forced to spend five days in isolation after being in close contact with a positive case of SARS-CoV-2, while the 10-day quarantine will remain in force for the unvaccinated.

Vizzotti explained the new measures after a meeting of Cofesa, the council brining together health ministers of all districts plus the one from the federal government.

All 25 Cofesa members (23 provinces plus the Autonomous City of Buenos Aires and the national government) agreed on easing the isolation requirement for those fully vaccinated with two doses or with one dose of the brands developed under that scheme.

Meanwhile, people who test positive for COVID-19 will need to spend 7 days in isolation if they are fully vaccinaated or 10 days if they have received no vaccine or just the first shot.

Asymptomatic people who have been a close contact of a positive case: 5 days if fully immunized, 10 days if unvaccinated, in addition to a PCR test.

Argentina is starting its third wave, Vizzotti explained. We delayed the arrival of Delta so much that we have avoided a wave, she said.

Cofesa members also discussed the use of home testing kits. Work is in progress, ANMAT is evaluating the presentations from the laboratories, but without a doubt Argentina is qualified to use these tests, Vizzotti admitted.

According to data from the the Health Ministry, the less restrictive measures on vaccinated citizens met scientific criteria. The new rtrend is a world affected by isolations and not by closures, Vizzotti also popinted out.

At this new stage, the Health Ministry is less interested in the number of cases than it is in the number of hospitalizations, particularly in ICUs, with a special focus on the beds available and the number of deaths. There were 892 COVID-19 patients nationwide, while the total occupancy of beds in adult ICUs was 34.4% nationwide and 36.4% in the Metropolitan Area of Buenos Aires (AMBA).

Measures may vary from one province to another. Córdoba had reduced the number of days in isolation way ahead of others.

The Health Ministry reported 33,902 new infections Tuesday, the highest number since last June 2, in addition to 20 deaths for a total of 5,514,207 fatalities since the onset of the crisis.

This test would have an interesting role in this context of a transmissible variant and few symptoms, such as minimizing the possibility of outbreaks, explained the official.

Local laboratories Abbot, Roche, and Becton Dickinson as well as a Korean firm presented have filed before the Surveillance Agency ANMAT for clearance to import self-testing COVID-19 kits. The green light is due next week.

A Health Ministry senior source quoted by TN said these tests will be available at the patient’s expense. But they need to be handled at pharmacies so that authorities can know who has tested positive. Another option is that if a person tests positive for COVID-19, they will have to go to an official position so that their case is uploaded in the Ministry’s digital system.

The health ministers also agreed a number of people aged 18 to 40 were not showing up for their second doses, which was tantamount to 2 million people. Hence, the Government set in place the health pass requirement to attend public offices and large scale events.