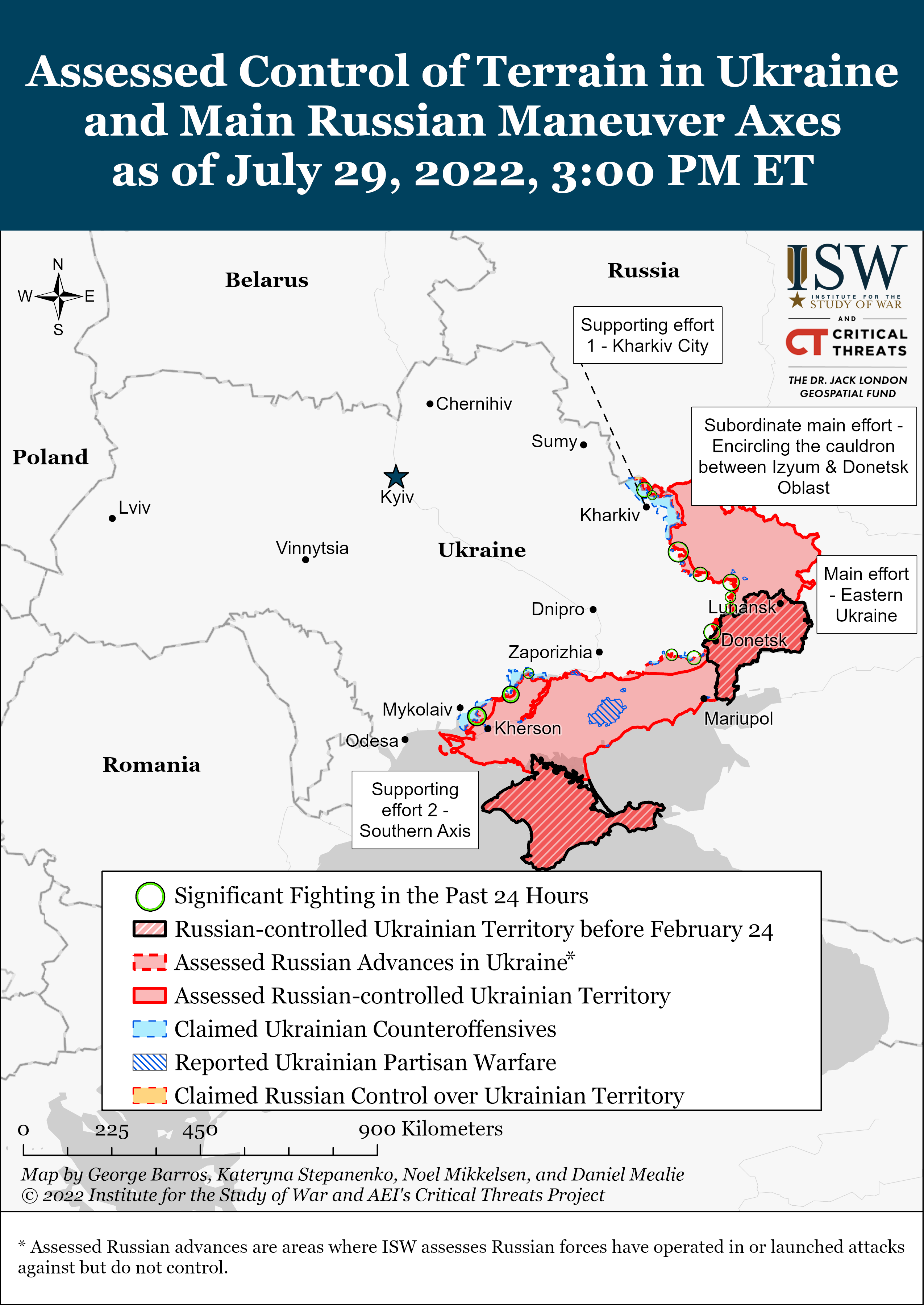 Ukraine and Russia are blaming each other for the attack and available visual evidence appears to support the Ukrainian claim more than the Russian, but ISW cannot independently assess the nature of the attack or the party responsible for it at this time. The Russian Defense Ministry asserted that Ukrainian forces deliberately struck the Olenivka pre-trial detention center holding Ukrainian POWs including Azov Regiment servicemen using Western-provided HIMARS, killing at least 40 and wounding 75 POWs.

Kremlin-sponsored news outlet “RIA Novosti” published videos of the detention center, which showed fire damage but not the sort of damage that a HIMARS strike would likely have caused. RIA Novosti also released footage of HIMARS missile fragments but provided no evidence that the fragments were recovered at Olenivka. Luhansk People’s Republic (LNR) Ambassador to Russia Leonid Miroshnik claimed that Ukrainian forces struck the pre-detention center to eliminate the evidence of Ukrainian surrenders and prevent POWs from speaking out against the Ukrainian government.

The Ukrainian General Staff also noted that Ukrainian analysis of the damage to the building, intercepted phone conversations between Russian servicemen, the lack of reported shelling in Olenivka, and the absence of casualties among Russian personnel serving at the penal colony all point to a Russian deliberate “terrorist act” as the cause of the incident. The Ukrainian Main Military Intelligence Directorate (GUR) accused Wagner Group head Yevgeny Prigozhin of ordering the “terrorist act” without consulting with the Russian Defense Ministry, to conceal the embezzlement of funds allocated for the maintenance of Ukrainian POWs before an official inspection on September 1.

The Ukrainian Office of the General Prosecutor reported that the explosion killed at least 40 and wounded 130 Ukrainian POWs.

ISW is unable to assess the nature of the event or the party responsible for it with any confidence at this time. We will update our assessment as more information becomes available.