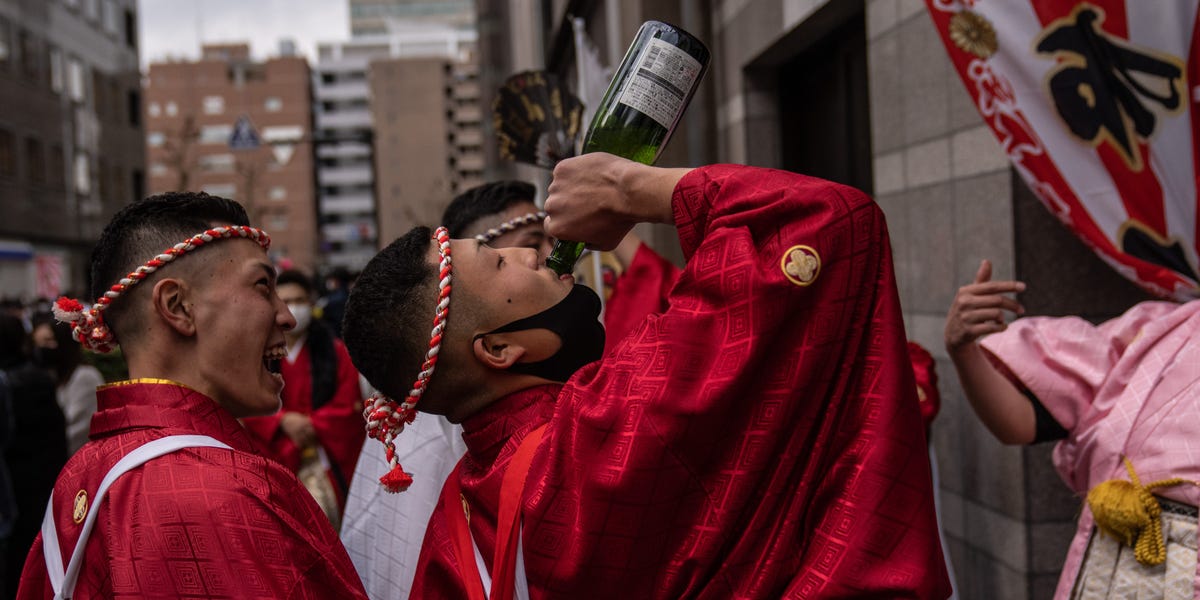 Japan’s recent campaign urging people to drink up has sparked an outcry online, with citizens criticizing it as a short-sighted plan that encourages unhealthy habits for the sake of a bump in alcohol taxes.

The “Sake Viva!” campaign, run by Japan’s National Tax Agency, is holding an open competition for young people to submit ideas on how to boost the sales of alcohol consumption — and thereby liquor tax revenues.

It’s aimed at reviving the country’s alcohol industry, which has suffered because of the country’s aging population and lifestyle changes from the COVID-19 pandemic, its website said.

But so far, the campaign isn’t off to a great start. As of Friday evening Tokyo time, the hashtag #SakeViva had been populated by dozens of posts, many of them in Japanese, bashing the campaign.

“Staying away from alcohol is a good thing. Do you want to go that far to take the liquor tax?” one user tweeted.

“Even if tax revenues rise a little, our medical expenses will explode,” wrote Mikiko Kaneko, a freelance writer who goes by the Twitter handle @fukuuchi_ayano.

Kaneko, a 48-year-old freelance writer in Niigata city, told Insider she previously struggled with alcoholism but quit drinking for a second time in February. She said she started drinking heavily when she was younger partially because alcohol is often framed positively in Japan. She bashed the practice as “cultural brainwashing.”

“In Japan, commercials for sake are usually played and you can buy alcohol freely at any time, so most people actually don’t think of alcohol as a bad thing,” she said.

“I think Sake Viva has made it clear that Japan is far behind in terms of awareness of alcohol among developed countries,” she said.

Kazuma, another Japanese citizen who voiced his concern online, told Insider sake is especially popular among his peers because it’s cheap. A 16-ounce can of sake containing 9% alcohol will retail in Japan for about $1.35, said the 28-year-old radiographer, who uses the handle @yanabuchiyanabu.

“I think it’s impossible to justify the campaign,” the Kyushu resident said. “If alcohol tax sales have declined, then the state should revise the tax rate and tax those who consume more alcohol to prevent alcohol dependence. I think this campaign will create a lot of diseases.”

Manabu Ozawa, a basic medical sciences professor at a national university in Tokyo in his mid-40s, said it was “unbelievable” that a national government agency would spend money to promote something detrimental to its citizens’ health.

“You can imagine how stupid it would be if the National Tax Agency were to launch a campaign to encourage young people to smoke cigarettes because cigarette tax revenues have fallen,” he told Insider.

The National Tax Agency told The Japan Times it’s promoting alcohol sales because fewer young people are drinking due to COVID-19 and a shrinking population. It described the initiative as a business promotion and said that “in no way is it encouraging people to drink excessively.” The National Tax Agency did not immediately respond to Insider’s request for comment.

This isn’t the first time Japan has launched a pro-drinking campaign. In 2017, the Ministry of Economy, Trade, and Industry encouraged office workers to leave work early on the last Friday of every month, in a bid to relieve Japan’s overworked employees. One of its suggested activities in lieu of working that day was “getting the gang together for some relaxed night drinking,” according to Japan Today. The campaign failed to take off, getting only 11% of employees to leave the office early, the outlet reported.