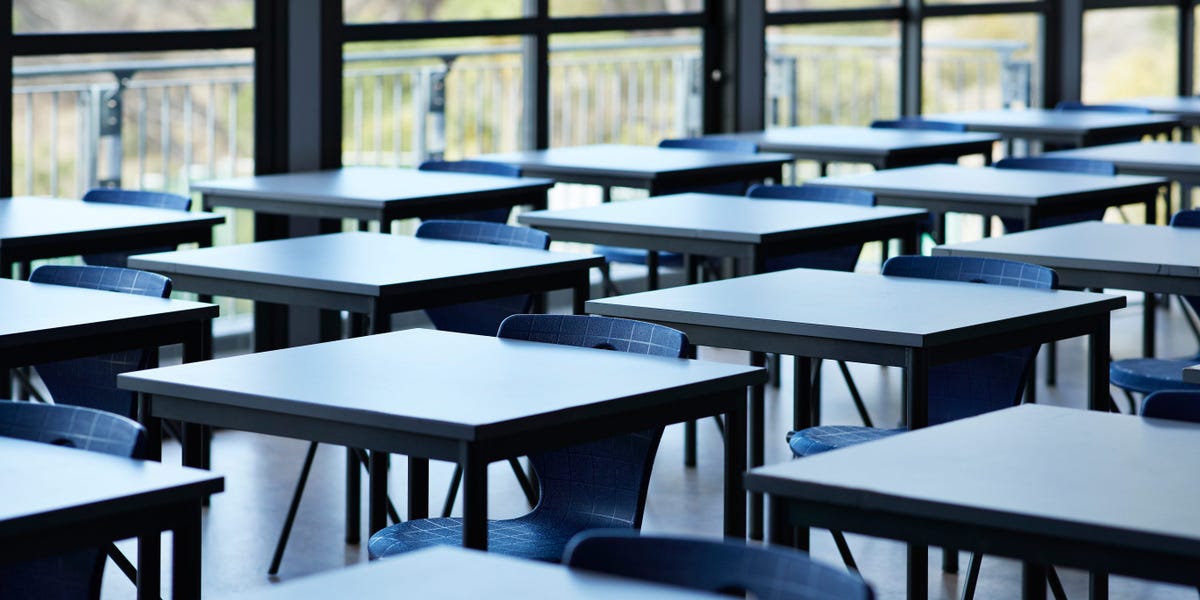 An off-duty Kenosha police officer was shown kneeling on the neck of a 12-year-old student in surveillance video released by school officials in Kenosha, Wisconsin, on Saturday.

The footage shows a fight breaking out between two students in the Lincoln Middle School cafeteria. An adult man, first identified by the Milwaukee Journal Sentinel as Shawn Guetschow, can be seen responding immediately to break up the altercation. Guetschow, a Kenosha police officer, worked part-time as security for the school.

Guetschow gets into a brief scuffle with one of the students before pushing her to the ground and kneeling on her neck. He’s shown in the clip using the chokehold maneuver for nearly 25 seconds on the student before handcuffing her and removing her from the room.

The other student, also female, is seen being ushered away by what appears to be another staff member.

The use of chokeholds by police officers was outlawed in Wisconsin in 2021 after the murder of George Floyd, except in life-threatening instances or cases of self-defense.

The girl’s father, Jerrel Perez, told The New York Post his daughter is seeing a neurologist following the March 4 incident. Perez is calling for criminal charges against Guetschow for using the banned restraint method on his daughter.

The family’s attorney, Drew DeVinney, said the officer’s knee was on her neck for an “unconscionable duration,” CNN reported.

DeVinney’s office did not immediately respond to Insider’s request for comment.

“This was a cruel and heartless act of violence aimed at a child and is unacceptable in our society,” DeVinney said in a statement, CNN reported.

CNN also reported that a criminal charge of disorderly conduct has been referred to the court system by the Kenosha police department for “both juveniles involved in the incident.”

Guetschow, who The New York Times reported has been an officer with the Kenosha police department for four years, worked part-time for the school district, and resigned from his position at the school following the incident.

The Kenosha Police Department and Unified School District did not immediately respond to Insider’s request for comment.

The Milwaukee Journal Sentinel reported that Guetschow wrote a letter of resignation to Kenosha Superintendent Beth Ormseth that read: “Given the events that have taken place and the escalated attention this incident at Lincoln Middle School has caused in the community, mental and emotional strain it has bought (sic) upon my family, and the lack of communication and or support I have received from the district, I can no longer continue my employment with the Kenosha Unified School District.”

Tanya Ruder, chief communications officer for the Kenosha Unified School District, told CNN on Friday that an internal investigation has concluded and added “as it appears that this incident may lead to litigation, the district will provide no further details at this time.”