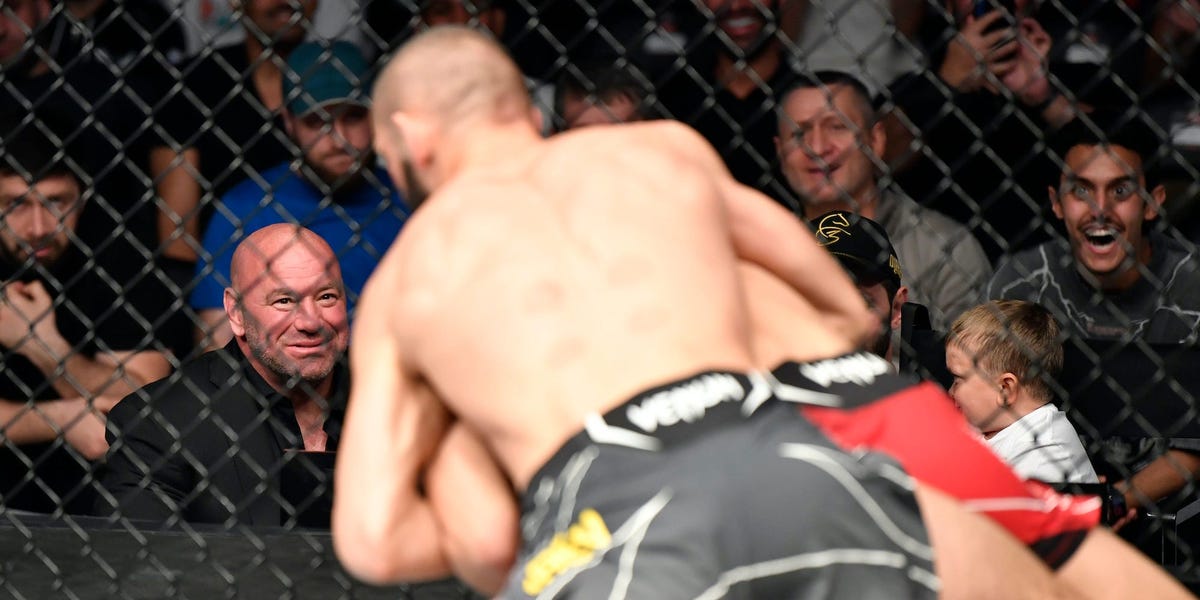 Chimaev and Jingliang had talked-up weird, cannibalistic violence throughout a fight week Insider attended in Abu Dhabi, United Arab Emirates, as they told media about taking hearts and drinking blood.

There was unique energy inside the 18,000 capacity Etihad Arena as they made their walks to the Octagon, with Chimaev pacing around his side of the cage while he waited for his opponent to step inside.

Within three minutes and 16 seconds of the first round, Chimaev had ended the fight like he has ended all of his MMA matches to date — in a conclusive, brutal fashion.

This was pure dominance.

Even after the bell sounded the start of the bout, Chimaev needed little opening nor invitation to lift Jingliang up and carry him to the side of the Octagon that the UFC boss Dana White was sitting at.

Chimaev could have taken Jingliang to the floor earlier, but wanted to speak to the UFC president while he lay a beating on the UFC’s No.11-ranked welterweight.

You’re right to think that sounds scary. This is a scary man, and he ruthlessly beat Jingliang without taking a single shot.

Jingliang, in comparison, threw one shot and didn’t land it, according to official UFC data.

Little more than midway through that opener, after relentless punching from a dominant position on the mat, Chimaev trapped Jingliang with a rear-naked choke.

Jingliang refused to tap and so he was sent to asleep, with Chimaev squeezing him unconscious.

The “Leech” lay on the canvas until he eventually regained his senses.

Chimaev climbed on to the top of the fence and held his arms aloft, triumphant, as he received the biggest cheer of the evening to that point.

And the aftermath of his submission win right here:

With his dominant and ruthless victory, Chimaev advanced his undefeated pro MMA record to 10 wins (six knockouts and four submissions).

He will also climb into the UFC’s rankings at 170-pounds, and screamed into the post-fight microphone that he wants everybody in the division.