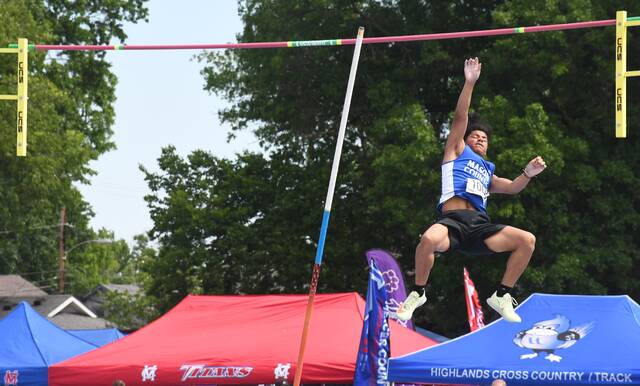 The Kentucky Track and Cross Country Coaches Association have released their All-state teams for the 2022 track and field season.

The process is pretty simple, making the team is based off results at the state track and field meets in Lexington.

Those who finish in the top two make the first team, then the third and fourth place finishers make the second team.

Young’s performance in the long jump had a best jump of 17-feet, 9.75 inches, just .75 inches off the first place mark to Boyle County’s Molly Wise. Her runner-up finish in the high jump came with a height of five-feet, four-inches.

Barrett tied for second at the state meet in the pole vault his height of 13-feet, six inches tying with the top three finishers, Highlands’ Rilen Pinkston getting first for clearing it in his first attempt, Barrett and Knox Central’s Logan Lambo clearing the pole in their second attempt.

Second team members were Fleming County’s Kalynn Pease, finishing third in the long jump with a distance of 17-feet, 2.5 inches and finishing fourth in the 100-meter dash with a PR time of 12.42.

Ava Thompson earned second team honors for her fourth place finish in the pole vault with a height of nine-feet, six inches. She cleared the mark on her third and final attempt to accomplish the feat. Thompson is a freshman who just took up the event this year.

Anthony “Bug” Bozeman also made the second team for his performance in the high jump, finishing fourth with a height of six-feet, two inches. Bozeman hadn’t competed in track and field in high school prior to transferring to Mason County and decided to compete his senior year.