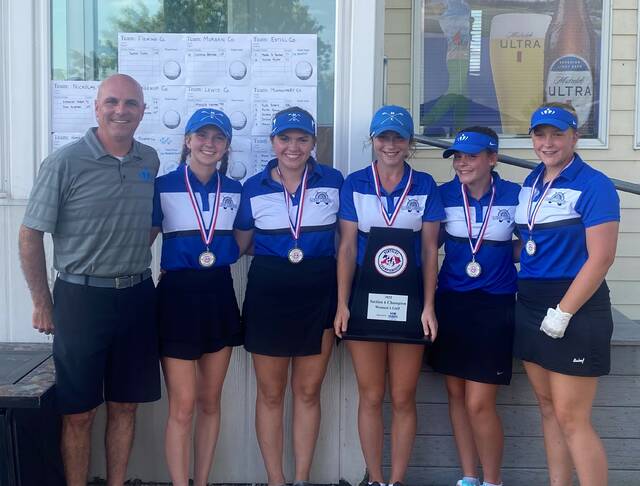 The Mason County girls’ golf team is headed back to Owensboro.

The Lady Royals won their Kentucky 2A, Section 6, sectional tournament on Wednesday at Laurel Oaks Golf Course to advance and compete with seven other teams across the state at Owensboro Country Club on September 12.

The team shot a 366 as the tournament also served as the Mason County Invitational that featured five teams and 37 golfers. The Lady Royals finished second overall to Montgomery County, the Lady Indians shooting a 364 to edge them out.

For the sectional, the Lady Royals just had to beat Rowan County to make a return trip.

“Heading back to Owensboro and that’s a great accomplishment for these young ladies. It’s a great experience and the 2A does it right,” Lady Royals coach Jason Butler said. “When you get to Owensboro, they take care of you. You don’t have to do anything. Everything is laid out. It’s a great golf course for the kids and we’re looking forward to return trip and I’ve got four out of my five headed back. Really happy for Bentley Shepherd too because she went as an alternate last year and didn’t get to play and will get a chance this year.”

Macey Littleton led the Lady Royals with an 81, which was also carded as the second best score on the day, Littleton earning the runner-up medalist.

“I should have shot better than that. Had a couple double bogeys and didn’t have any birdies so to finish with an 81 is pretty good. My chipping and putting was pretty good today,” Littleton said. “Excited to go to Owensboro again, it’s my senior year. It’s a tough course and really have to hit your driver straight there.”

She finished 10 strokes behind Estill County’s Maddie Jo Benton with a 71, staying smooth all day to win convincingly.

“I feel like I was kind of in a rhythm all day. Just tried to not really overthink anything and just played it as smoothly as I could,” Benton said, playing Laurel Oaks for the first time. “Trying to take the course in and I liked it a lot. Played a lot shorter than what I’m used to. I think that helped a bit too.”

The most positive outlook for the Lady Royals though? The whole team broke 100 on the day. Bentley Shepherd finished with a 92, Morgan Parker shooting a 95, Maura Hartman and Sydney Ullery wrapping up with 98’s.

“I believe in my tenure here the last five years as the golf coach, that’s the first time that has happened. The region site is right here. And, you know, for us to get that tournament experience competing against that many schools for each one of them to be under 100, I’ll take it,” Butler said. “The past regional tournaments we’ve been to, we’ve been in the 400’s as a team so that is huge. I like where we’re at right now.”

Laurel Oaks is the site of the 12th Region tournament this year and Montgomery County will be one of the team’s in it. If anything, Wednesday gave the Lady Royals a gauge of where some of the competition lines up in the region and where they need to be come mid to late September.

They’ll now get a 12-day break with their next time out on the course competing as a team will be August 8 when they host Lewis County in a match back at Laurel Oaks.

“We’ll get out and do a lot of work. Probably 100 yards in and try to find club management for ourselves a little bit better. I think in some terms we didn’t hit enough club today. And maybe that had something to do with how wet it was this morning,” Butler said.

Their next tournament isn’t until August 13 when they play in the Montgomery County Invitational in Mt. Sterling.

Lewis County had three individuals play on the day led by Laira Kennedy with a 96. MiKayla Kielman carded a 98, Laura Horsley with a 117.