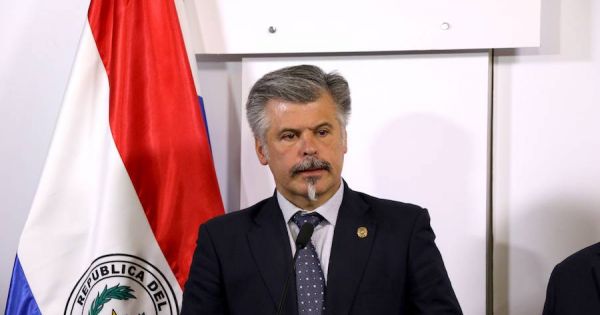 Paraguayan Liberal lawmakers have filed a motion to impeach Interior Minister Arnaldo Giuzzio, whose performance has been questioned over the past few days following a shooting during a festival, in which two people were killed and five others injured.

Deputies Édgar Ortiz, María de la Nieve López and José Reynaldo Rodríguez of the PLRA asked the Permanent Committee of Congress to move forward with Giuzzio’s removal from office and pressed for an extraordinary House session to discuss the issue.

Giuzzio will be required to appear before the Committee in a private session to account for the shooting at the Ja’umina festival in San Bernardino during which businesswoman and model Cristina Aranda and a man named Marcos Rojas Mora were killed.

I am not going to oppose his interpellation or impeachment if the plenary so requires, but as president of the Permanent Commission I am going to previously request a reserved session of the Permanent Commission because I believe that the information that he must have is of great interest for the internal security of the country, said Senator Lilian Graciela Samaniego González, who chairs the Committee.

According to Samaniego, both Giuzzio and the National Police needed to explain why red alerts for the arrest of suspected drug traffickers presumably involved in the criminal act had been deleted.

Giuzzio has told the press that two police officers had modified 27 times the data in the Police computer system on José Luis Bogado Quevedo, against whom an arrest warrant had been issued back in 2014 at the request of Brazilian authorities for his alleged links to organized crime.

Bogado Quevedo was one of the five people injured by gunshots during the shooting at the José Asunción Flores amphitheater last Sunday night. Police investigators believe the attack was due to a fight between rival gangs, although the actual perpetrators have not been identified so far.

President Mario Abdo Benítez has said he stood behind Giuzzio and showed no intention to replace him. The head of state insisted the fight against organized crime was to be permanent and that the acts of hired guns would continue to happen because new leaders always emerge.