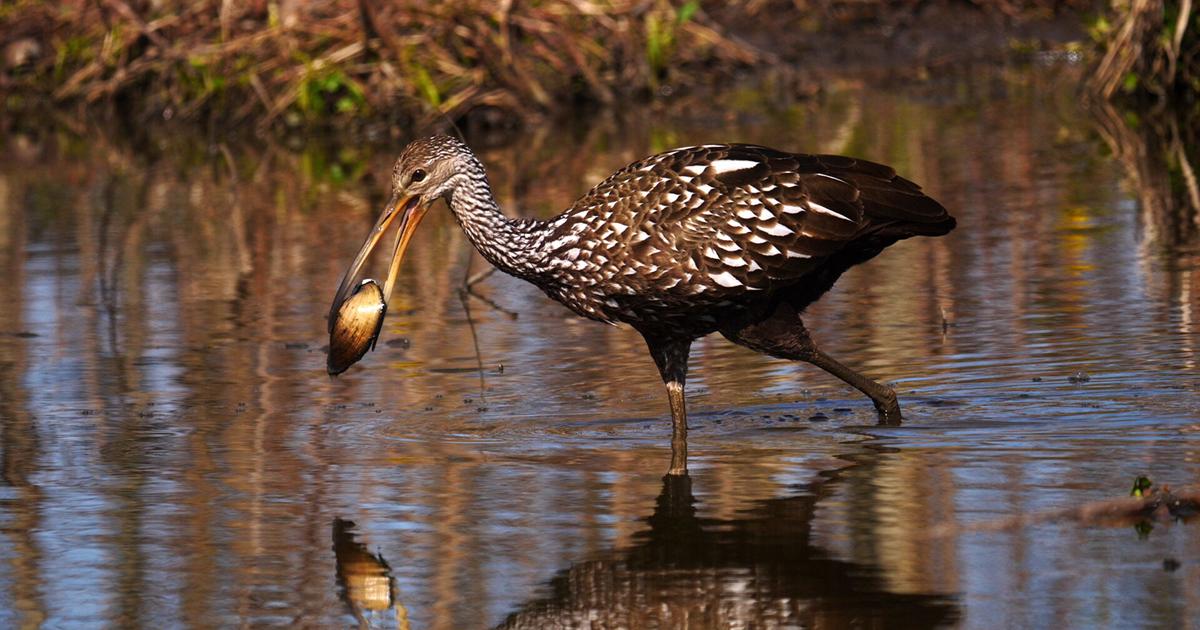 You won’t find limpkins in “Birds of Louisiana” field guides right now — but you may soon.

The limpkin (Aramus guarauna), also called carrao, courlan and crying bird, is a large wading bird related to rails and cranes found in mostly wetlands in warm parts of the Americas from Florida to northern Argentina.

Limpkins have a ravenous appetite for apple snails, an invasive species which have exploded in abundance in south Louisiana waterways and marshes and are difficult to eradicate. It’s not known how, but limpkins have learned about Louisiana’s bounty of apple snails and have rapidly made their home here in the state.

Robert Dobbs, the nongame avian ecologist for the Wildlife Diversity Program at the Louisiana Department of Wildlife and Fisheries, told members of the Baton Rouge Audubon Society recently that limpkins have moved into the state in a big way and that could be good news.

Almost all the reports documenting limpkin sightings are from the public participating in community science and logging their observations into eBird and iNaturalist Apps or emailing information to LDWF.

Limpkins were first discovered in the state about 4½ years ago; the first recorded observance was in 2017 in Lafourche Parish. In the spring of 2018, a pair nested successfully near Houma. Other pairs were noted in 2019 at Bayou Black in western Terrebonne Parish and in 2020 near Mandalay National Wildlife Refuge, also in Terrebonne Parish. Now, limpkins occur in virtually all coastal zone parishes, and breeding appears to be widespread.

Dobbs said that similar scenarios have occurred elsewhere, in which apple snails show up and become established, followed by limpkins, such as in Georgia and Alabama, for instance. Predictably, limpkins recently discovered the abundant apple snail population in southeast Texas, and almost immediately began breeding there as well.

Apple snails have spread largely due to the aquarium trade; they’re used in fish tanks by pet owners and then dumped into natural waterways. The snails thrive in freshwater environments and their tell-tail signs, other than the giant apple-size shells, are the bright pink “bubble gum”-looking eggs that will stand out in masses on tree trunks or concrete pipes or walls that stand in shallow fresh water.

Limpkins, once almost hunted to the brink of extinction in the early 20th century, resemble a crane, or perhaps, a long-legged rail. They are known for their loud wails that can be heard at night or dawn. Their long, slightly curved bills are perfectly suited for extracting apple snails from their shells. Dobbs said they are not known to pose any downside for Louisiana’s other wading birds.

“They wander around naturally,” Dobbs said.

“It’s possible we had some birds wandering around and they happened upon the Terrebonne-Lafourche area, which is full of apple snails. So why leave? There’s a ton of food. The habitat is good. Presumably the climate is OK. They’ve persisted thus far, and they’ve been nesting for four years now.”

Limpkins are found primarily in the American tropics and in Florida in the United States — and now, in Louisiana.

For more information or to report a limpkin sighting, contact Dobbs at rdobbs@wlf.la.gov.

This information is presented in conjunction with Louisiana Master Naturalists of Greater Baton Rouge, which seeks to advance awareness, understanding and stewardship of the natural environment. For more information, email info@lmngbr.org.