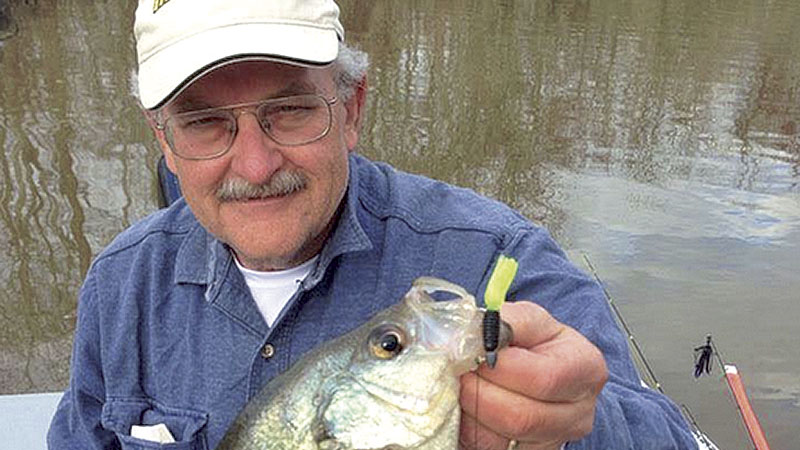 But Joe Macaluso doesn’t take credit for all that.

“All of us who write about the outdoors are here today because we followed in the giant footsteps of people who have gone before, who have blazed the trails and set the standards high,” Macaluso said.

For his accomplishments and his passionate effort to promote others in our outdoors, the Baton Rouge writer was recently inducted into the Louisiana Chapter Outdoor Legends Hall of Fame.

Macaluso is most widely known as the veteran outdoors editor of the Baton Rouge Morning Advocate. He has won numerous awards including the Louisiana Governor’s Conservationist of the Year in the Communicator category and the Arthur Van Pelt Lifetime Achievement Award from the Louisiana Outdoor Writers Association. In 2014, Joe was also presented the Distinguished Service Award in Sports Journalism by the Louisiana Sports Hall of Fame.

You’ll also find his writing right here in Louisiana Sportsman magazine in his monthly “Down on the Dock” column, a mix of humorous stories and entertaining views on our outdoors.

Besides writing, editing and publishing two full pages of outdoors in the newspaper for years, Macaluso also freelanced in several publications such as BASSMaster magazine and Louisiana Sportsman. One of the state’s most respected and admired outdoors writers, Macaluso has also covered a wide array of sports beats, served as a TV show host and correspondent, and has been the longtime official scorer for LSU baseball.

He has been awarded/recognized more than 90 times (as a top three finisher) for stories in state, regional and national organizations — notably AP National honors for a series, then the game story on Eddie Robinson breaking Bear Bryant’s career win record; and a series of stories on the devastating effects of Hurricane Andrew on the Atchafalaya Basin and surrounding waters. He also wrote the Louisiana section of the World Encyclopedia of Fishing.

Working in the hub of one of Louisiana’s largest outdoor areas, Macaluso has always said he felt it was a privilege to cover the people and resources of our state’s outdoors. But even more important than his writing, he was also involved in many conservation efforts that impacted thousands in the state, one of which he is most proud.

In 1994, Joe was one of a group of local hunters who gathered to discuss sharing the game and fish they harvested each year with the needy in the Greater Baton Rouge area. The hunters contacted the Society of St. Vincent de Paul, and the donations that first year were given to their dining hall. Thereafter, the response from hunters was so great that the dining room’s storage was soon pushed to the limits, and help was enlisted from the Greater Baton Rouge Food Bank.

Since then, “Hunters For The Hungry” has increased awareness of their program throughout the state by partnering with all 5 major food banks in Louisiana. By conducting multiple programs such as the Clean Out Your Freezer Day and Freshly Harvested Game and Fish Programs, the organization is providing thousands of meals for Louisiana families. They have gone from collecting 4,800 pounds of fish and game to more than 200,000 pounds annually and seen to it that laws were passed to protect hunters and fishermen who donated to the cause.

“There are so many people who have helped me do what I do that I can’t name them all,” Macaluso told the audience at the Legends banquet. “But I want to give a special thanks to Mike Cook, the former Outdoor Editor for our paper for many, many years. Mike gave me the chance to start a fishing column in the State Times newspaper and that is where it began.”

Macaluso has always had a passion for writing and for helping uncover issues that needed attention in the state’s outdoors, even if it wasn’t popular.

“For me this has always been a passion,” he said. “I’ve always had a passion for fishing and I developed a passion for duck hunting. But seeing the passion others had for what they did, it made me want to ensure we covered the outdoors. It’s important that others follow that same trail we did. Look, in 1991 when I first became the Baton Rouge paper’s outdoor editor, there were nine full-time outdoor writers in the state. Today, there are none. That should tell everyone the challenge we face in communicating the outdoors.”

Macaluso also thanked his wife Cheryl for allowing him to do what he did. Outdoor writing meant he was gone many times, including parts or all of weekends for most of the year. A strong Christian man, Macaluso also gave thanks to be living in America where we are free to worship and pursue what we want to do.

“My grandfather came over from Sicily some 115 years ago,” he said. “He always made sure we understand that no other country in the world allows an opportunity to do what we want to do and if we work hard at it, to make money at it. It’s a privilege. It’s a privilege we better make sure our children and our grandchildren understand.”

Macaluso also leaves us with one other thought.

“Believe it or not, there are people in this country, in this state, that do not want us to hunt or to fish,” he said. “It’s important for us to responsibly take care of and promote our outdoors and protect it from those people and groups.

The Legends Hall of Fame was founded by Gerry Mason of Springville, Tennessee, in 2002. The Louisiana Chapter is headed up by Peyton McKinnie of Marion. You can find out more about the groups on Facebook.