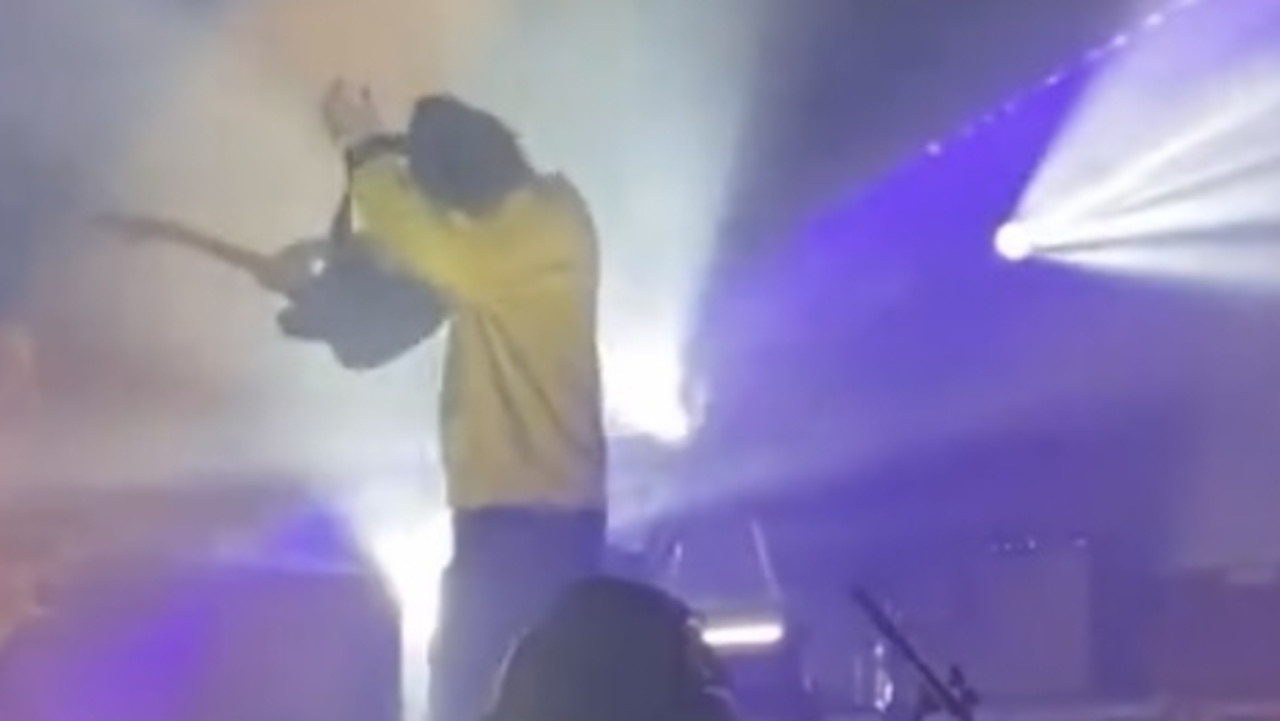 Controversial Australian band Sticky Fingers frontman Dylan Frost admitted he “lost control” when the lead singer sensationally stormed off in the middle of a concert last night in Melbourne.

The band was seven songs into its set when Frost appeared to become upset onstage. Video footage captured by a concertgoer and uploaded to social media shows Frost striking the microphone and throwing his guitar to the ground.

The rest of the band – Paddy Cornwall, Seamus Coyle, Beaker Best and Freddy Crabs – then followed him offstage.

According to the Herald Sun, a faulty microphone may have triggered the tantrum during the song “Not Yet Done”. Boos could be heard from the crowd.

Another 10 minutes passed before it was announced that the show had been cancelled.

On Sunday afternoon, Frost posted a statement to Facebook apologising to fans.

“I’m really sorry for last night in Melbourne,” he said.

“I’ve been working hard on myself and will continue to prioritise my health, but I still let a lot of you down.

“I want to apologise to the fans and my band, our crew and venue staff.

“The tour has been amazing so far and we wanted to end it big, but I just didn’t have it last night and I lost control. We’re working on a new date to make it up to everyone or refunds for those who want them and we will let you know plans soon.”

The Saturday night Festival Hall gig was the last performance of Sticky Fingers’ Australian tour. The band had played on Friday night in Melbourne without drama. It’s expected the band will still perform in New Zealand next month.

An audience member told the Herald Sun, “The atmosphere at the gig initially was great. But then we only got three songs in and Frosty cracked the s**ts, stormed off and cancelled.”

Other concertgoers took to Facebook to express their annoyance.

Per the Herald Sun, a fan named Jordan Patrick wrote on social media, “Unbelievable, I’ve been waiting for tonight for years, was so excited and absolutely devastated they ditched the show like that.

“So disrespectful to the fans who have stuck by them and waited to see them after such a long time.”

Other fans said they had flown to Melbourne specifically for the show.

Sticky Fingers was previously engulfed in scandal when Indigenous artist Thelma Plum alleged Frost had in 2016 racially abused and threatened her. The accusation sparked a raft of boycotts.

Frost and the band denied the allegations but later issued a mea culpa around unspecified “unacceptable” behaviours and claimed that alcohol addiction and mental health issues were contributing factors.

Frost wrote in 2016 that he would seek therapy and rehabilitation and that he was “truly sorry to the people that have been affected by my behaviour” and that he hoped to “one day make amends for my actions”.

Frost isn’t the only band member to be embroiled in public spectacles. Bassist Cornwall had to issue an apology for 2019 rantings against ABC’s youth station, Triple J.

He initially said in an expletive-laden video posted to social media, “Triple J, f**k you and your f**king artist repertoire. We don’t f**king need you. We don’t want you because you play your f**king bullshit and you’re a bunch of f**king maggots.”

A year later, Cornwall apologised for his words. He conceded that the relationship between Sticky Fingers and Triple J had fractured due to his actions.

He said in May 2020, “I was outta my head, not dealing with personal battles of my own, I’m sorry to the people I hurt at the station, as well as my own team.

“I ain’t the same derailed, angry person you saw last year. I’m not where I want to be yet but I’ve been doing a lot better, dealing with my demons. I hope sharing this helps find a resolve on the situation.”

In 2019, Frost and Cornwall were arrested for a violent punch-up between the pair at Marrickville Bowling Club in Sydney. It occurred after the band members had been drinking for six hours.

Cornwall was in 2021 sentenced to a 18 months, to be served in the community.