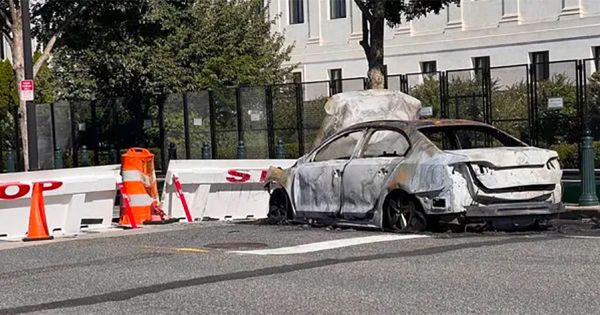 A man in Washington DC Sunday drove his car outside the US Supreme Court and started firing gunshots in the air before committing suicide just before 4 am. The building at East Capitol Street NE and 2nd Street SE is also one block from Capitol Hill.

Richard A. York III crashed his car into a barricade. As he was getting out of the car, it became engulfed in flames, Capitol Police said. The man then fired several shots into the air along East Capitol Street.

Capitol Police Chief Tom Manger told reporters he believed York might have set the car on fire after it crashed. It does appear that it was not the collision with the barricade that caused the fire, Manger said. It appears that the individual may have started the fire himself as he was getting out of the car. His background and his death are under investigation. “We don’t have any information that would indicate his motivation at this point,” Manger also said.

Authorities have been on heightened alert since the 2021 incidents when supporters of then-President Donald Trump stormed the Capitol building.

In May, non-scalable fencing was set up outside the Supreme Court building as protesters demonstrated as the ruling overturning Roe v. Wade was announced.

In June, Capitol Police arrested a Michigan man who was carrying a fake Interpol badge, BB gun, body armor, and high-capacity magazines outside the Capitol. He was identified as retired New York police officer Jerome Felipe, 53, of Flint. And in July they arrested a man on charges of possession of Molotov cocktails after he allegedly attempted to throw one of the bottles at two officers several blocks northwest of the Capitol complex.

The new case of violence comes at a time when law enforcement authorities nationwide are facing an increasing number of threats following the FBI’s search of former President Donald Trump’s Mar-a-Lago estate in Florida.

In April 2021 a man drove a vehicle into two Capitol Police officers at a checkpoint, killing an 18-year veteran of the force.

Investigators located addresses for the man in Delaware and Pennsylvania and have learned he had a criminal history in the past decade, though his motive remained unclear and he had no links to the Capitol, Manger explained.