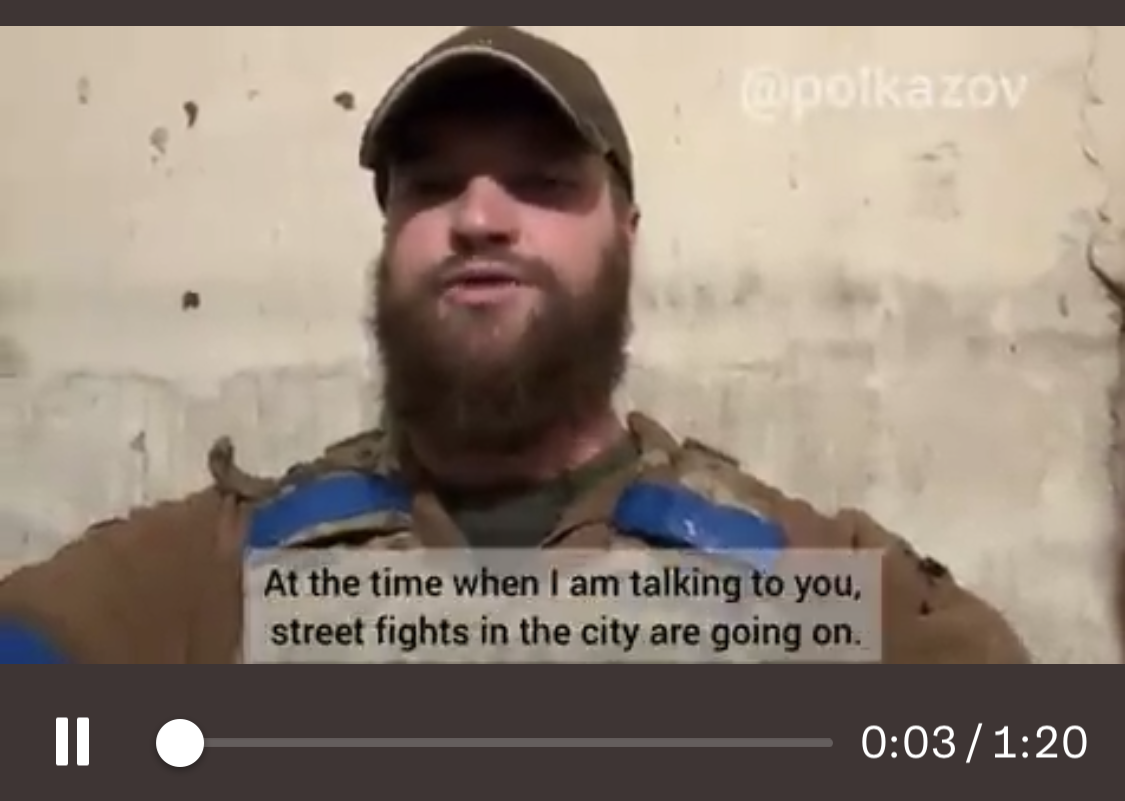 A high-ranking National Guardsman in isolated Mariupol released a video explaining the dire situation in the besieged Azov Sea coastal city of Mariupol in the eastern Donetsk region.

Speaking on his social media Telegram channel, Palamar said the “enemy aircraft doesn’t stop the bombing even for a moment.”

Before Russia’s renewed invasion of the invasion on Feb. 24, Mariupol had a population of about 500,000 and hosted internally-displaced people from when Russian President Vladimir Putin ordered the seizure of Crimea and certain parts of eastern Ukraine.

Ukrainian presidential adviser Tetyana Lomakina said on Facebook that the port city’s “citizens…are staying in basements while trying to drink water from puddles or drain moist from circulation systems.”

She added that “food is cooked on a campfire…now the pauses in the bombing have become very short and it has become very dangerous to come out of the basements.”

About 5,000 residents from the city were evacuated on March 17, Lomakina added.

Invading Russian forces have blockaded the city for 18 days and some 350,000 people still remain trapped in there, according to local authorities. Altogether, about only 30,000 residents have managed to flee to seek refuge elsewhere.

Municipal authorities say that 80 percent of Mariupol’s housing has been either destroyed or damaged from indiscriminate and relentless Russian bombardment.

Occupying Russian forces are “destroying everything that has survived in this city,” said Capt. Palamar.

The city is being attacked by multiple-launch rocket systems and “tanks around the city shoot just passersby…People are dying under the rubble,” he said.

More than 2,500 people have been killed in the city alone and the United Nations says that 3.2 million people have fled the country and 6.5 million more are displaced inside the country since Putin ordered a renewed invasion of the country on Feb. 24.

“I want the whole Ukraine to know that the defenders of this city, the military, are not just fulfilling their duty to defend their homeland, but a thousand times more,” Palamar said who also is based there with Marines and territorial defense units.

Military experts say that a part of Russia’s objective is to create a land bridge to Ukraine’s Crimean Peninsula, which Moscow forcibly seized in 2014. Then, a pro-democratic popular uprising came to power in Kyiv, which saw Viktor Yanukovych, a pro-Russian politician and incumbent president, abandon office. He fled to Russia and has since been tried for treason in absentia.

More than 14,000 Ukrainians have died in the Russo-Ukrainian war since 2014 and President Volodymyr Zelensky said that at least 1,300 servicemen have as well since the renewed invasion late in February.

Russia has lost more than 14,000 military personnel, Ukrainian Defense Ministry says but those figures are not possible to independently verify.

Indications of guerilla warfare in the city on social media have been noticed while Palamar said there is “street fighting.”

A U.S. senior Defense Department official said at noon on March 18 that “Russian forces are in the north and east of” Mariupol, according to a media pool report from the Pentagon.

“Mariupol is Ukraine! The Azov Regiment and other defenders are doing everything possible to protect the city,” concluded Palamar in his video address.

So far, Russia has made few attempts to take Odesa, one of the country’s largest cities, which is also a strategic port city along the Black Sea. Should the city be taken along with Mykolyaiv and Mariuopol, Ukraine will be cut off from maritime waters.