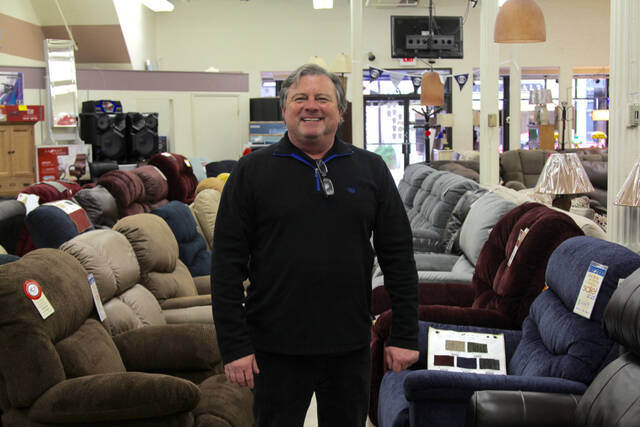 McRoberts and his family have owned and operated a popular furniture store for 45 years, marking the day on April 1 of this year. The store was first located on top of the hill but moved downtown in 1990.

Main Street Director Caroline Reece said, “Kevin’s name has come up about a year ago, but the board thought that this special anniversary was the perfect time to honor him and his family. Forty-five years in business is an incredible accomplishment under any circumstance, let alone when a pandemic gets thrown in the mix.” The McRoberts family and business will be represented in another way on the 4th – they donated the bicycles that will be given away to the top two winners of the bike decorating contest.

McRoberts will be guest of honor at the parade that begins at 7 p.m. Line-up is under the train trestle on East Second Street at 6:30. Anyone is encouraged to join the parade with no fee or registration required. Reece believes that is why the parade gets bigger every year.

“Folks can get up on Monday morning and decide they want to deck out their bike, boat, truck or grandma and head on downtown and participate that evening,” she said. She added that floats are especially welcome from any church, school, neighborhood, business, or community organization that wants to get in on the fun.

The day starts early with a 5K-run/2 mile walk sponsored by the Knights of Columbus. Check-in begins at 6:30 a.m., at Limestone Landing. Afternoon events begin at 3 p.m., with a Little Miss and Mr. Firecracker pageant sponsored by the downtown merchants. The little Yankee Doodle dandies and sweethearts, ages 5-8, can gather at Second Street Mall. Applications can be found at the following downtown businesses: Bradley’s Boutique and Haberdashery, Kenton Stories with Spirit, Local Kentucky 68, McRobert’s Furniture, Merle Norman, Mimi’s Boutique, and Whitney’s.

A new offering is a pet pageant, also on Second Street Mall. The pet pageant is sponsored by Maysville Green Dot and begins at 4 p.m. Every pet gets a treat, and prizes will be given for Most Exotic, Cutest, Best Costume, and Best Trick. Registration is before the event and, in lieu of a registration fee, a donation of a pet-related item for the Ion Center’s Companion Kennel is requested.

Inflatables and a giant water slide will be at Rotary Park beginning at 4 p.m. Hot dogs, chips, and a drink will be available for the kids and is provided by the VFW.

“The folks at the VFW are such great community partners,” Reece said. “They sponsor the Trunk or Treat during our Downtown Halloween and asked to be involved in even more events. “ The bicycle-decorating contest will also be at Rotary Park at 6 p.m. Each participant gets a t-shirt donated by Wald Manufacturing and the winners get those aforementioned bikes from McRobert’s Furniture.

Down the street at Limestone Park, food, music, and vendors also begin at 4 p.m. A special treat is an appearance by the Rhythm & Soul band starting at 5. They will play until parade time at 7. After the parade, last year’s favorites, The Chuck Taylors will take over the stage at Limestone Park and entertain until the fireworks at dark.

Reece said she and the Main Street Board are very appreciative of Bruce Carlson for always making the beautiful park available for the Independence Day festivities.