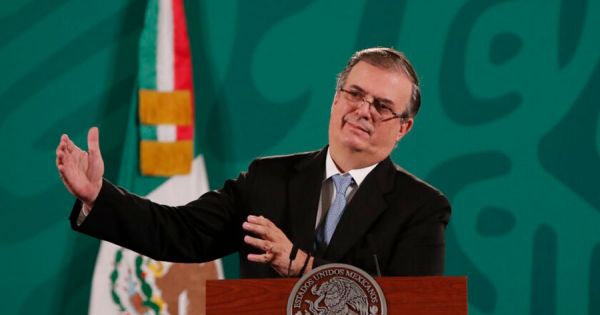 Mexican Foreign Minister Marcelo Ebrard landed in Bolivia Thursday to take part in a series of events and hold meetings with local authorities, as part of his tour to foster a joint strategy to exploit lithium resources

Ebrard, who arrived from a stopover in Peru, was welcomed at La Paz’s El Alto airport by dignitaries of the Bolivian Foreign Ministry and by Mexico’s ambassador María Teresa Mercado Pérez.

Ebrard plans to strengthen historical ties between his country and that of his hosts, according to Bolivian Foreign Minister Rogelio Mayta, who has said that this official visit will allow us to strengthen the historical ties of more than 190 years of diplomatic relations and strengthen the bilateral agenda in different areas, framed in the cooperation and solidarity between the two brotherly peoples.

Mayta highlighted the importance of Ebrard’s visit and underlined that the Mexican official will fulfill an important agenda in the South American country. He will also visit the Uyuni salt flat and will accompany us in the [Independence Day] celebrations on August 6 in the city of Sucre, Mayta also explained.

After 197 years of independence, Bolivian President Luis Arce Catacora is to deliver a message marking the occasion to all Bolivians.

Meanwhile, El Heraldo de México said Ebrard will visit Bolivia and other South American countries to negotiate a block between countries in the Americas to exploit lithium.

If Latin America coordinates, Argentina, Chile, Peru, Bolivia, and Mexico would have more than 65 percent of the world’s lithium; it is one of the strategic minerals for the future, the newspaper said.