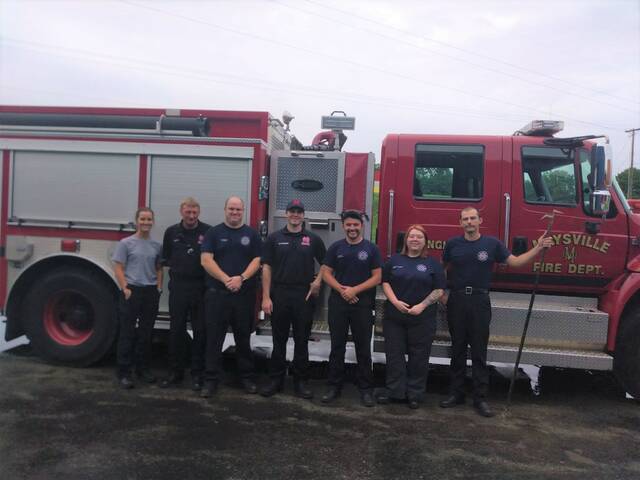 The Maysville Fire Department has put together a firefighter challenge which will be held on Wednesday, Aug. 3, at the Germantown Fair.

Firefighter/EMT Casey Appleman said they are holding the challenge for only one night and sign-up starts at 7 p.m. on Aug. 3 and is free to enter.

“The challenge is open to the public, people will get to experience some of the physical aspects of a firefighter’s job,” Appleman said.

Firefighter/Paramedic Ian Riggins came up with the map for the lay-out of the challenge, according to Appleman.

“This is a modified course of the physical agility which firefighters do every year, it’s a timed obstacle course and the top three to complete the course with the lowest times will get a trophy and another prize we’re putting together,” Riggins said.

According to Appleman, the time limit on the regular version of this course is eight minutes for trained firefighters.

“There’s going to be two categories; one will be the single person category who will do the challenge on their own and the other will be teams of three,” he said.

According to Riggins to keep the competition fair each participant can only compete in one category.

The obstacle course will be very physically challenging and will have a minimum age requirement of 15 years old and those who enter will have to sign a waiver, said Appleman.

“One of the obstacles is a wall breach, they’ll basically have to crawl through a simulated wall between 16-inch studs (boards) while wearing an air pack which is a very heavy piece of equipment; then they’ll have to do a roof prop, which is where they climb a ladder onto a roof while carrying a charged fire hose,” Appleman said.

The contestants will also have to carry a fire hose for 150 feet to an enclosed area where they will then have to reel the hose in, according to Appleman.

“Another challenge is the dummy drag, that’s a 180-pound mannequin that they’ll drag for 50 meters, then there’s the keiser sled,” Riggins said.

According to Appleman and Riggins, the keiser sled is a 200 pound block of iron which will be sitting on a piece of plastic; participants in the challenge will hit it with a sledge hammer and the goal is to move it a minimum of three feet.

“We think the keiser sled is going to be a big draw for this challenge, the obstacles are physical but they’re also a lot of fun,” Appleman said.

There will be a few other obstacles including using the fire hose to clear traffic cones and other items off of a platform, said Appleman.

“This is actually the first year we’re doing this, we have been planning it for a few months now; we’re also kind of using it as a chance to drum up interest,” Riggins said.

The need for more firefighter volunteers and career firefighters is always great and Appleman said he hopes this event will encourage more people to get involved.

Members of MFD and volunteer firefighters will be on hand at the firefighter challenge to reset the obstacles and keep it as safe as possible.