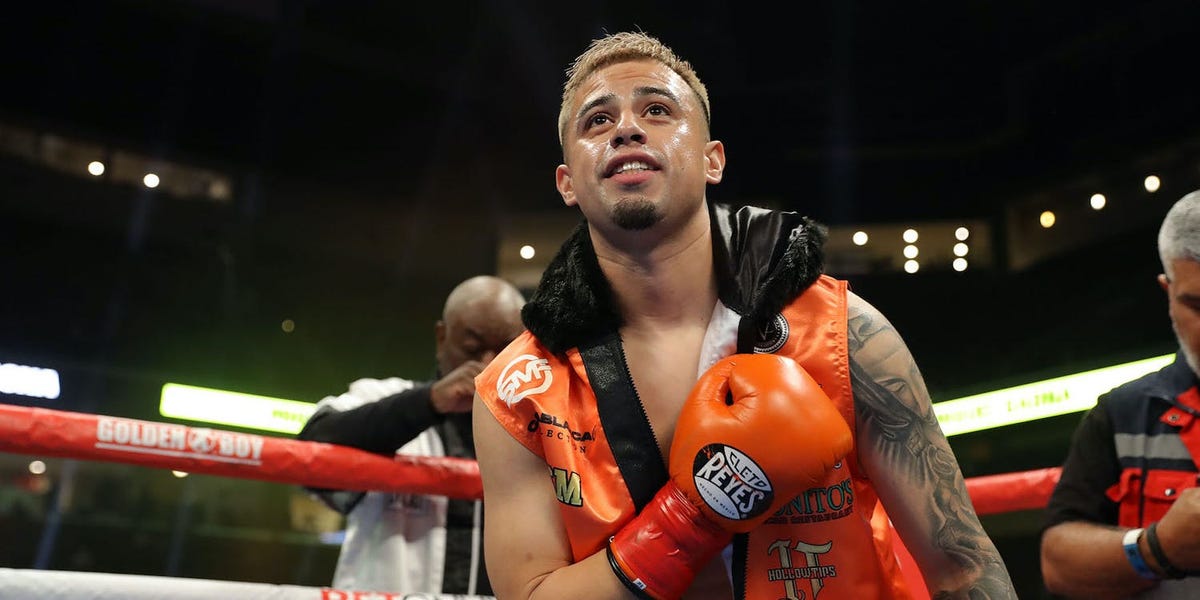 It all went down during the preliminary section of the Golden Boy Promotions event held at the Galen Center in Los Angeles, broadcast on DAZN.

Gaona is a boxing novice who had only one pro fight to his name before he swung fists at super lightweight opponent Gilberto Aguilar for a four-round bout.

But the burgeoning prospect showed few signs of inexperience as he essentially bullied and bludgeoned his way to a grueling victory after a somewhat patient and methodical start.

Gaona stepped forward and measured the distance to Aguilar with pawing shots before unloading with a merciless attack when he had backed his opponent into the corner.

Gaona mixed his attack up with head shots and body blows and it seemed like the latter left Aguilar in a heap on the floor, unable — or unwilling — to continue.

In a statement sent to Insider, Gaona, who advanced his pro boxing record to two wins (one knockout) with the finish, said: “I am not surprised by the early knockout.

Later, Insider saw Gaona fraternizing with friends and fans near press row, and he barely had a scratch on him.

Elsewhere on the card, Elsewhere on the preliminary card, Dalis Kaleiopu beat Manuel Lara late in the fourth round by knockout, John Ramirez overcame Roberto Pucheta after six rounds by decision, and Ramla Ali scored a second-round finish over Shelly Barnett in a featherweight scrap.

Alejandro Reyes, who Insider profiled earlier this week after speaking to the youngster and his coach Jose Saucedo, earned the seventh win of his career by defeating Daniel Evangelista Jr.

See the climactic end to the bout right here:

Reyes called the six-round decision win “a great experience” in a post-fight statement sent to Insider.

“It was a tough fight and we knew that coming in,” he said. “I had to listen to my corner. We made the adjustments that we needed to as the fight progressed.

“He was a tough fighter. He had a lot of experience. It was a great learning experience and thank God we got the job done.”

Knockout puncher Vergil Ortiz Jr. was due to headline the show but spent Monday night in hospital because of rhabdomyolysis.

In a statement upon the start of his recovery, Ortiz said “things could have been worse.”