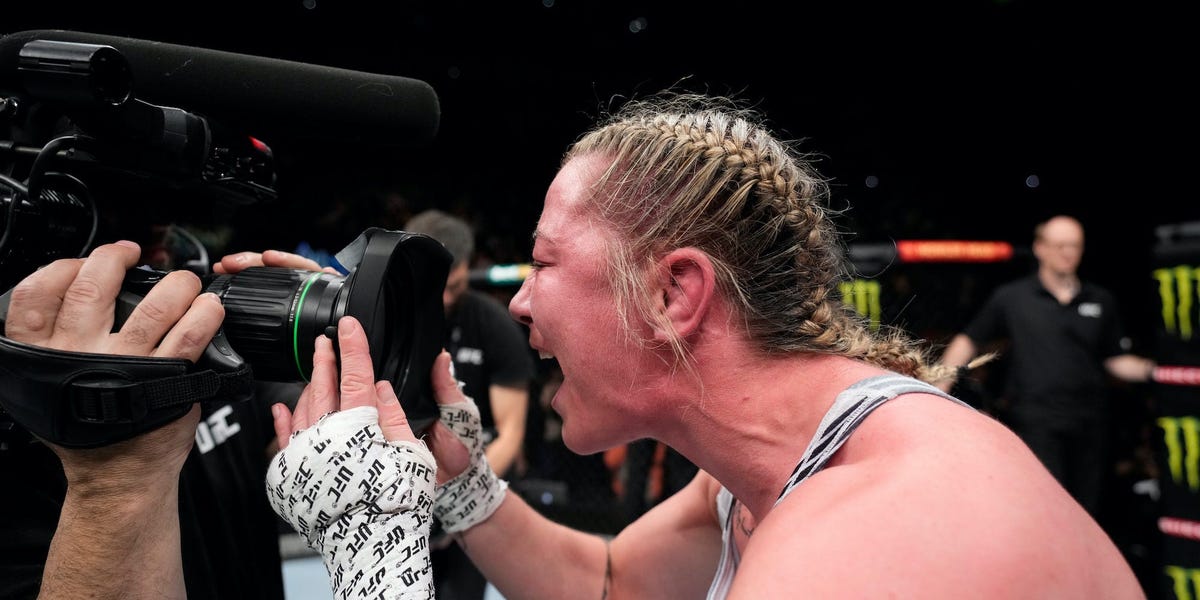 MMA flyweight Molly McCann scored the most brutal, brilliant, and beautiful knockout of the year so far.

It all went down Saturday at the UFC Fight Night event in front of a raucous atmosphere at the 02 Arena in London.

McCann is one of the more popular fighters in Britain and she sent her army of fans home happy after obliterating Luane Caroline with a spinning elbow strike that looks better with every viewing.

A former Cage Warriors champion, McCann dominated Caroline throughout the contest as she threw an obscene 112 strikes in the opening round and landed 61.

Though McCann maintained pressure in the second, she threw less but was more accurate before finally getting her highlight-reel stoppage in the third.

In total, McCann connected with 99 of her 174 strike attempts for an accuracy rate of 57%.

But, ultimately, only one shot mattered — that spinning elbow that landed so accurate, so hard, that it wrecked Carolina’s world and left her on the canvas for approximately 10 minutes.

It was unclear when Carolina truly recovered as she still didn’t seem to have regained her senses even after she was being helped out of the arena.

McCann’s friend and fellow fighter Paddy ‘The Baddy’ Pimblett, who scored a first-round submission win of his own on the same night, was in disbelief at the destructive nature of the elbow strike.

“She got sent to the shadow realm,” he said, according to ESPN+. “That was exceptional. Oh my Jesus.”

McCann advanced her pro MMA record to 12 wins (five knockouts and seven decisions) against four losses, and will almost certainly be in the conversation for the knockout of the year gong for 2022.

Earlier in the evening, mega bantamweight prospect Jack Shore out-pointed Timor Valiev, Paul Craig submitted Nikita Krylov with a triangle choke, and Tom Aspinall appears to be emerging as one of the baddest heavyweights on the planet as he scored a first-round submission win over Alexander Volkov — his toughest opponent to date.