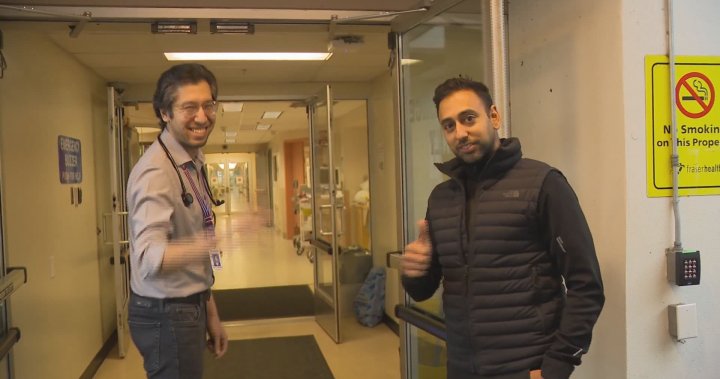 Doctors who work at Fraser Canyon hospital in Hope, B.C., say they were not equipped to treat the number of injured victims from Sunday night’s mudslides along Highway 7 — but are grateful to the stranded medical professionals who came in to help.

Dr. Stefan Patrascu was the only doctor working at the community’s hospital when the mudslides injured multiple people and left hundreds stranded.

Read more:
B.C. floods: Gas to be rationed in some areas, some highways to be essential travel only

“I was the only E.R. doctor in town and that was probably the most stressful shift of my career thus far,”  Patrascu said.

“We did get some seriously injured victims from one of the mudslides.”

Patrascu only had the assistance of four nurses at the 10-bed facility when search and rescue crews started flying in one patient after the next, he said.

2:14
BC Floods: Driver who survived slide thanks strangers

BC Floods: Driver who survived slide thanks strangers

Some of the mudslide victims, including a teenager, had critical injuries.

“Having a very young patient that was critically injured and not being able to transfer them out by land or by air for 24 hours was extremely stressful,” Patrascu said.

In that first 12-hours, while Patrascu the nursing team were trying to treat as many patient as they could, other doctors from outside Hope were trying to make their way into the district to assist.

Dr. Aseem Grover said he and another physician had to take back roads and then board a CN track vehicle that slowly made its way along the rail lines towards Hope.

Both of them had picked up critical care supplies and medicine to take into Fraser Canyon hospital.

“It was too dangerous to fly in because the wind speeds were about 90 kilometres an hour,” Grover said.

They arrived Monday afternoon and were able to provide additional assistance, but the extra staff still didn’t allow enough time for doctors and nurses to rest.

“You can only have people work a certain number of hours in a day and they need relief also, right?” Grover said.

“Initially our volumes did increase, but the number of people calling, looking for shelter, supplies, that was quite significant.”

That’s when the hospital started looking for help among the people from other parts of B.C. who had been stranded in Hope due to the mudslides.

Grover said there were obvious signs that health-care workers were among those stuck in Hope,  because there were stories spreading in the community of people doing ‘health-checks’ on large groups and families.

“People were doing a ‘needs-assessment’ on our trapped people. They very quickly took the roles and reigns of checking around and you could easily identify who could provide assistance and they easily stood out,” said Grover.

Staff at the hospital immediately reached out to the individuals when they heard these stories, he added.

“From there, it was really just about getting them clearance and getting to the work in the hospital within no time,” Grover said.

According to him, the number of staff at the hospital tripled, including the addition of five additional doctors.

“After that, it was a much more manageable situation where we were able to rotate through shifts and we could get a rest for a few hours at a time,” Patrascu said.

“I want to thank the community, it is beautiful to see how the community came together to support one another, everyone who was stranded here.”

Both doctors say the hospital is still treating a lot of local patients and are making sure they’re more prepared for any similar incidents down the road.