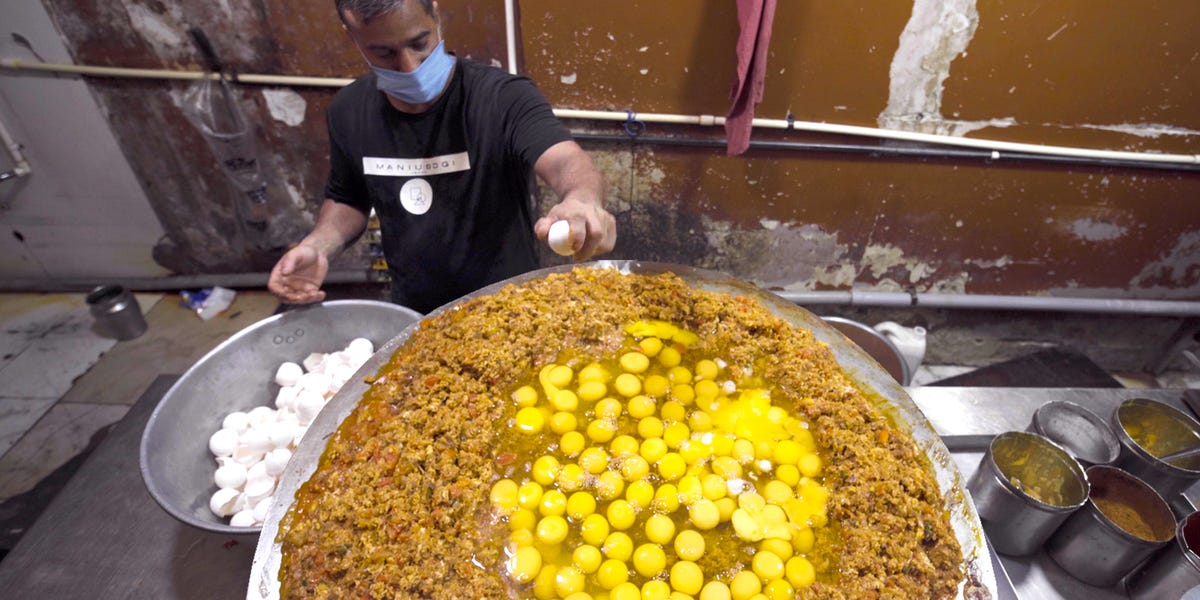 Following is a transcript of the video.

Narrator: There are 200 eggs in every batch of this famous Indian street food. Chef Mohammad Nasir can make up to 10 batches per day. That’s 2,000 eggs. Egg bhurji is India’s take on spicy scrambled eggs. It’s a specialty of the Indian state of Maharashtra.

We visited Pav Bhaji and Bhurji Center in Mumbai to find out how this dish is made and see just what it takes to make such big batches. It begins by finely dicing tomatoes, onions, and cilantro. For a daily portion of egg bhurji, this stall uses and chops approximately 88 to 110 pounds of tomatoes, 66 to 88 pounds of onions, and 10 to 15 bunches of cilantro. Next, oil is added to a tava, or griddle, followed by a mountain of chopped onions, which are fried for a few minutes before green chilies and tomatoes are added.

Narrator: Next, a medley of spices is added. The vegetables are cooked and smashed using a masher until the tomatoes and onions melt and form a thick emulsion of all the flavors. Once the tomato-onion emulsion is nearly cooked through, each egg is slowly cracked by hand in the center and added onto the heat. The eggs are scrambled with a spatula, and the outer layer of the tomato-onion emulsion is slowly incorporated. Next, the fully cooked egg bhurji is pushed to the perimeter. In the center of the tava, butter is melted, followed by finely chopped green chilies and large spoonfuls of multiple spices. This process is called tadka, a common Indian cooking technique that allows for the tempering of whole or ground spices in oil, butter, or ghee. This process enhances the flavor and aroma and creates a richly spiced dish. The final dish is garnished with cilantro and portioned into plates for each customer to enjoy. It is served with a buttered, toasted piece of pav and an onion-tomato salad. If the spice is too much to handle, you can request a side of yogurt. Unlike scrambled eggs, egg bhurji isn’t limited to breakfast. It can be eaten throughout the day. In fact, this stall attracts its largest crowds between 10 p.m. and 3 a.m.

Narrator: A single batch with 200 eggs takes three hours to make, from chopping the vegetables, cracking all the eggs, and frying to serving the final dish. A single batch is sold within one hour, feeding 60 to 70 people. Mohammad Nasir is an expert at making the dish. His street stall is now famous in Mumbai. Pav Bhaji and Bhurji Center has been attracting crowds for over 10 years. About 500 people visit a day to watch vendors make this high-volume dish.

Chef Mohammed Nassir: Look, bhurji is famous only in Maharashtra. In India everyone can also just make it at home nowadays, but still people come to me from Delhi. They all said nothing can beat Mumbai’s bhurji and Mohammad Nassir’s bhurji.