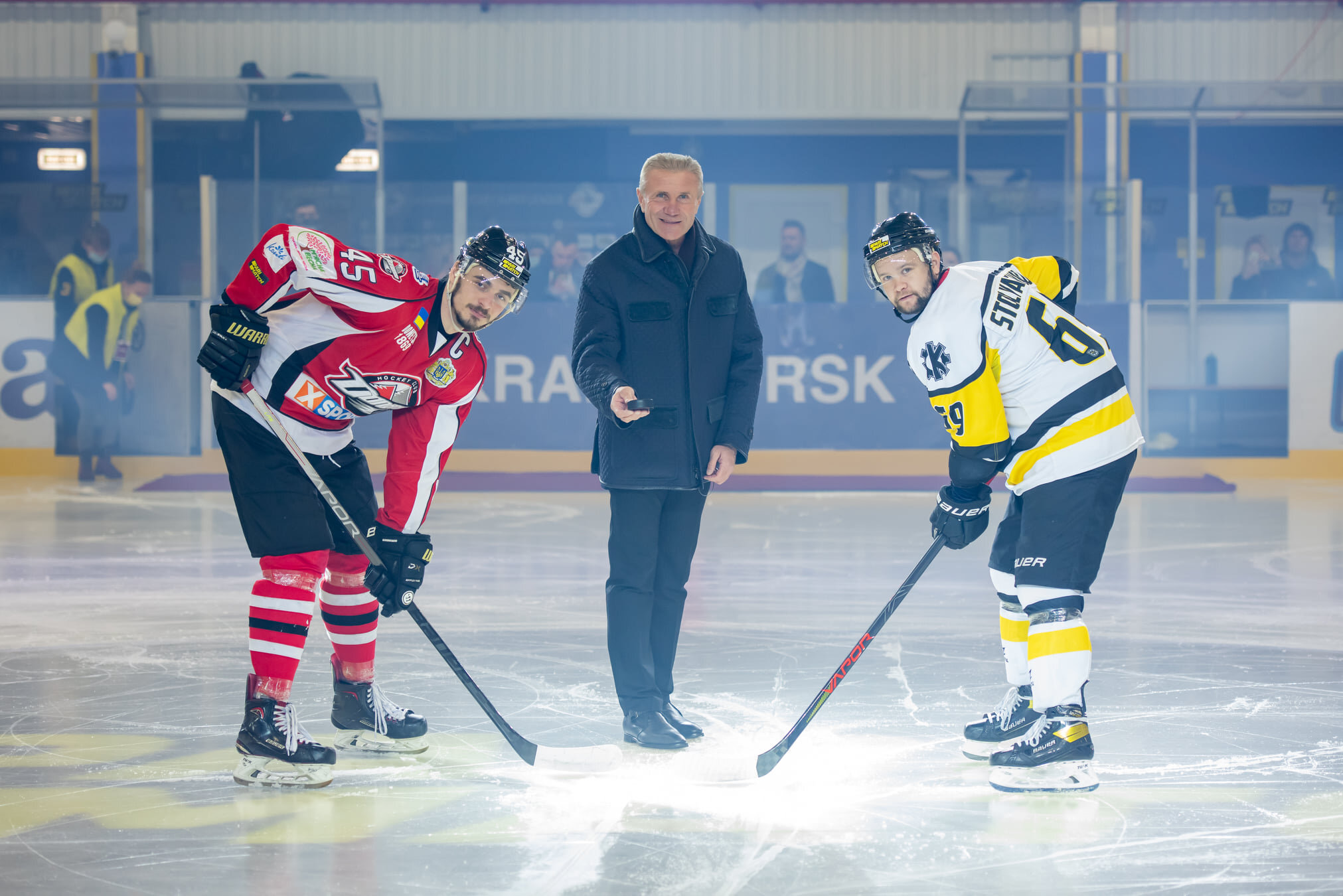 Shorthanded due to the ongoing civil war among Ukrainian domestic leagues, Ukraine’s national hockey team put on a brave face over the weekend even as it struggled to keep pace at the Christmas Cup – the latest in a series of Euro Hockey Challenge events ahead of next April’s world championships.

The previous Euro Hockey Challenge event, in Budapest, Hungary from November 12-13, ignited a civil war in Ukrainian hockey that continues to cut deep.

On the eve of that tournament, Donbas Donetsk and HC Kramatorsk recalled some of their players in violation of national team commitments. The Ukrainian Hockey League (UHL) suspended the players from the domestic league. Donetsk and Kramatorsk continued to play the players, resulting in their expulsion from the league.

Like South Park’s Cartman, Donbas owner Borys Kolesnikov essentially told the UHL: “Screw you guys – I’m going home” and took his team, the teams of allied owners, his media partners, and corporate sponsors, and started his own league, the Ukrainian Hockey SuperLeague.

The Ukrainian Hockey Federation (UHF) recruited new teams to its rump UHL and recruited media partners and corporate sponsors of its own.

Then came the battle for players – and public relations.

Sanctioning the Unsanctioned
The first front in this civil war was a legal one.

Donbas filed first, arguing that the UHF’s suspension of its players violated Ukraine’s Labour Code since the players were employees of the team and were being kept from working by the federation.

The federation shot back, issuing a notice that any players participating in the SuperLeague will face sanctions, saying in a statement

This has incensed Serhiy Varlamov, a former NHLer and General Director of the SuperLeague. In an open letter to Heorhiy Zubko, President of the UHF, he addresses players directly:

“I urge you to act exclusively within the framework of the Law and not carry out the criminal orders of leadership of the UHF … I ask you to inform me personally about all the facts of pressure on you, as on the bodies of sports justice. I guarantee the provision of legal assistance and protection to all victims of the UHF.”

As in any war, you need to align your allies.

So, to shore up legitimacy, the sides called in the big guns.

Vying for Prominence
The next front to open was the battle for influence, or alliance-building.

The SuperLeague drew the opening salvo by having Ukrainian National Olympic Committee President Serhiy Bubka, also of Donetsk, drop the ceremonial puck at the SuperLeague’s inaugural game. He sat for an interview with the SuperLeague’s press service afterwards.

“Today there should be as many clubs as possible to have greater competition”, Bubka told the SuperLeague. “When there is competition, then the quality of our players will increase … Today we need to unite efforts, do what we can to have as many clubs as possible … throughout Ukraine. Then the championship will be more competitive, and the league will be stronger, so the quality of the game will increase.”

Bubka was traveling and not available for comment over the weekend, but his office referred the Kyiv Post to a statement that read:

“The NOC of Ukraine [hopes to] initiate a round table meeting to discuss the existing problems between the Hockey Federation of Ukraine and hockey clubs in order to establish a constructive dialogue and resolve issues”, adding that Bubka and Ukrainian Youth & Sports Minister Vadym Gutzayt hope to meet directly with the UHF.

Not to be outdone, the UHF brought in IIHF President Luc Cardiff, who also met with Bubka and Gutzayt.

“Of course, I am well aware of the situation in Ukrainian hockey … because the case in Ukraine is unprecedented,“

he said in a release that clearly sided with the federation.

Money Matters
Of course, money makes the world of sports go ‘round.

One of the main disagreements that precipitated the current civil war was over league sponsorship and TV rights.

Before the division of the Ukrainian Hockey League, games were played on Ukraine’s XSport, owned by Kolesnikov.

After an audit, Zubko accused XSport of not only not paying the league for broadcast rights, but of actually receiving payment from the league to play the games on television.

Zubko also accused Kolesnkikov of tanking a sponsorship deal the league had made with sports betting site VBet that would have seen the UHL receive millions of UAH for broadcast rights. Donbas is sponsored by VBet rival Parimatch.

The fragmentation into two leagues saw the rival betting companies back competing leagues – Vbet the UHL, Parimatch the SuperLeague.

Likewise, the SuperLeague is being broadcast by Kolesnikov’s XSport, while the UHL has worked with local broadcasters and streams games on YouTube.

The Player Conundrum
The final front of this civil war is the battle for players.

After the initial split, both leagues scrambled to find additional teams – often with a side of nastiness.

After Bila Tserkva Bilyy Bars followed Donbas and Kramatorsk to the SuperLeague, many of its players and coaches stayed in the UHL to form Brovary Sports & Professional College (BSPC).

This has been a boon for Ukrainian players and those in the region at or near retirement.

Druzhkivka Altair, a team founded after the launch of the SuperLeague, coaxed 41-year-old Denis Kochetkov out of his recent retirement to become their player-coach.

Viktor Shakhvorostov, who played with Donbas in 2015-16, was coaxed to the SuperLeague’s Sokil Kyiv from Russian second-tier team HC Rostov. In an exclusive interview with the SuperLeague’s press service, he explained his reasons for returning.

“Family – plus they offered the best conditions”, he told the press service. “I thought [about it], weighed the pros and cons. It’s just that there were more advantages here [including family], so I made the decision.”

Still, even with the influx of hockey teams and players into the country, the ban on SuperLeague players from the national team can be felt.

Christmas Cup
The first victim of this mess has been the Ukrainian national hockey team, which dropped all three matches at last weekend’s Christmas Cup in Poland.

Ukraine started the tournament well, pushing Hungary to overtime before a terrible giveaway in the extra frame saw the team fall 2-1 with just 8 seconds left in the game.

It was another tight game against the favoured French in game two, but some heroics in goal by Serhiy Pisarenko meant the French required a diving goalmouth save in the game’s final moment to secure a 2-1 win.

Ukraine was flat in the third game, and never looked to bother host Poland as they fell to 0-3 with a 4-1 loss.

The Christmas Cup is part of the Euro Hockey Challenge – a series of exhibition tournaments between similarly-ranked nations designed to give players national team experience ahead of the year-end IIHF tournaments.

Ukraine hosts the next tournament, from February 10-12 at Kyiv’s Palace of Sport before travelling to Katowice, Poland to play in the 2022 IIHF World Hockey Championships Division 1B. Held from April 25 – May 1, Ukraine will play Estonia, Japan, Lithuania, Poland, and Serbia for the chance to be promoted to Division 1A.

Whether or not they will field a full team by then remains to be seen.

Like all wars, a great deal of good will and diplomatic leadership will need to be seen before then.