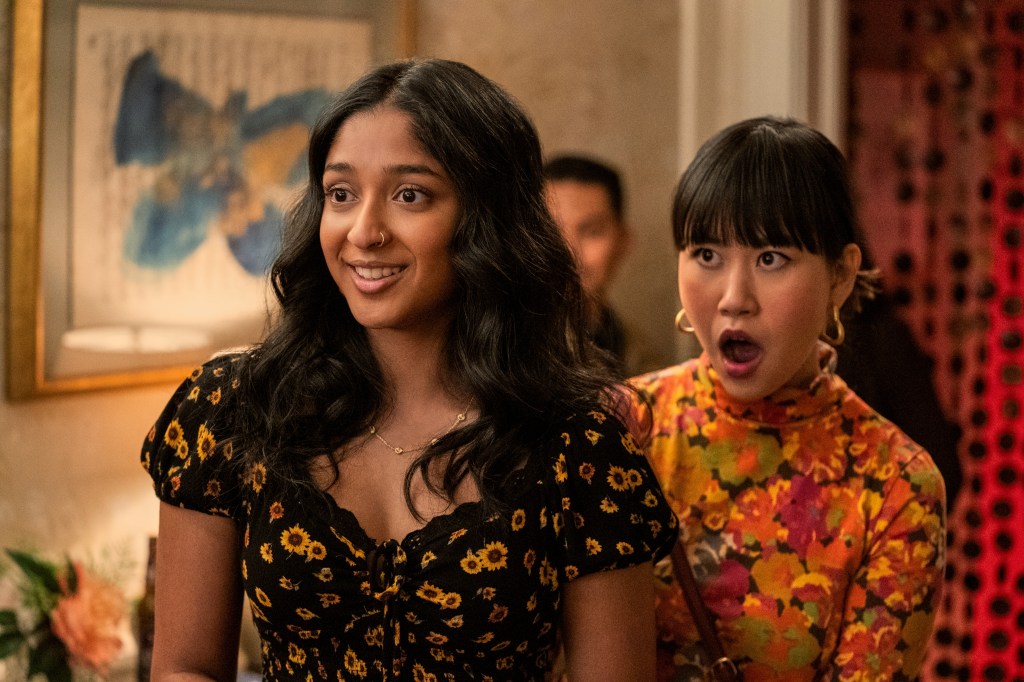 With Netflix’s “Never Have I Ever” now speeding toward its senior season, series star Maitreyi Ramakrishnan shared what sets it apart from other high school shows — its heart.

“We pack a punch into a good old half-hour comedy,” Ramakrishnan told Variety in an interview ahead of the show’s Season 3 launch. “It’s very heartwarming. Real things are being spoken about, in a way that it’s natural. It’s organic, it’s relatable. And that’s why many people — not just young South Asian, brown girls — can relate to it.”

Crediting the show’s uniquely-drawn characters and smart, poignant writing, fans have now devoured three seasons worth of high school hijinks, watching as Ramakrishnan’s Devi Vishwakumar evolved from hot-headed over-achiever (with John McEnroe as her inner narrator) to a slightly-less impulsive teen still trying to find her place in the world. And as the comedy follows Devi and the kids of Sherman Oaks High as they navigate friendships, family expectations and relationships (including the ever-evolving Team Paxton vs. Team Ben love triangle), the characters — and the actors who play them — have learned some valuable life lessons.

Darren Barnet’s Paxton is a grade ahead of Devi and her crew, so his character’s senior year storyline was particularly impactful.

“Stop trying to please everyone’s expectations of you,” Barnet said, relaying what he learned during his tenure on the show. “Because all you will do at the end of that is disappoint yourself. And that’s really who it needs to start with, before you start pleasing others. Be true to yourself, do you and love with all you have. Don’t hold back.”

Through his journey playing chronic over-achiever Ben, Lewison discovered a new mantra: “Perfection is the enemy of art.”

With that new mindset, the actor has realized that “within chaos, you can really find inner peace,” he shared. “I’m trying to incorporate that in my real life where perfection is kind of an impossibility and being able to be comfortable in the fact that messiness can be really awesome, can really help me in my personal life and my own growth and help me be a better person and a better friend.”

Speaking of friends — on camera, Devi and her besties Fabiola (Lee Rodriguez) and Eleanor (Ramona Young) have transformed from the group formerly (and rudely) known as “The UN,” to a trio of confident queens in the making. Their growth offscreen is evident as well.

Young says her primary takeaway from working on this show has come from being in “the presence of women who are literally just doing it all,” like the show’s creators Mindy Kaling and Lang Fisher.

“Just being in their presence affects and inspires me to be like, ‘Wow, you can like really do this and be a great human being,’” Young said.

For Megan Suri, playing Aneesa, Devi’s romantic-rival-turned-friend, has shown her the value of confidence, especially for women.

“I’ve learned confidence and kindness can go hand-in-hand,” Suri explained. “It’s really cool to be confident and doesn’t make you conceited, or doesn’t make you full of yourself. I hope that more women embody that. We’re just taught to dim our light down or not be too loud in a room. Aneesa is the perfect representation of someone who can be confident, but can still be on the same wavelength, kind, as well. It doesn’t have to be one or the other.”

Likewise, Richa Moorjani (who plays Devi’s older cousin Kamala) has seen important parallels between her personal life and her character’s journey to independence, which she considers a rare blessing that has left her feeling more empowered.

“It’s not often that you get to play a character that you relate to so much,” Moorjani said. “I am on the same journey as Kamala of learning how to stand up for myself and to speak my truth and put my happiness first, even if that means upsetting my family or other people around me… I don’t know if that’s just a cultural thing, or just being a woman, or being a human being, but I just feel like I have grown alongside Kamala so much.”

Overall, Moorjani noted that each season has explored the concept of “loving yourself.” She explained: “For all three — Devi, Kamala and Nailini — a huge theme of the entire series has been ‘How do we love ourselves and what does that look like?’”

Poorna Jagannathan’s (Devi’s mother Nalini) personal takeaway can be chalked up to “learning how to love harder, deeper and closer, and yet letting people go at the same time,” but she also acknowledged the important evolution in the entertainment industry that the series represents.

“I’ve been acting for a couple of years, and I remember that every pilot around an Asian or Middle Eastern family would get killed in the pilot stage,” Jagannathan explained. “To be able to have four seasons of a show where you follow an immigrant families in this multi-generational household and see how nuanced they are, and see how they experience joy and grief just like everyone else, and normalize what that looks like, has been super empowering and important.”

Personal growth has also been the name of the game for Ramakrishnan, who memorably beat out 15,000 actors for the series’ lead role, which marked her professional acting debut.

“I’ve learned a lot in these past few years of my life, gone through a lot of change,” Ramakrishnan began. “One [lesson] that I have really reminded myself in this past bit is that no matter what happens, I’m going to be okay.”

She continued: “There’s a lot of times in my life where I get very nervous. I get very anxious and scared, and I overthink and I get stressed. But I remind myself that it’s going to be okay, no matter what happens. I should trust in myself that I’ve worked hard, and I’m a cool person, and who knows what’s gonna happen. It’ll be alright.”

Season 3 of “Never Have I Ever” is now streaming on Netflix.