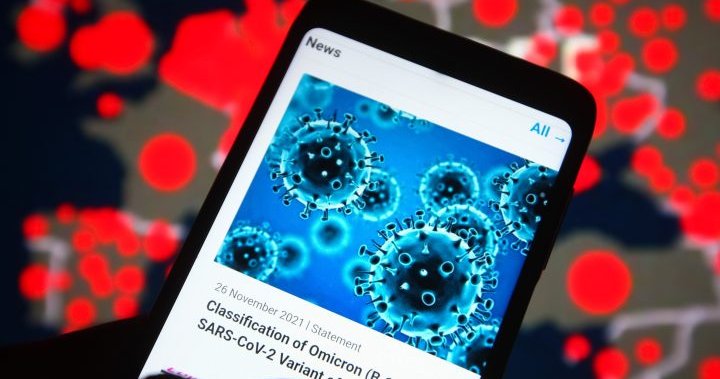 The emergence of a new COVID-19 variant has raised alarm across the world, with several countries swiftly moving to impose travel bans in an effort to clamp down on its spread.

The Omicron variant — first identified in South Africa — was designated as a variant of concern by the World Health Organization (WHO) on Friday.

It has become the fifth and latest variant of concern to be categorized as such since the start of the COVID-19 pandemic.

A variant of concern has the potential for increased transmissibility, severity of illness or decreased effectiveness of vaccines, treatments and public health measures, according to WHO.

Cases of Alpha, Beta, Gamma, Delta and now the Omicron variant have been detected in Canada.

Here is what we know so far about the Omicron variant and how it compares with the other variant of concern.

The B.1.1.529 variant, now officially called “Omicron” according to the WHO naming system, was first reported by South Africa on Nov. 24, the WHO said in a press release on Friday. The first known infection with the variant was from a specimen collected on Nov. 9.

Since then Omicron has been detected in at least 10 other countries across five continents.

This variant is more heavily mutated than the other variants of concern, containing more than 30 mutations, which experts fear might help it spread easily or even evade antibodies from prior infection or vaccination.

Omicron contains the E484 mutation, which is also found in the Beta and Gamma variants. The E484K mutation decreases the ability for antibodies to bind to the spike protein of the virus. This means vaccines and therapeutics like monoclonal antibodies, which are laboratory-made proteins that mimic our immune system’s ability to fight off the coronavirus, are less effective, experts say.

On Sunday, the WHO said it is not yet clear whether Omicron is more transmissible or causes more severe disease compared to the other variants. No deaths related to this variant have been reported as of yet.

“Preliminary evidence suggests there may be an increased risk of reinfection with Omicron, as compared to other variants of concern, but information is limited,” the global health body said on its website.

But unless more data comes in, it remains unclear what the exact impact of this variant could be on vaccine effectiveness.

“We don’t know if one of the current vaccines that are used, at least in Canada, are going to be effective against Omicron because it certainly has a whole slew of mutations compared to some of the existing variants,” said Dr. Donald Vinh, an infectious disease specialist and a medical microbiologist at the McGill University Health Centre.

“It really is best to act prudently and perhaps even overzealously in terms of our public health measures and our vaccination aggressiveness until we have a better idea of what exactly Omicron can or can’t do,” he added.

Common symptoms associated with the Omicron variant are “completely different” than what has been observed with other variants and the original strain of SARS-CoV-2 first detected in Wuhan, China, according to Dr. Horacio Bach, an infectious diseases expert at the University of British Columbia.

As of Monday, Canada has confirmed five cases of the Omicron variant: four in Ontario and one in Quebec.

The Delta variant or B.1.617.2 sub-lineage was first discovered in India in October 2020. It was designated as a variant of concern by WHO in May 2021 and thereafter by the Public Health Agency of Canada in July 2021.

Since then, Delta has become the dominant variant of SARS-CoV-2 around the world, spreading to more than 100 countries. Delta has a total of nine mutations, according to covariants.org.

Canada’s first cases of Delta were detected in April 2021 and have been rising ever since.

Evidence suggests that the Delta variant spreads much more easily than other variants. According to the U.S. Centers for Disease Control and Prevention (CDC), the Delta variant is more than two times as contagious as previous variants.

It has also been shown to cause worse outcomes among those infected.

Vinh said the Delta variant can also make you sick if you have been vaccinated, though not sick enough to need hospitalization.

“But if you are unvaccinated, then certainly Delta can land you into a hospital,” he added.

Some U.K. researchers say headaches, a sore throat and a runny nose are the most common signs associated with the Delta variant.

While the original coronavirus took up to seven days to cause symptoms, Delta can cause symptoms two to three days faster, giving the immune system less time to respond and mount a defence.

The Delta variant has also been shown to reduce the benefits of vaccines.

With Delta variant becoming the dominant form of the virus, the other variants of concern have gradually petered off, both Vinh and Bach said.

The Gamma or the P.1 variant was first detected in Brazil in November 2020 and it was designated as a VOC by the WHO in January 2021.

Canada reported its first cases of Gamma in February and classified it as a VOC in May.

The Gamma variant has 12 mutations, according to covariants.org.

Some studies have suggested that this particular variant has the potential of causing reinfection, raising concern about the effectiveness of treatments and vaccines.

The Omicron variant is not the only variant of concern first detected by South Africa.

The African nation also documented the world’s first cases of the Beta or B.1.351 variant in May 2020.

This variant has 11 mutations, including the E484, which is also found in the Gamma and Omicron variant.

The Alpha or B.1.1.7 variant was first detected in the United Kingdom in September 2020.

Like Beta, it was designated as a variant of concern by the WHO in mid-December last year and by PHAC on May 14, 2021.

The Alpha variant has 10 mutations, including several shared mutations with Beta, Gamma, Delta and Omicron.

A survey in January by the U.K.’s Office for National Statistics (ONS) found that people who had tested positive for the Alpha variant were more likely to report coughing, sore throat or fatigue as symptoms of COVID-19.

— with files from Canadian Press, Reuters