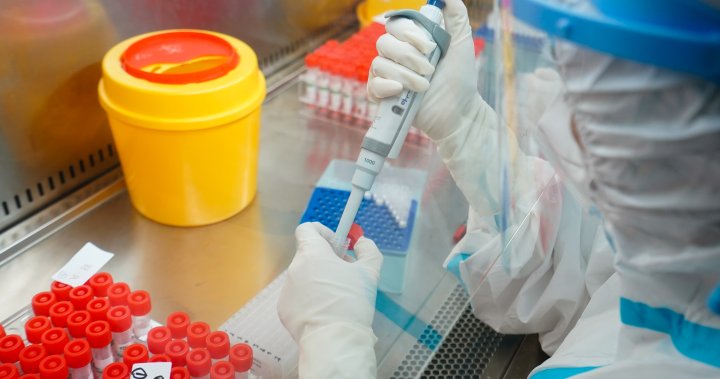 Ontario is reporting 18,445 new COVID cases on Saturday, the fourth day in a row the counts continue to break daily records for positive infections. The provincial case total now stands at 774,806.

However, Public Health Ontario cautions that due to recent changes in testing availability amid the highly infectious Omicron variant that the report is “an underestimate of the true number of individuals with COVID-19 in Ontario. As such, data should be interpreted with caution.”

Saturday’s count edges out record-breaking daily case counts reported on Friday which saw 16,713 new cases, Thursday at 13,807 and Wednesday with 10,436 new infections, as the Omicron variant continues to sweep Ontario.

The death toll in Ontario has risen to 10,206 as 12 more deaths were recorded.

Resolved cases increased by 4,769 from the previous day. There have been a total of 652,114 recoveries.

Dr. Kieran Moore, Ontario’s chief medical officer of health, said on Thursday that there is now widespread community activity due to Omicron with an average of 1 in 3 tests coming back positive for COVID.

Moore said the focus is being shifted away from reporting on cases as that surveillance is no longer necessary and more towards hospitalizations and ICUs to protect the health-care system. In turn, the province no longer has the ability to test every single person who wants a test.

“If we had ability to test everyone, 14.7 million people, whenever they got ill we would have done so. But no country around the globe has that capacity. So this is not a coverup. This is basic premise of a limited finite resource that we have to use,” Moore said during a press conference Thursday.

“I don’t think anyone is being fooled that we’re not having widespread community activity across Ontario,” Moore continued.

On Thursday, the province made sweeping changes to PCR testing to detect COVID-19.

PCR testing is only recommended for symptomatic people who are hospitalized patients, in long-term care or retirement homes, health-care workers, First Nations, or students and staff, among other high-risk groups.

It is no longer recommended that asymptomatic individuals get a PCR test, except for those in high-risk settings.

“Members of the general public with mild symptoms are asked not to seek testing,” the Ontario government said Thursday.

The move comes as capacity for PCR testing has become strained across the province with many unable to book a PCR test or get test results back in a timely manner.

In addition, those who test positive on a rapid antigen test will no longer need to confirm they have COVID-19 through a PCR test.

The isolation period is also being reduced for those who are fully vaccinated, and children under 12 years old, from 10 days to five days following the onset of symptoms, a move the U.S. Centers for Disease Control and Prevention took earlier this week.

However, people who are unvaccinated or are immunocompromised will be required to isolate for the previous recommendation of 10 days.