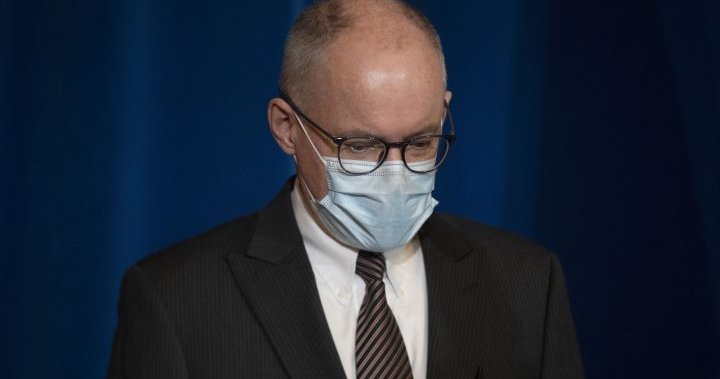 Ontario’s top doctor said Wednesday that he would not recommend a tax on those who aren’t vaccinated against COVID-19 and said that Quebec’s plan seems “punitive.”

Dr. Kieran Moore was asked during an unrelated press conference Wednesday for him comments on Quebec’s planned tax on the unvaccinated and whether Ontario should consider a similar measure.

“We have not made that recommendation to government ever throughout this pandemic,” Moore said.

“It’s not one that we would bring forward. It does, in my mind, seem punitive. We have always been supportive of adults making informed decisions for vaccination and trying to increase availability and accessibility.”

Moore said that vaccines have only been mandated in the “highest risk” settings, namely long-term care.

“The increased death rate, the increased risk of severe outcomes had to be balanced by maximizing immunization and protection of those individuals,” Moore said.

“That is as far as this government has gone in terms of mandating vaccination and putting a penalty on those that have not been vaccinated has not been entertained by this government.”

2:45
Trudeau waiting on details of Quebec’s proposal to tax the unvaccinated

Global News reached out to the Ministry of Health and Premier Doug Ford’s office, asking whether the government would consider a tax on the unvaccinated but did not receive a response.

Quebec Premier Francois Legault announced plans Tuesday to impose a tax on any unvaccinated Quebecers who don’t have a valid medical exemption.

Only 10 per cent of Quebec’s population is unvaccinated, Legault said, but he said they make up 50 per cent of patients in intensive care beds.

“A health contribution will be charged to all adults that don’t want to get vaccinated. We are there now,” Legault said.

“I think it’s normal that the majority of the population is asking that there be a consequence.”