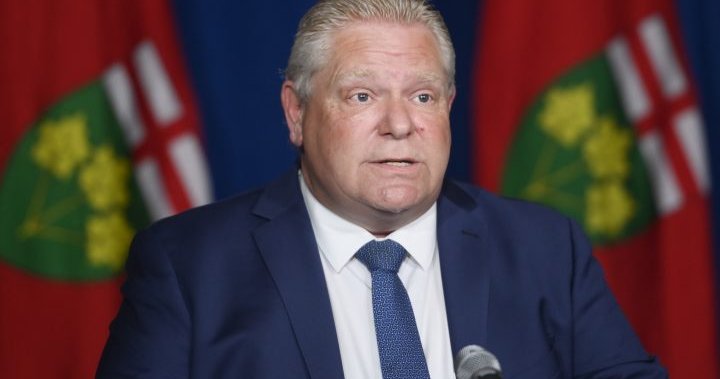 The Ontario government says it will not be moving forward in enacting a mandatory COVID-19 vaccination policy for hospital workers.

The province said it made its decision after speaking to hospitals and health-care partners about the potential impact a policy of that magnitude would entail and based on “real-world evidence here in Ontario and across Canada.”

In a statement released Wednesday afternoon, the Ford government said it is a complex issue but pointed to the negative impact a similar policy had on the healthcare system in B.C., where more than 3,000 workers were terminated, forcing the cancellation of surgeries and diagnostic tests.

“Quebec has now abandoned theirs altogether because of the significant risk an abrupt loss of thousands of health care workers posses to delivery critical services,” the province added.

Hospitals, local medical officers of health and other health-care organizations were asked to provide input and on Monday, Health Minister Christine Elliott said the province had enough information to make its decision.

Despite the decision to not make it a mandatory policy across the province by the government, several hospitals have already implemented their own mandates and have seen roughly two per cent of staff placed on unpaid leave or terminated because of the policies.

Elliott said hospitals are free to continue to implement their own mandates. She said the Ontario Hospital Association (OHA) said it supported a mandatory policy but that other hospitals told the province they were concerned about what it would do to their health human resources. Elliott would not name those hospitals.

When asked if the province was putting people at risk with the possibility of being treated by an unvaccinated healthcare worker, Elliott responded by saying workers undergo rigorous testing.

“We will continue to monitor the situation in our hospitals very closely and take additional action if warranted,” the province said Wednesday.

“At this time, however, the evidence tells us that because of the measures currently in place, including vaccination rates, regular testing and rigorous IPAC practices, our hospitals remain safe for patients and staff members who care for them.”

Shortly after the announcement, the OHA said it was “disappointed” with the province’s decision.

“Our province has spent almost two years in a tireless fight against COVID-19 and the impact on our economy, on the healthcare system and on human health has been devastating. At this important juncture, Ontario cannot afford to let its guard down,” the statement read on behalf of the association’s president and CEO Anthony Dale.

The association went on to point out that hospitals are already required to have “communicable disease policies in place requiring proof of vaccination/immunity for 17 conditions, including measles, rubella, varicella and tuberculosis.

“COVID-19 should be treated no differently.”

“If the government’s making decisions based on facts then they should be showing people what it is that they’re making their decisions on. The minister has just indicated she’s not prepared to do that,” Horwath said. “The experts made it clear that no unvaccinated person should be working in health-care settings with the most vulnerable folks amongst us.”

Liberal House Leader John Fraser accused the government of “fear-mongering” by not being transparent about its decision making.

Doris Grinspun, head of the Registered Nurses’ Association of Ontario, called the decision “a disgrace to patients and to the great majority of health-care workers who desperately are supporting mandatory vaccination.”

Meanwhile, also announced on Wednesday was the province expanding availability for certain groups to receive their booster shots/third dose of a COVID-19 vaccine.

—With files from The Canadian Press

#BREAKING: Ontario will not require mandatory vaccinations for healthcare workers. Minister of Health due to speak to reporters on this at 3:30 #onpoli pic.twitter.com/mOIE19gPDj