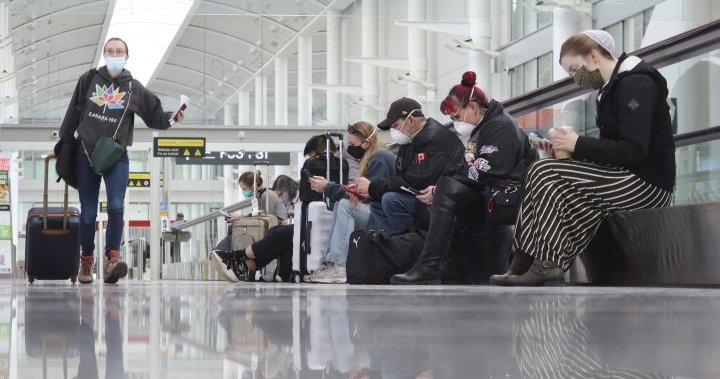 With Canada further easing COVID-19 restrictions at its borders, travel experts are seeing a surge in demand for international trips, but summer bookings for Europe are modest amid concerns about the ongoing Russia-Ukraine war.

Starting April 1, fully vaccinated travellers will not be required to show proof of a negative COVID-19 test upon entering Canada. The federal government had already eliminated the pre-arrival PCR test requirement last month, allowing travellers to show a rapid antigen test instead.

Beginning next month, neither will be needed for vaccinated travellers entering the country. However, they might still have to undergo random testing upon arrival, but won’t have to quarantine while awaiting their results, the Public Health Agency of Canada announced on Thursday.

Other than the added cost and hassle of taking a test before boarding a plane, travellers don’t have to worry about being stranded in a foreign country and extending their stay if they test positive for COVID-19 while abroad, Vanderlubbe said.

Even before the PCR test rule was scrapped late last month, travel in and out of the country was on an upward trend.

In February, more than 169,000 international visitors arrived from abroad at Canadian airports, representing an over 12-fold increase compared to the same time last year, according to Statistics Canada.

Among the foreigners that flew into Canada last month, 73,200 came from the United States and 96,100 from other countries.

Martin Firestone, a travel insurance broker in Toronto, said the lifting of the testing requirement coupled with other measures announced in recent weeks is going to have a “huge effect on travel.”

He said insurance sales for the month of March are already higher than pre-pandemic levels in 2019.

“The bottom line is to all those traveling after April 1, now it’s a relief to not have to get tested to come back into the country,” Firestone told Global News.

The latest announcement is also being widely welcomed by the tourism sector still recovering from the economic devastation caused by the COVID-19 pandemic.

The Tourism Industry Association of Canada said dropping the pre-entry testing requirements for incoming travellers signals that the country is “open for tourism again.”

The Canadian Travel and Tourism Roundtable issued a similar statement on Thursday, lauding the government’s decision.

“This positive development will bring Canada into better alignment with other major countries, is a recognition that the Canadian travel and tourism industry has long been among the country’s safest, and brings the industry closer to a return to normal,” the group said.

As of April 1, 2022, fully vaccinated travellers no longer need to complete a pre-entry test. This is a long-awaited milestone for Canada’s tourism sector and a huge step towards recovery. Read more: https://t.co/Q7OMroU5WE pic.twitter.com/KwjTvQpvLg

The tourism industry has been among the hardest hit in Canada during the COVID-19 pandemic.

In 2020, Canada’s tourism sector lost 50 per cent of its revenue and nine per cent of its businesses — the worst year on record for the industry that also saw 900,000 workers lose their jobs — according to figures shared with Global News by Destination Canada.

It is estimated that the country suffered a loss of $15,722 million in revenue from international tourism in 2020, with Ontario and British Columbia taking the biggest hit, a Destination Canada report showed.

As border measures are rolled back, Destination Canada expects visitors from the United States to spur recovery efforts, projecting 2.2 million American travellers flying into Canada and contributing $2.3 billion to the Canadian economy this year.

“With restrictions lifting on April 1 and our U.S. spring and summer campaign set to launch on the same day, we are laser-focused on driving revenue back into tourism business across the country and we are ready to capture this enormous opportunity,” said Marsha Walden, CEO and president of Destination Canada.

Europe, along with the United States and Asia, are among the top tourist destinations for Canadians during summertime.

But with heightened tensions in Eastern Europe amid Russia’s invasion of Ukraine and the ensuing humanitarian crisis unfolding in the region, many are less eager to book, Vanderlubbe and Firestone said.

“The concern now, of course, is booking ahead for the summer and … about Europe, especially Baltic states and cruises,” said Firestone.

With increasing fuel prices, there is also the possibility that the higher costs will have a trickle-down effect on ticket fares.

Vanderlubbe said those sitting on the fence and choosing the wait–and–see approach should book now before prices shoot up.

“Any spillover from the war in Ukraine into the destinations that Canadians typically travel to is unlikely,” he said.

“I would say for summer and anybody worried about Ukraine … people shouldn’t second guess it and just get it booked.”