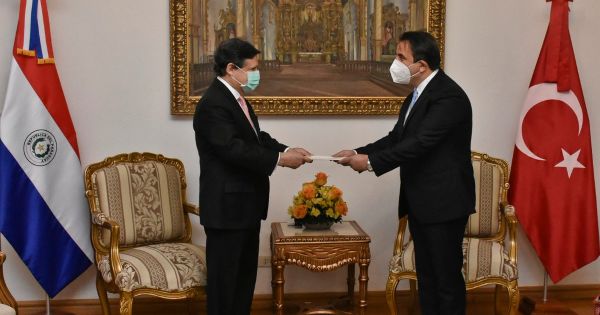 Paraguay-Turkey chamber of commerce not far off

Paraguayan and Turkish authorities met Tuesday in Asunción to discuss the creation of a binational Chamber of Commerce, in light of the increasing volumes of trade between the two countries over the pàst few years, it was reported.

Delegates from Paraguay’s Ministry of Industry and Commerce (MIC) and Turkey’s Embassy in Asunción were joined for talks by industrialists and businessmen from both countries.

Aksen said his country was is one of the 20 largest economies in the world, and thanks to its strategic location it provided access to other markets with more than one billion people. He also underscored Turkey’s recent reforms towards more dynamic opportunities in automatic equipment, machinery and electricity, aerospace and defense, agrifood, infrastructure and finance.

The diplomat also pointed out Paraguay was the rising economy in Latin America thanks to its macroeconomic strength and policies, due to which it ended up one of the countries least affected by the COVID-19 pandemic from an economic angle. Aksen also stressed that both countries have great potential which is not yet reflected in the figures.

He also reaffirmed the mutual will to improve bilateral ties and announced that a Turkey-Paraguay Business Council was to be created within the Board of Foreign Economic Relations (DEİK) linked to the Ministry of Commerce.

There are currently 147 Business Councils within DEİK, in which Paraguay is not yet a part, and that these councils are essential to increase contacts between entrepreneurs and help improve economic and commercial relations.

The Ambassador highlighted that relations between the two countries were to be taken to the next level with the establishment of the Paraguay-Turkey Chamber of Commerce in Asunción.

Also present at the meeting were Turkey’s Commercial Counselor to Paraguay Biray Kuş, who is based in Buenos Aires, as well as Paraguay’s Honorary Consul in Istanbul, Cengiz Deveci.