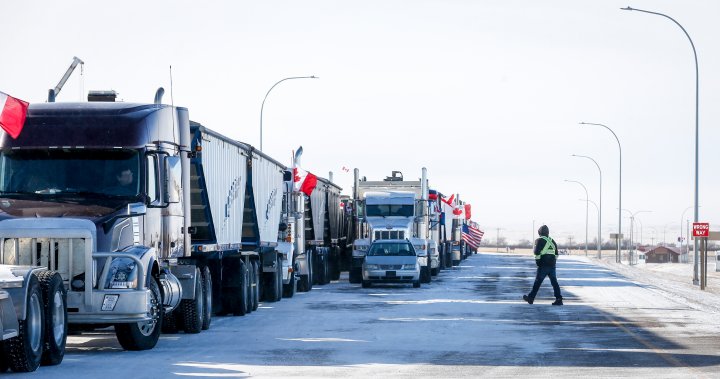 One lane each way has been cleared on the highway at the main United States border crossing in southern Alberta but a new problem began late Wednesday night.

Many of the original protesters still remain in Coutts but moved their trucks over to the right side of the highway after an agreement on a partial pull back was reached earlier in the day.

Movement at Coutts border on 5th day of blockade, one lane open in each direction

But the expected stream of trucks heading toward the U.S. border didn’t materialize.

Another blockade had set up 18 kilometres to the north near Milk River. A long line of RCMP vehicles, with their lights flashing, blocked off the highway as hundreds of vehicles continued to gather on both sides of the highway with their horns blaring.

“The RCMP have made some progress to re-open Hwy 4 from Milk River to the border. Currently travel is impeded at the north part of Hwy 4 where motorists can expect an RCMP escort to the border,” the Alberta RCMP said in a tweet.

This is a look at RCMP set up north of #Coutts at around 6:30pm –
Police have since tweeted they are now escorting vehicles in. ⬇️
RCMP said earlier today the opening of lanes by convoy truckers is to allow access to residence, workers crossing border and emergency vehicle. https://t.co/6QsZN3PDBU pic.twitter.com/W1w2KJ5rRr

Police say they will continue to work with the blockade participants to re-establish safe passage.

“Due to ongoing protest activity and congestion that could endanger the safety of the officers and the public, these escorts will continue until further notice.”

There was no sign of any vehicles attempting to weave their way through the trucks, tractors and semi-trailers to seek an RCMP escort.

Traffic was clear from Coutts north to Milk River but RCMP vehicles blocked most side roads as a precaution.

‘It was terrifying’: Woman says family vehicle was hit during rush of Coutts protesters

Earlier in the day, RCMP Cpl. Curtis Peters said one lane of access was available in the north and southbound lanes of the highway, but there were indications it could be temporary.

“We are just continuing to monitor and engage in dialogue with the protest group, or the reported organizers or leaders of it, in an effort to continue moving toward a complete reopening of the highway.”

Demonstrators began parking their trucks and other vehicles near the crossing Saturday in solidarity with similar events in Ottawa and countrywide to protest COVID-19 vaccine mandates and broader public health measures.

1:43
Stuck truckers finding ways to get around the Coutts border crossing blockade, but Alberta beef industry out of options