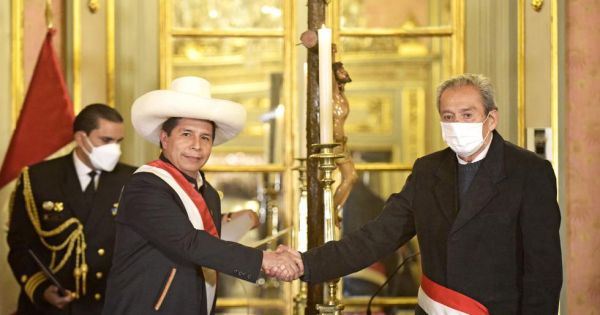 Peru’s Congress Tuesday passed a motion of censure against Education Minister Carlos Gallardo who must now turn in his resignation. President Pedro Castillo has 72 hours to accept it.

By 70 votes against 38 against and 7 abstentions, the national Parliament found Gallardo had links with extremist organizations and leaked the questions of the 2021 teacher appointment exam, among other controversial issues which rendered him unfit for the position.

The investigation into the alleged leak of the content of the exams had been initiated against Lucinda Vásquez, a legislator for the ruling Peru Libre party, and Ynés Gallardo Calixto, the minister’s daughter.

In principle, I do not have to resign, I do not think it is fair to assume a guilt that I do not have and I believe that the decision that Congress makes tomorrow, whether in favor or against, we have to respect, Gallardo had said Monday.

Gallardo’s is just another case of corruption for Castillo, who has already been involved in quite a few of them and even survived an impeachment motion in Congress less than five months after taking office. But Castillo is also under attack from his own Perú Libre leftwing party, which has accused the head of state of having leaned towards the right. Castillo himself has survived the attacks but several of his cabinet members and some top aides have not.

Consequently, this agreement will be communicated to the President of the Republic so that the provisions of Article 132 of the Political Constitution of Peru and paragraph B of Article 86 of the regulations of the Congress of the Republic are complied with, Congress Speaker María del Carmen Alva said.

Renovación Popular spokesman Jorge Montoya said Gallardo deserved to be sacked for the irregularities in the evaluation of teachers. “The process should have been canceled; he did not (do it), and we had to pass a law to be able to annul it. That is the reason for the censure: if he cannot provide administrative solutions to protect the unions, he does not deserve to remain in office.”