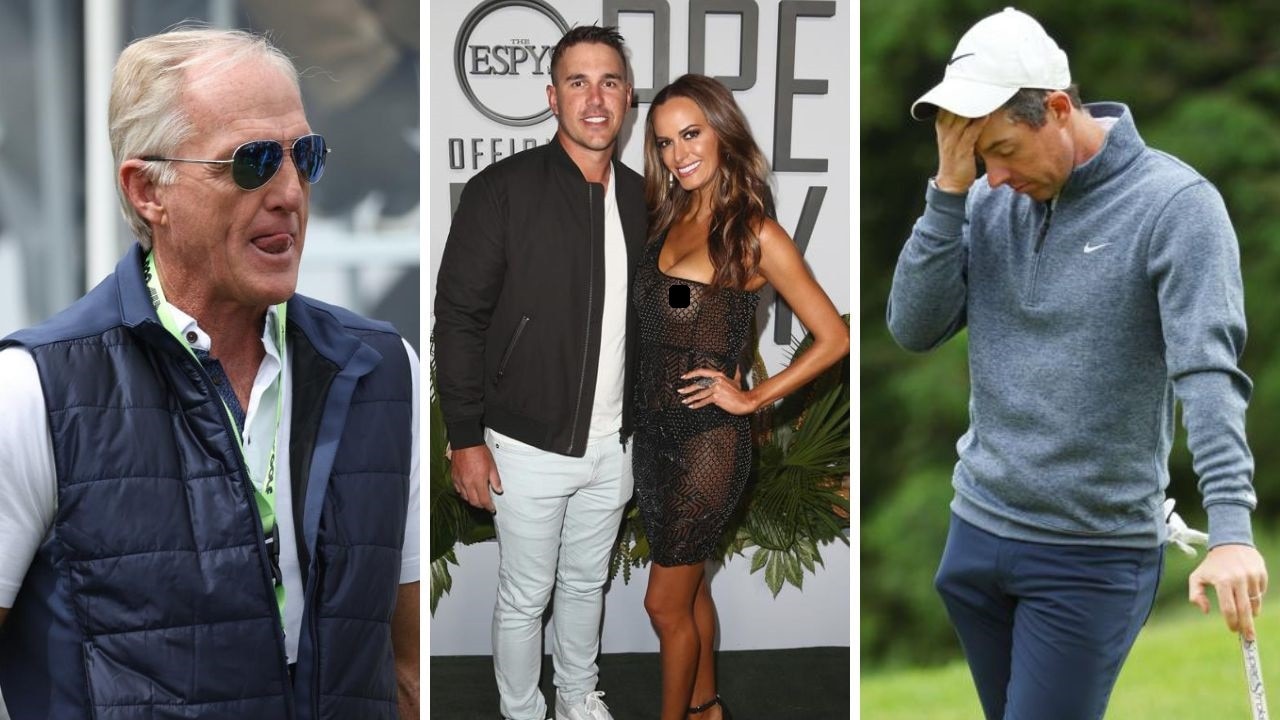 The PGA Tour is fighting back against Greg Norman and his Saudi friends, announcing a sweeping overhaul as a golf war erupts.

PGA Tour Commissioner Jay Monahan announced a sweeping overhaul of the circuit in a move designed to dissuade players from defecting to the Saudi-backed LIV Golf series, as Rory McIlroy slammed certain players for defecting to the breakaway circuit and acting in a “duplicitous” fashion.

At a press conference in Connecticut on the eve of the tour’s Traveller’s Championship, Monahan confirmed details of a plan that leaked out earlier in the week to revamp the PGA tour.

The sweeping reforms include a return to a calendar year season starting in 2024, and the creation of three international events at the end of the season.

The moves are the PGA Tour’s most significant response yet to the rise of LIV Golf, which launched earlier this month and has signed eight of the world’s top 50 players including major winners Dustin Johnson, Phil Mickelson and Brooks Koepka.

In remarks to reporters on Thursday (AEST), Monahan said the PGA Tour would be unable to compete financially with LIV Golf, which is spearheaded by Aussie legend Greg Norman and bankrolled by Saudi Arabia’s Public Investment Fund, which has assets estimated at around $900 billion.

“I am not naive,” Monahan said. “If this is an arms race and if the only weapons here are dollar bills, the PGA Tour can’t compete.

“The PGA Tour, an American institution, can’t compete with a foreign monarchy that is spending billions of dollars in attempt to buy the game of golf.

“We welcome good, healthy competition. The LIV Saudi Golf League is not that. It’s an irrational threat; one not concerned with the return on investment or true growth of the game.”

Human rights groups and critics of LIV say the venture is an attempt by Saudi Arabia to boost the kingdom’s image through sport, a practice that has been dubbed “sportwashing”.

The circuit, being promoted by Norman, has spent lavish sums attempting to recruit the world’s top talent, offering signing bonuses reportedly in the region of up to $300 million.

Monahan said the threat posed by LIV Golf had “obviously accelerated” the PGA Tour’s plans to revamp the schedule.

“We were planning on raising purses to these events in the future, OK?” Monahan said.

“The move that we’re making at the start of 2023, there’s no question that one of the things that we’re looking to do is make certain that our top events are maximised both in terms of their consequence and the financial investment, and this is an acceleration of that.

“So, yes, this is, that, this is something that we’re doing to respond on behalf of our members to the current environment that we’re in.”

Monahan, who earlier this month suspended 17 current or former members of the PGA Tour who had signed with LIV, meanwhile expressed dismay that four-time major champion Koepka had decided to jump ship.

Koepka was confirmed in the field for LIV Golf’s debut US event in Portland next week just as Monahan began his press conference.

“Listen, every player that’s left, I’m going to say I have great admiration and respect for the contributions that they have made to the PGA Tour,” Monahan said.

“And I’m disappointed that Brooks Koepka has left and has joined the LIV Golf series. I haven’t had a chance to talk to him about it, and I look forward to having a conversation with him, but I’m not going to share any more than that at this point in time.”

Koepka was slammed as a hypocrite for joining LIV after earlier saying he wasn’t motivated by cash.

Asked if he was surprised by Koepka’s decision to become the latest big name to follow the money, Irish star Rory McIlroy replied: “Yes, because of what he said previously.

“I think that’s why I’m surprised at a lot of these guys because they say one thing and then they do another, and I don’t understand that and I don’t know if that’s for legal reasons or if they can’t — I have no idea.

“But it’s pretty duplicitous on their part to say one thing and then do another thing.”

McIlroy said he hoped world golf would eventually form a truly global circuit similar to the ATP Tour in tennis.

“I would like to see, and I’ve always advocated for something where the tours work more closely together or we create some sort of world tour model or ATP model,” McIlroy said.

“Where there’s different events going on in different areas of the world, but they’re all governed under one umbrella.

“I would like to see the PGA Tour and the European Tour start to work more closely together and maybe try to forge a path to where all the biggest golf events in the world are under the same umbrella.”

Asked if he believed it could happen, he added: “It’s hard to say at this point, but I would like to think that it’s a possibility.”