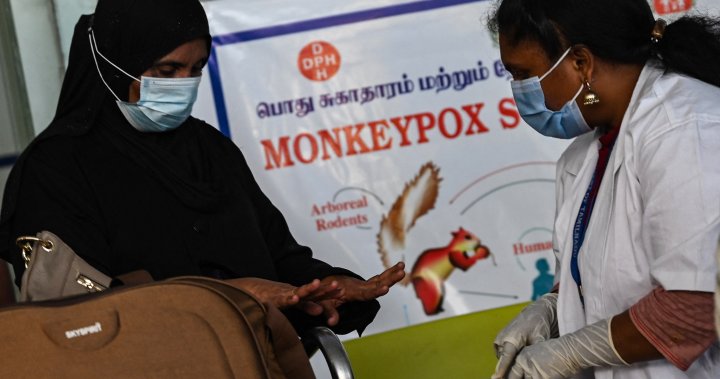 Quebec health authorities are reporting another 30 new cases of monkeypox, for a total of 171 since the start of the outbreak in the province.

The latest figure is from Monday and is up from the 141 cases declared in the province last Friday.

Quebec’s Health Department says 5,895 doses of vaccine have been administered since May 27 to curb the biggest outbreak of the disease in Canada.

Last week, Montreal officials expanded the city’s vaccination campaign to all men who have sex with men, and in Toronto, authorities started holding clinics to immunize high-risk individuals.

Reports of monkeypox in semen prompts WHO investigation

The rare disease comes from the same family of viruses that cause smallpox, which the World Health Organization declared eradicated around the globe in 1980.

Smallpox vaccines have proven effective in combating the monkeypox virus.

Monkeypox generally does not spread easily between people and is transmitted through prolonged close contact via respiratory droplets, direct contact with skin lesions or bodily fluids, or through contaminated clothes or bedding.